LAWRENCE — A University of Kansas professor has written the latest in a series of best-selling textbooks designed to introduce students to statistics in a fun, engaging, humorous way that acknowledges the anxiety the subject can produce and helps students to hate statistics a little less. 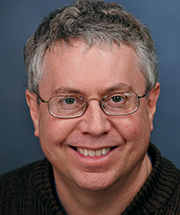 “Statistics For People Who (Think They) Hate Statistics,” by Bruce Frey, was recently published in its latest edition, the seventh. He inherited the mantle from his mentor Neil Salkind, a former KU faculty member who not only shared a love for statistics and teaching, but a sense of humor with his protégé.

“When I was a doctoral student at KU, one of my mentors and friends was Neil Salkind. I was able to be a research assistant for him, and when I became a faculty member in the same department, he was a great colleague,” Frey, professor of educational psychology, said. “He put together a series of popular books in the style he became known for, explaining scary scientific topics in engaging, funny and non-scary ways.”

Following his retirement, Salkind continued to write the series on statistics and gained a following. Though he died a few years ago of cancer, Salkind arranged with his publisher, SAGE, for Frey to take over as the author. This month, the latest entry in the series, “Statistics for People Who (Think They) Hate Statistics: Using Microsoft Excel 5th Edition” was published. The two books guide students in using statistics in the social sciences using both SPSS and Excel — two different tools.

Each edition of the books is updated with the input of detailed feedback from professors and students who use them in institutions across the country. Frey said Salkind’s brilliance was in recognizing the anxiety many students face when dealing with the topic and writing in a style that not only showed them they were capable of understanding it, but admitting that parts of the topic are difficult and different from other content they cover in college.

“Statistics, at its heart, is a unique field,” Frey said. “You have to accept that there are some things that will be strange and not seem to make sense. It was always important to Neil to separate these books from the ‘For Dummies’ series. Even though we simplify these concepts, that does not mean skipping something that is important or difficult, and it does not mean dumbing it down.”

The Excel version contains an introduction to the popular spreadsheet program, its application to statistics and detailed chapters on how Excel can specifically be used for procedures ranging from simple correlations to inferential techniques to analysis of variance. Along the way, Frey injects humor — including the self-deprecating variety in which he acknowledges he’s older than the average reader of the book — pop culture references and the occasional absurdity, all while acknowledging the value of each concept and its practical applications. Saying an idea is easy to understand, especially when it is said by an expert in the field, does not make it so, Frey said, adding he strives to make difficult concepts relevant and understandable.

Frey has long written about statistics, including the book “There’s a Stat for That! What to Do and When to Do it,” a title designed to help researchers, faculty and grant writers determine which method of analyzing data is right for their study design.

Frey has also completed work on a four-volume edition of SAGE Encyclopedia of Research Design: 2nd Edition, forthcoming later this year. Like the statistics books, Frey originally worked with Salkind, who was editor of the first edition. Formerly associate, he’s now the sole editor. The encyclopedia is designed as a guide for researchers, scholars and students to determine how best to answer research questions they may have and the specific research design methods to do so.

The new edition contains thousands of entries written by scholars and experts. About half of the entries are newly written or updated. The encyclopedia can guide researchers in how to consider and measure variables, select a sample, how to analyze data, form research questions, identify hypotheses and more. Frey likened the guide to a dissertation student meeting with a research committee to discuss the essential research question, then formulating how to answer it.

“In the topic of research design, there is a lot that is new. In this second edition, there are many new entries for social network analysis, for example, or in qualitative research, or machine learning and big data analysis as well,” Frey said.

Helping students learn the importance and relevance of statistics and aiding scholars in finding the proper research methods is a fulfilling way to continue the legacy of his faculty mentor and friend, Frey said.

“It’s cool to me to think that after Neil retired, he still had this secret life as an author of popular textbooks. We had similar writing styles and senses of humor, though mine tends to be a little more absurd, where his was maybe more classical,” Frey said of Salkind, who was also known to include his famous brownies recipe in his books as a reward for completion. “Now I get to talk with professors, students and consumers of the books. Neil was always very communicative with readers, and it’s a real honor to continue his legacy.”