LAWRENCE — A call by a University of Kansas researcher to document the struggle to commemorate civil rights martyr Emmett Till in Mississippi has led to the creation of a display doing just that at the Smithsonian National Museum of American History. 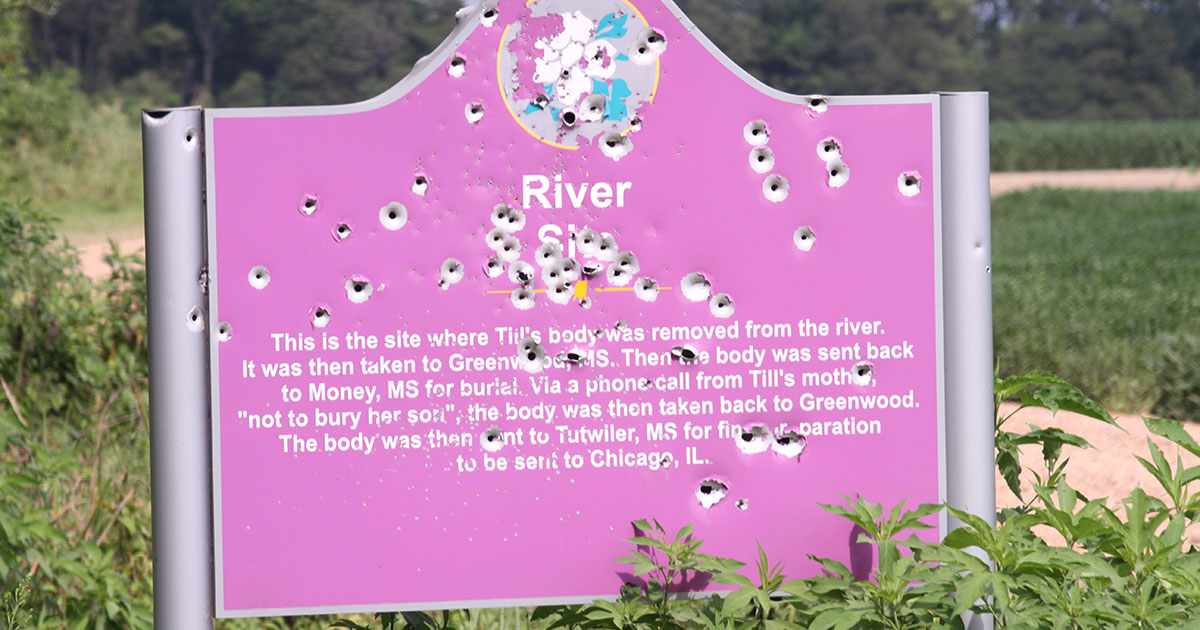 Dave Tell, professor of communication studies and author of the 2019 book “Remembering Emmett Till," will moderate a discussion Sept. 2 with the Rev. Parker Wheeler, a cousin of Till's who witnessed his 1955 kidnapping, before the exhibition opens to the public the following day.

It was Tell’s 2019 New York Times opinion column that led to the creation of “Reckoning with Remembrance: History, Injustice and the Murder of Emmett Till.” The exhibition will run through Oct. 5 in Flag Hall on the museum’s second floor before becoming part of its permanent collection.

“The title of the New York Times piece was ‘Put the vandalized Emmett Till signs in museums,’” Tell said, “and it was not too long after that that I got a call from officials at the Smithsonian, saying they saw my article, and they said, ‘You're right, these do belong in a museum.’

“I don't think my article was the only thing propelling the creation of this exhibit. But ... they told me it was part of it.”

The exhibition’s centerpiece is a purple memorial sign that was repeatedly riddled with bullets after it was erected in 2008 at the site where Till’s ravaged body was recovered from the Tallahatchie River.

Tell said he began conversations last year with curators at the Smithsonian, thinking the exhibition would wind up in the new Museum of African American History & Culture. But that museum already has an extensive exhibition that deals with the nation-shaking influence of the Till case. So the new exhibition becomes part of the National Museum of American History.

“The exhibit starts with the efforts of a community activist named Jerome Little in the 1970s, organizing Tallahatchie County residents to break the long, local silence that had enveloped Till’s story. In 2005, Little led the charge to create the Emmett Till Memorial Commission, a nonprofit dedicated to using the Till story to pursue racial reconciliation.”

Tell noted that the Memorial Commission, which he has served as an adviser, started off by offering apologies to the Till family — which was a first. That is documented in the exhibition, he noted.

“The first line of the apology is ‘We believe that racial reconciliation begins with telling the truth.’ Because, for the commission, the reason they put up these signs and tell the Emmett Till story is not about getting the facts right, although that's important,” Tell said. “The real motivation is trying to change the future, trying to pursue reconciliation in the present. This exhibit really stresses that dialectic between past violence, present fragility and a hope for a more just future.”

Tell said he was skeptical when he first got involved with the Till Memorial Commission that truth-telling could lead to reconciliation in the Mississippi Delta.

“Truth is a necessary condition but not a sufficient condition,” Tell said. “It's a starting place but not an ending place. And for what it's worth, that's how it has played out over the last 14 years in Tallahatchie County. They started with telling the truth, and that has moved on to a remarkable number of people within the county moving toward racial reconciliation and things happening between the races that have never happened before.

“It spurred, for example, the removal of Confederate paraphernalia in some of the local stores. It has also spurred the creation of one of the area's only Black woman-owned restaurants. It has spurred some of the area's first-ever cross-racial dialogues about the Till story.

“That's why I have come around to it over the years. They started off with telling the truth, and 14 years later they can point to very particular things that say, ‘Look, reconciliation is happening in our community.’”