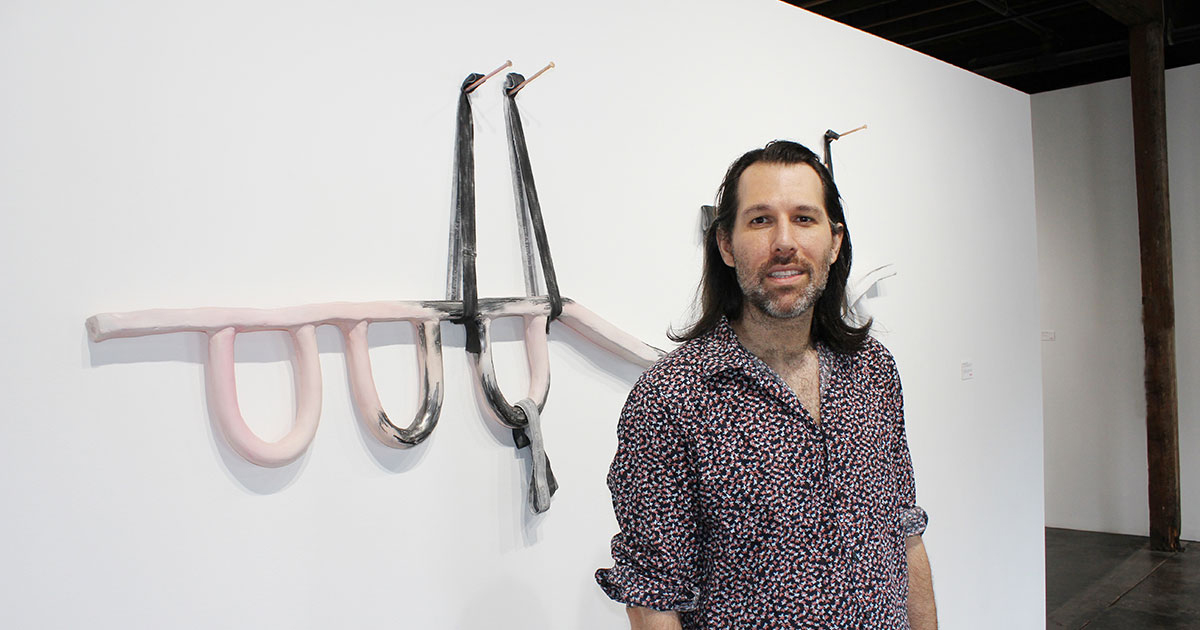 LAWRENCE – For Benjamin Rosenthal, "queering" the gallery for his new solo exhibition at Studios Inc. involves more than a sense of the body through drawings of phallus-like shapes and incorporating Calvin Klein underwear bands. It’s in how he mixes up drawing, painting, sculpture and video art forms.

The University of Kansas associate professor of visual art has a new show titled “And the band played on, and on on,” which runs through Sept. 24 in the front gallery of the Kansas City, Missouri, nonprofit organization dedicated to helping midcareer artists. Rosenthal received a three-year artist’s residency, which consists of over 2,000 square feet of studio and display space. He received an additional year in the studio extension program. This show is a culmination of that work.

“The title of the show refers to the Titanic, the sinking ship on which the band kept playing on, but also the movie from 1993 that addresses the AIDS pandemic, which is still happening,” Rosenthal said. “And so, for me, this work is very much queer work. This work has subtle and suggestive references to the queer experience in image, material and language — and sometimes not so subtle.  But I think for people in the LGBTQ community, the COVID-19 pandemic has a different relationship to us because of the distinction between the rapidity with which we push to fight this pandemic, and the lack of energy from a governmental and a public standpoint in addressing the AIDS epidemic, which killed so many and continues to do.

“That is quite striking, and so I think the exhibition is cheeky but also solemn, because there is an element of thinking about desire but also death and loss and the way those things will intersect.”

Rosenthal favors a fleshy, almost internal, pink tone in his sculptures, sometimes blackened as if by fire, other areas fading to cool, ghostly white. Rosenthal said that one of the pieces, “Portrait of a ghost[ed] image, (mirrored, breathless(ed)),” matches his 6-foot-2-inch height. Another even taller construction was inspired by a particular, slouchy (and almost embarrassed) gay bathhouse or sex-club pose, he said. This is the sort of large-scale work that his Studios Inc. residency particularly enabled.

The show also contains one of Rosenthal’s colorful video works, a 90-second original, animated loop projected from the ceiling onto the floor of the gallery. Rosenthal said it functions as a transition from one part of the exhibition to another, as well as on its own.

“It’s almost a medical point of view, observational, standing from above,” Rosenthal said. “It's not as much like entertainment; like watching a TV on the wall. It's very much a part of the space and a part of the trajectory between the different objects in the exhibition.”

All in all, Rosenthal said, the exhibition “is not just about sexual identity, or gender identity, although that is very much a part of it. But it's also, from a theoretical and philosophical point of view, a way of recategorizing or rethinking or destabilizing what is normative, what is normal. So when I queer things, when I think of myself as queer, or to queer the space of the gallery or queer an object or queer language — participating in active queering — I am hoping to destabilize what we think that should be or what we think it is. So a body is not necessarily a stable category in the way in which we think about bodies being normative, being binary gendered, being nondisabled. There are so many different ways in which we expect bodies, language and images that reference our bodies, particularly, to be normative. But when we queer them, they become in-between categories. They're always evolving and changing and shifting based on what's in proximity to them or around them.

“I'm interested in queering these sorts of boundaries between body and object, between language and fragment, between drawing and painting ... If I can open up beyond the categories that I expect, and that are expected, I can create new possibilities or new futures or new potential outcomes.”

The studios.gallery is located at 1708 Campbell St., Kansas City, Missouri, and is open 10 a.m.-4 p.m. Tuesday through Friday and noon-4 p.m. Saturdays. Masks are required.