LAWRENCE — Andrea Follmer Greenhoot, a professor of psychology and director of the Center for Teaching Excellence at the University of Kansas, has been named director of an 11-university consortium known as the Bay View Alliance. 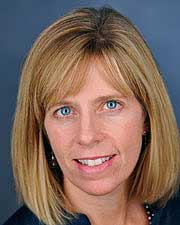 As director, Follmer Greenhoot will lead the organization’s efforts at improving teaching and learning at research universities in the United States and Canada. She succeeds Lorne Whitehead, a professor of physics and astronomy, a special adviser on entrepreneurship, innovation and research, and former provost of the University of British Columbia, who had led the BVA since its founding in 2011. Whitehead has assumed the role of immediate past director and will remain a member of the organization’s leadership team.

The transition was confirmed by James Staros, chair of the BVA Governance Committee, at the semiannual meeting of representatives from the universities that make up the organization.

“Lorne was instrumental in founding the BVA, and his leadership has been central in positioning the organization with strength for the future,” Staros said. “Andrea has worked alongside him for the past three years as associate director and will continue his tradition of innovative leadership.”

Follmer Greenhoot has been associate director of the BVA since 2018 and a member of its leadership team since 2016. She also leads a BVA-affiliated project known as TRESTLE, which is exploring ways of using department-embedded expertise and community building to improve teaching and learning in STEM courses. That project is financed by a $2.5 million grant from the National Science Foundation. She is also a co-leader of another BVA-affiliated project known as TEval, which is working to transform the evaluation of university teaching. That project is financed by a $2.8 million NSF grant.

“All of that work will be crucial as universities regain momentum after the pandemic,” Follmer Greenhoot said. “The BVA is in an excellent position to provide leadership and ideas that improve the way universities approach teaching and learning in a time of constant change.”

“The BVA has a vibrant membership that gives it enormous potential,” Whitehead said. “It has developed into a vital intellectual community that makes the individual campuses and members stronger and wiser. I am so pleased to welcome Andrea into her new role, and I look forward to exciting developments in the coming years.”

About the Bay View Alliance

The Bay View Alliance is a network of 11 research universities in the United States and Canada working to identify more effective approaches to teaching and learning, and to develop and study strategies to foster cultural change that leads to the adoption of improved teaching methods at universities.