LAWRENCE — The Robert J. Dole Institute of Politics at the University of Kansas has announced that it will livestream a special event featuring former Colombian president Juan Manuel Santos at 7 p.m. June 10 on the institute’s YouTube channel.

“We are excited to welcome President Santos back to the institute,” said Bill Lacy, director of the Dole Institute. “He will be discussing his new book about his work on ending the Colombian Civil War. His efforts to end the 50-year-long conflict led to him winning the 2016 Nobel Peace Prize. 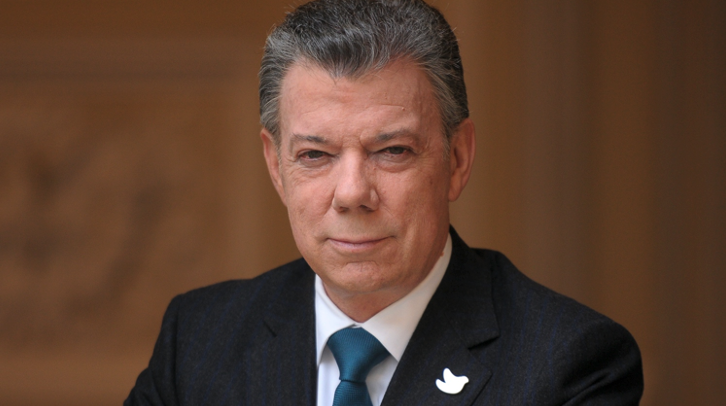 “In his book ‘The Battle for Peace,’ Santos shares the lessons he learned about war and peace and how to build a successful negotiation process in the midst of a conflict where a resolution seemed impossible. While Santos is clear that there is no handbook for making peace, he offers conflict-tested guidance on the critical parameters, conditions and principles as well as rich detail on the innovations that made it possible for his nation to find common ground and a just solution.”

Santos was president of Colombia from 2010 to 2018. Prior to becoming president, Santos had a long career of public service in Colombia, including as minister of foreign trade, minister of finance and public credit, and minister of national defense. Santos prepared for these roles by attending KU, through postgraduate studies at the London School of Economics and Harvard University, as a Fulbright Fellow at the Fletcher School of Law and Diplomacy and in the Nieman Foundation for Journalism at Harvard University. He is founder and chairman of the board of Compaz Center of Resources for Peace, which works for the empowerment of victims, the consolidation of peace, the reduction of poverty and inequality, and the defense of the environment in Colombia and the planet.

This special program will only be livestreamed to the institute’s YouTube channel and its website, www.doleinstitute.org. Follow the Dole Institute on Facebook, Instagram, or Twitter for updates regarding this and future programming. This program is co-sponsored by the University Press of Kansas and the KU Alumni Association. The Association features Santos on the cover of Kansas Alumni, its quarterly magazine, and highlights an excerpt from his book. The magazine is available at kansasalumnimagazine.org.

The Dole Institute of Politics is dedicated to promoting political and civic participation as well as civil discourse in a bipartisan, philosophically balanced manner. It is located in KU’s west district and houses the Dole Archive and Special Collections. Through its robust public programming, congressional archive and museum, the Dole Institute strives to celebrate public service and the legacies of former U.S. senators Bob and Elizabeth Dole.