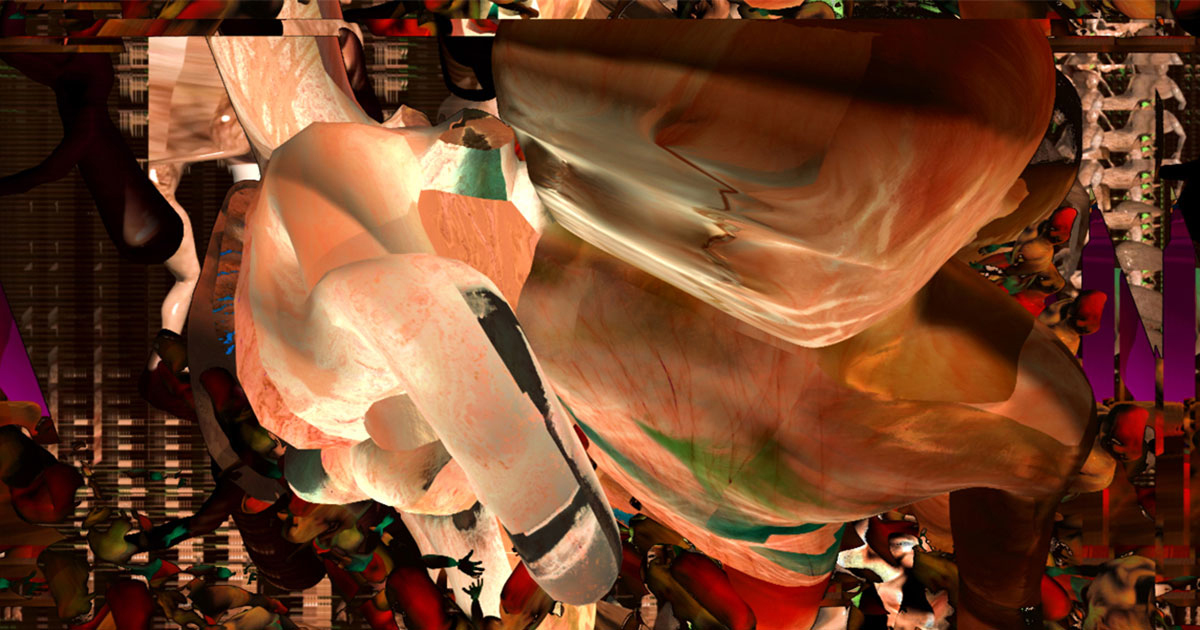 LAWRENCE – Who’s an essential worker during a pandemic, when people are asked to stay home to stop the spread? Grocery clerks, sure. Truckers. EMTs. But what about artists?

Making art is Benjamin Rosenthal’s raison d’être. The associate professor of visual art took some qualified risks and expended great effort during the pandemic year of 2020 to make some work. The result is an eight-minute video titled “the gleaners, and: ritual for signaled bodies” that he produced in collaboration with Eric Souther, assistant professor of video art at the New York State College of Ceramics (NYSCC), School of Art and Design at Alfred University.

It premieres virtually Feb. 19 at the fifth annual Performing Media Festival sponsored by the Ernestine M. Raclin School of the Arts at Indiana University South Bend.

“As an artist, it feels really important,” Rosenthal said. “And while I absolutely believe in the need for and the veneration of those who are on the front lines of the pandemic, I think that there is a sort of collective disregard for the needs of culture, much of which is failing at this time because it requires the presence of an audience to exist. I find art essential to my existence. I am not whole or complete in any form unless I'm making art and developing work, and so to be able to do this in a responsible manner was particularly incredible.”

Rosenthal, who creates original video works, said he was drawn to NYSCC Alfred University’s Expanded Media lab, where Souther is one of the key faculty members who continues to draw upon historical experimental media practices and technologies while building new hybrid analog and digital systems to keep the conversation between artists, toolmaking and video as a creative medium.

Owing to COVID-19 safety protocols, Rosenthal drove nonstop both ways and combined a visit to family in New York City with a testing, quarantine and masking regimen before and during his two-week stay in Alfred. He was on sabbatical during the fall semester.

“Going into a place where there are other people working at the top of their game and making art is essential,” Rosenthal said. “It's essential to our being that we have to make work. There's the urgency to reach out to others that I think a lot of us have been feeling in this pandemic. Eric and I are both so technologically engaged that people might think, ‘Oh, why wouldn't you do something like this exclusively over Zoom?’ But it would not have been possible.”

Rosenthal said that by working side-by-side with Souther (if more than 6 feet apart and masked), he was able to create something truly collaborative with intensity, speed and a responsiveness not possible otherwise.

Rosenthal and Souther conceptualized the work in the first few days of the collaboration via conversations discussing the relationships among queerness, bodies, ritual and signal.

“The piece organically grew out of continued conversation and technological innovations we discovered along the way,” Rosenthal said.

Rosenthal had produced a few 3D models before arrival that they utilized to start to construct performative systems around. Utilizing Souther’s expertise in a program called Touch Designer, they developed systems to activate animations that allowed for real-time control of rotation, position and scale of the joints in the rigged models. Many of the videos they generated in the first few days became backdrops, additional videos to wrap onto the bodies and attached to a virtual “light” they could project onto the 3D landscapes.

“You're two people sort of making things together and responding and recording it live as you're playing it, versus rendering an animation out for an extended period of time,” Rosenthal saod. “My usual process is much slower than his. But because of these new systems and because of the ability to work with Eric, it allowed both of us to do that rather quickly and responsively. We were able to make work that spoke to both of our interests in fragmenting media, fragmenting the body, rethinking that stability.”

For his part, Souther said he felt an equal partner on the project, both conceptually and in its execution.

“You don't often find a collaborator with whom you can have a good, 50-50 split on both concept and technology,” Souther said.

Both artists said they were pleased with the end product and have entered it into a number of film and media festivals around the world. There will be an outdoor screening April 23 in Kansas City, Missouri, as part of the exhibition “In My Own Skin,” curated by Kimi Kitada of the Charlotte Street Foundation. And Rosenthal said he and Souther have already begun planning a further, multichannel permutation of what is now termed a single-channel, or single-screen, video.

“It can exist in a lot of different formats,” Rosenthal said. “It can mutate as a project.”