LAWRENCE — The University of Kansas’ federal relations director has been recognized for excellence in government affairs on behalf of higher education by his peers in the Association of Public and Land-grant Institutions.

Jack Cline, associate vice chancellor for federal relations for KU, has been named the recipient of the Jennifer Poulakidas Outstanding Achievement Award by the APLU’s Council on Government Affairs for outstanding contributions and achievements in university governmental relations.

In particular, colleagues nominated Cline for the award in recognition of his leadership in building relationships with the Trump administration and advocating for public higher education. 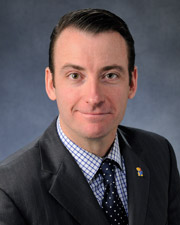 “We are thrilled for Jack to be recognized for his work on behalf of higher education,” said KU Chancellor Douglas A. Girod. “As a group, APLU’s Council on Government Affairs plays a crucial role on behalf of member institutions, and we are proud that Jack continues to be a pillar in that community. In addition to his work in collaboration with the CGA, Jack continues to benefit our university as an adviser to KU leaders and a liaison to key partners in Washington. We are fortunate and proud to have him on our team.”

Cline’s specific achievements and efforts in the past year include the following:

Cline has been at KU since 2012. Before joining KU, he was the assistant vice president for federal relations for five years at the University of Massachusetts. Prior to joining the higher education community, Cline was the executive director of gubernatorial appointments and personnel for then-Massachusetts Gov. Mitt Romney. Before joining the Romney administration, Cline was an executive staff member for Massachusetts Gov. Paul Cellucci and Gov. Jane Swift. Cline also was a professional staff member for former House Speaker John Boehner when Boehner chaired the House Committee on Education and the Workforce.

Cline was a sergeant in the U.S. Marine Corps, having worked for the White House Military Office and the Pentagon. A third-generation GI Bill student/graduate, Cline earned a bachelor of liberal arts from Harvard University. After graduation, he earned his commission in the U.S. Navy Reserve and served as an intelligence officer for five years.