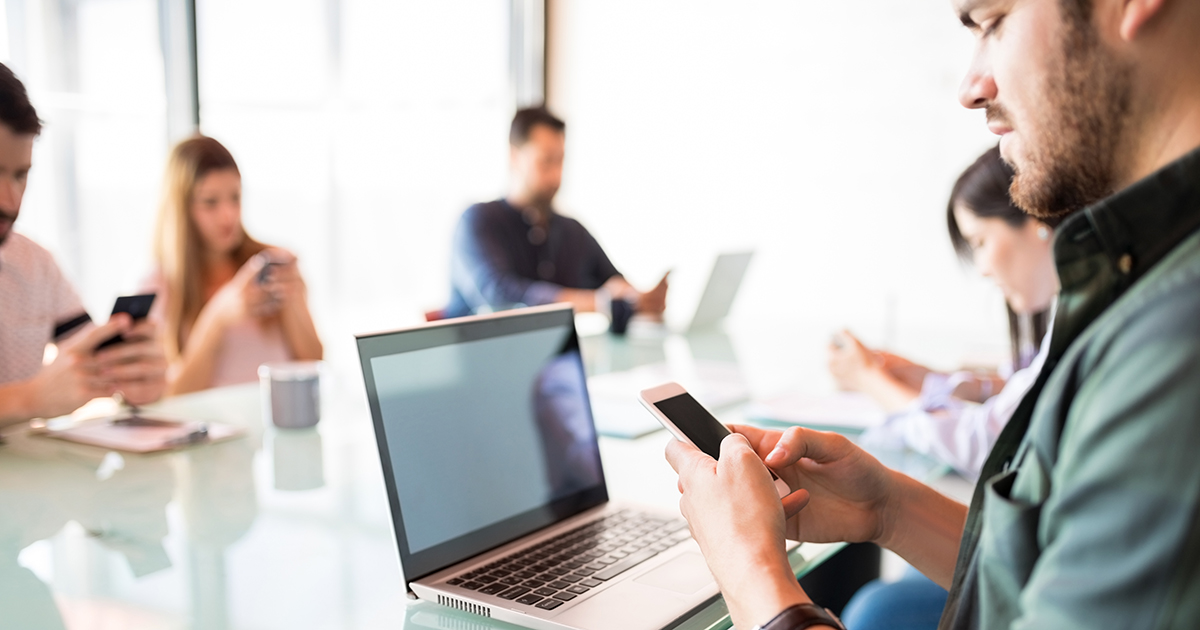 LAWRENCE – To get on the good side of a new boss, colleague or acquaintance in a business meeting, leave your cellphone stashed in your pocket or purse.

That is the implication of a new study conducted by Cameron Piercy, University of Kansas assistant professor of communication studies, and Greta Underhill, KU doctoral candidate. “Expectations of technology use during meetings: An experimental test of manager policy, device use, and task acknowledgment” was published in the journal Mobile Media & Communication.

Looking at your phone during a meeting is akin to “phubbing,” or snubbing, your interlocutor in a strictly social setting, the study found.

The authors prepared video vignettes of people using either a paper notebook, a cellphone or a laptop computer while participating in a business meeting. They refer to this scenario as “multicommunication.” Then they asked 243 viewers to rate the distracted meeting members' competence and the effectiveness of the meeting.

Other variables included the meeting manager’s expectations for technology use in the workplace and whether the users apologized later that their technology use was work-related.

It mattered not whether the cellphone user stipulated afterward that their usage was strictly business-related, researchers found. Viewers still downrated them and to a significant degree more than those who used a computer or notepad.

In a recent interview, Piercy said the results can largely be attributed to a phenomenon known to social scientists as “introspective illusion.”

“We know you can do work on your phone,” Piercy said. But he added that because we also know phones can be used to scroll idly through social media feeds, “we assume that you're not working when we see you're using it.”

This is true even of people who themselves use a mobile device during a business meeting.

“We can always infer our own thoughts and motives, but we can't ever know a partner’s thoughts and motives, so we make negative assumptions about others, and we make excuses for ourselves,” Piercy said. “People expect that technology is used for ill, even when the person using the technology says their use is related to the topic of conversation.”

A manager’s attitude toward technology in the workplace does seem to matter somewhat, in terms of viewers’ evaluations.

“When the manager articulated a policy, those who acknowledged their multicommunication were evaluated higher and seen as more competent,” the authors wrote. “In the absence of a policy, the pattern is reversed. Finally, the means for communicator evaluation and competence were highest in the pro-technology policy condition. In all, when the manager’s policy is matched by employee’s behavior, outcome means tend to be higher.”

“The manager articulating a clear policy about expectations of technology use ought to affect the way that people engage with technology in the workplace,” Piercy said. “But so is the idea that people would be excused if they apologize for using technology. And in that case, we didn't find a significant effect.”

However, the effect of cellphone use on viewers’ perceptions was dramatic.

“The effect for the phone is ginormous,” Piercy said. “It's as big an effect as you'll ever see in a social-science study — 30% of the variance. You can just look at the numbers and see it. But the notebook was less of a problem than the computer, which was less of a problem than the phone. So even if you were to use a laptop in the meeting, you'd be better off than using your phone because there was this big spike in all the numbers that are associated with using the phone, relative to the other two.”

Piercy noted that the study asked viewers to judge the interactions they saw on screen, simulating a meeting with a new person or boss. Attitudes might change, he said, in a situation where all the participants know each other – and the boss’s expectations — well.

Search options »
Subscribe to KU Today
KU in the news
Lawrence Journal-World — Fri, 11/27/2020
Sewage testing for coronavirus infections in Lawrence helps health officials prepare for surges
The Conversation — Fri, 11/20/2020
Rural hospitals are under siege from COVID-19 – here’s what doctors are facing, in their own words
Schools considering cuts to #musiceducation may want to consider new findings from @MusicKU . The work of two… https://t.co/oTmUI3Zb4n
«»
Follow us on Twitter »
Why KU
Apply »
One of 34 U.S. public institutions in the prestigious Association of American Universities
44 nationally ranked graduate programs.
—U.S. News & World Report
Top 50 nationwide for size of library collection.
—ALA
5th nationwide for service to veterans —"Best for Vets: Colleges," Military Times