LAWRENCE — Muhammad Ali famously said, “Age is whatever you think it is.”

While he was speaking metaphorically, a new collection of essays titled “Chronological Age: A Useful Category of Historical Analysis” is taking that sentiment literally. 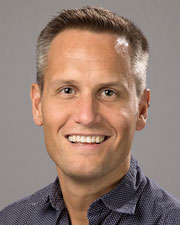 “The forum is making a case that age is not a self-evident fact,” said Nick Syrett, professor and chair of women, gender & sexuality studies at the University of Kansas.

Co-edited with Corinne Field, the forum gathers seven contributions that argue for viewing age through different cultural and historical perspectives. It’s published in the current issue of American Historical Review.

“We’re suggesting to people that the way they’ve been looking at age takes for granted or assumes it has always been as it is now,” Syrett said.

“Age works in relatively stable ways for most individuals today. We have birth certificates and a million methods for proving our age. Part of our point is that has not always been true. It’s been easy to ignore that and just impose age categories onto people in the past.”

Syrett says all societies have been aware of age stages; they can differentiate a baby from an elderly person or a toddler from an adolescent. But in many societies, people did not know their birthdays or how old they were, and it wasn’t important to know.

“Part of my argument in my previous book on child marriage is these marriages are far less significant in the past if you don’t have age categories that matter. So marrying below the age of 18 is not so consequential if people aren’t aware whether they are 18 in the first place,” he said.

Much of the concept of age is tied to our contemporary calendar, a purely human invention that determines birthdays based on a 365-days-per-year system. But there have been methods in other parts of the world that ascertain such numbers in entirely different ways.

“In some pre-colonial African societies, your chronological age was irrelevant. They thought about people in terms of seniority or juniority. What mattered is whether you’re older or younger than those around you,” he said. “In the Confucian calendar, a baby was a year old at birth. So that reconfigures how people evaluate age in other contexts.”

Field and Syrett wrote the forum’s introduction and an article on the relationship of age to gender and race in the United States. Fellow contributions include Sayaka Chatani’s essay on military conscription in Japan, focusing on how an arbitrary decision to set the age at 20 ended up interrupting centuries of coming-of-age rituals. Bianca Premo’s article on Spanish America and Corrie Decker’s on East Africa both show how the colonial imposition of chronological age conflicted with indigenous understandings.

Although modern society has embraced a more formalized system for assessing age, this has introduced its own problems. Ageism is among them.

“Some ageism is less about chronology than it is perceptions of appearance and behavior,” he said. “But until recently, many people had a forced retirement age, even if they still wanted to work. There is a certain kind of bureaucratic discrimination that comes in when people are ineligible for things or forced into roles based on whatever their chronological age is.”

Now in his third year at KU, Syrett has written extensively on subjects ranging from maturity and masculinity to fraternities and queer history. His books include “American Child Bride” (University of North Carolina Press), “The Company He Keeps: A History of White College Fraternities” (University of North Carolina Press) and “Age in America: The Colonial Era to the Present” (New York University Press), a collection of essays he co-edited with Field.

“When I wrote the book on the history of young people and marriage, age of consent was a big part of that,” he said of what prompted this new journal forum.

“Age standards were sometimes really arbitrary. The ways lawmakers used age didn’t always make sense. It was clear to me that few historians had written about chronological age itself, so I wanted to explore it more. Not just age in relation to marriage but age and its own distinct history.”

Search options »
Subscribe to KU Today
KU in the news
KSHB — Tue, 06/23/2020
Kansas and Missouri schools offering courses on pandemic
St. Louis Public Radio — Tue, 06/23/2020
COVID-19 treatment developed in St. Louis to begin human trials
RT @UnivOfKansas : Is there a link between how life evolved and our own economic processes? In his new book, a KU professor examines how evo…
«»
Follow us on Twitter »
Why KU
Apply »
One of 34 U.S. public institutions in the prestigious Association of American Universities
44 nationally ranked graduate programs.
—U.S. News & World Report
Top 50 nationwide for size of library collection.
—ALA
5th nationwide for service to veterans —"Best for Vets: Colleges," Military Times