LAWRENCE — Even a century later, the art world knows Georges Auric’s circle of friends by single names: Picasso, Poulenc, Satie, Cocteau. But few people know the role that the French composer and critic played as a go-between among the fractious groups fomenting such indelible artistic concepts as surrealism, cubism and dada. 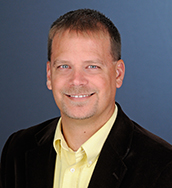 University of Kansas researcher Colin Roust’s new biography, “Georges Auric: A Life in Music and Politics” (Oxford University Press, 2020) is an attempt to set the record straight. It is the first full-length book on Auric.

Roust, associate professor of musicology, said that with the aid of the composer’s widow, he has uncovered previously unpublished Auric music, which is excerpted in the book. And Roust has fleshed out details of Auric’s youth in the French countryside, including an agricultural strike that may have influenced his leftist politics. 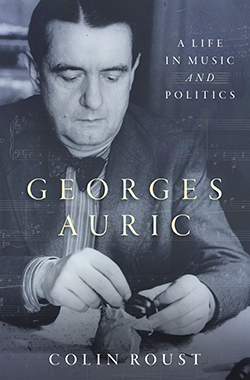 Auric’s rapid ascent from provincial child prodigy to the toast of Paris’ avant-garde during World War I is just one newly detailed chapter in Roust’s eminently readable new book. Auric seems to have lived many lifetimes during his 84 years. He survived both world wars. Politically, he moved from rejecting communism to becoming a fellow traveler and from philosophical anti-fascism to participation in the anti-Nazi French Resistance. Professionally, Auric was recognized as a serious modernist composer while still in his 20s, but he found working in collaboration with others, as on film scores like the influential “A Nous la Liberte,” to be most satisfying. After World War II, he scored dozens of international films, even topping the U.S. pop charts in 1953 with his “Theme from Moulin Rouge.” From there, Auric moved into arts administration, where, as a top official of the Society of Authors, Composers and Editors of Music (SACEM), he expanded opportunities for artists at every turn.

In a recent interview, Roust recalled meeting Michele Auric, the composer’s second wife, in 2017 at her home in Monaco.

“We spent an afternoon going over the manuscripts she pulled out for me,” said Roust, who took some 800 photographs that day. “Two of the songs she pulled out, nobody knew existed, nobody knew he had composed. Five others were known to have been composed, but nobody had ever seen the scores.”

Roust is working with fellow scholar Carl Schmidt, a music professor emeritus at Towson State University, on a critical edition of the new music they have uncovered in recent years.

Roust had been working on his biography of Auric for the past 10 years, using a $6,000 Franklin Research Grant from the American Philosophical Society to fund his Monaco trip.

At a January conference at Princeton University marking the centenary of “Les Six” – the modernist composers that included Poulenc and Darius Milhaud — Roust gave a presentation on Auric, noting his role as “a central member of both Les Six and Paris Dada, becoming an ambassador of sorts between two groups that didn’t get along well. He also served as an intermediary between the three rival factions of Paris Dada as that group exploded apart from 1922 to 1924.”

Somehow, Auric was tight with both Jean Cocteau and André Breton, two of the poles of the Paris art world at that fecund time, as well as Tristan Tzara, Guillaume Apollinaire, Serge Diaghilev, Max Jacob, Georges Braque and many more.

“At the conference, people were genuinely blown away by my discussion of his role in both groups and the way that the two groups intersected through Auric,” Roust said. “Everybody at the conference was well aware of both groups, but nobody had actually lined them up side by side to see the connections.”

From a strictly musical standpoint, Roust says that while he was hailed in the 1920s, Auric has been unjustly forgotten in the intervening century.

“He is the one most representative of the aesthetics that they are credited with,” Roust said.

Les Six advocated for a clean break – Auric liked the words and concepts “clean” and “simple” – from what they considered the stifling German romanticism of Wagner and even the fussy Frenchman Claude Debussy.

Then again, Roust said, Auric was something of a musical chameleon, adapting his music over the decades and to the requirements of his collaborators.

“Some French musicians today know him, and some do not,” Roust said. “Back in the 1950s and '60s, I argue, he was the most important figure in French music.”

In that period, Roust wrote, Auric was not only topping the pop charts with his film scores, but he had moved on from directing the Paris Opera to advocating for artists’ rights – foremost their copyrights — on the international level.

“He leads SACEM through a transition period,” Roust said. “He expands their pension plan. He loosens the rules for membership, which expands the number of people who can be supported. Everything is really focused on helping other musicians.”

Auric is well recalled in the Paris offices of SACEM, where Roust was invited to visit the Salon Georges Auric, a suite of dining rooms for top executives looking over the River Seine and housing some of the association’s most treasured objects.

And now, thanks to Roust’s book, Auric has been much better documented in history for the public at large.

Search options »
Subscribe to KU Today
KU in the news
KSHB — Tue, 06/23/2020
Kansas and Missouri schools offering courses on pandemic
St. Louis Public Radio — Tue, 06/23/2020
COVID-19 treatment developed in St. Louis to begin human trials
RT @UnivOfKansas : Is there a link between how life evolved and our own economic processes? In his new book, a KU professor examines how evo…
«»
Follow us on Twitter »
Why KU
Apply »
One of 34 U.S. public institutions in the prestigious Association of American Universities
44 nationally ranked graduate programs.
—U.S. News & World Report
Top 50 nationwide for size of library collection.
—ALA
5th nationwide for service to veterans —"Best for Vets: Colleges," Military Times