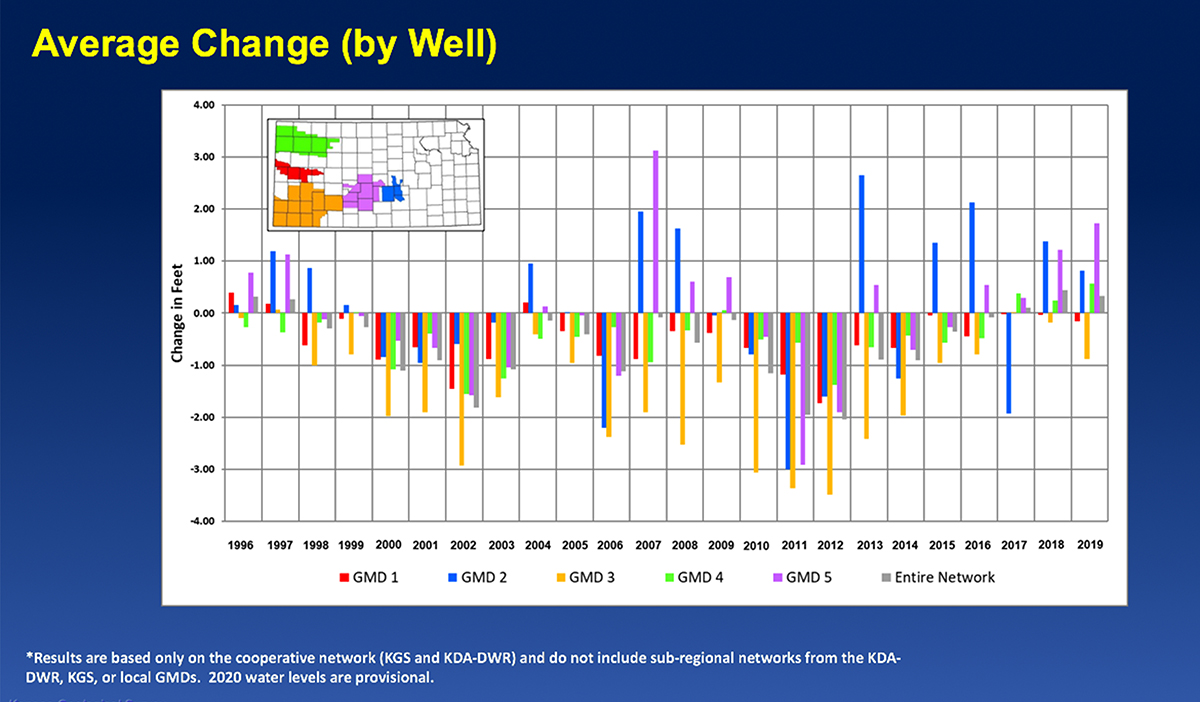 LAWRENCE — Average groundwater levels in central and western Kansas held fairly steady during 2019 as annual precipitation rates were near to above average in much of the state, according to preliminary data compiled by the Kansas Geological Survey.

KGS, based at the University of Kansas, and the Division of Water Resources (DWR) of the Kansas Department of Agriculture measure about 1,400 wells every year to monitor the health of the expansive High Plains aquifer and other aquifers in western and central Kansas. 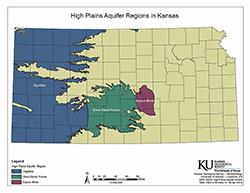 A network of water-bearing rock, the High Plains aquifer extends into eight states and, in Kansas, is composed of three components — the Ogallala aquifer, the Great Bend Prairie aquifer and the Equus Beds. Biggest by far, the Ogallala aquifer underlies most of western Kansas and makes up the bulk of the High Plains aquifer in all eight states. It consists mainly of the Ogallala Formation, a geologic unit that formed from sediment eroded off the uplifting Rocky Mountains.

“The water table in this part of the state is typically much closer to the land surface than in the western third of Kansas,” Wilson said. “That, in combination with the significant increasing precipitation gradient in Kansas as you move west to east, means the aquifers in south-central Kansas tend to naturally respond much more to precipitation events.” 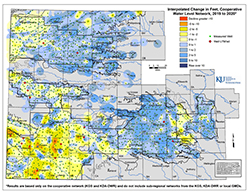 About 90% of the monitored wells are drilled into the High Plains aquifer. The rest draw from the Dakota aquifer and other deeper systems or shallow alluvial aquifers along the Arkansas River and other streams.

The southwest Kansas portion of the Ogallala has suffered the greatest losses since levels started dropping in the 1950s. Between 2010 and 2014 when droughts plagued the region, declines averaged about 3 feet per year. Although declines are still being recorded there, levels have fallen less than a foot each year since 2015.

“The challenge for southwest Kansas is simply it has some of the largest levels of water usage and is in one of the driest portions in the state,” Wilson said. “It represents the largest agricultural producing area in all of Kansas, so it’s of great importance to work towards maintaining the region while trying to stabilize or slow the declines.”

Most of the wells in the network monitored by the KGS and DWR are within the boundaries of the state’s five Groundwater Management Districts (GMDs), which are organized and governed by area landowners and local water users to address water-resource issues.

“Southwest Kansas actually finished the year, precipitation-wise, pretty close to normal,” Wilson said. “That area of Kansas saw a wet end to the summer, and the measured decline rate was half of what it historically has been.”

Wells monitored in GMD 3 are drilled into the Ogallala aquifer except in a few areas where they draw from the deeper Dakota aquifer. The GMD includes all or part of Grant, Haskell, Gray, Finney, Stanton, Ford, Morton, Stevens, Seward, Hamilton, Kearny and Meade counties.

Western Kansas GMD 1 experienced a slight drop of 0.16 feet in 2019. Declines there tend to be small but steady. The only decline over a foot recorded since 1996 was a 1.46 feet drop in 2002, but only three years had gains — all less than half a foot — during that period. GMD 1 includes portions of Wallace, Greeley, Wichita, Scott and Lane counties, where the majority of wells are drilled into the Ogallala aquifer.

Northwest Kansas GMD 4 experienced a small increase for the third year in a row with this year’s increase of 0.57 feet. Since 1996, however, average levels have dropped about 11 feet. The results for GMD 4 exemplify how localized differences in precipitation can lead to varied measurement results within a single region.

“March and June were big precipitation months for northwest Kansas, but they ended the summer on a dry note,” Wilson said. “It was especially apparent in the western side of GMD 4, where we saw small declines.”

Big Bend GMD 5, centered on the Great Bend Prairie aquifer, had the highest average increase in the state at 1.73 feet. There, the increases and decreases tend to even out over time. The average groundwater level in 2019 was just 0.7 feet below the 1996 level, and measurements in some intervening years exceeded both years’ levels. The Great Bend Prairie aquifer underlies Stafford and Pratt counties and parts of Barton, Pawnee, Edwards, Kiowa, Reno and Rice counties.

Equus Beds GMD 2, a major source of water for Wichita, Hutchinson and surrounding towns, saw an increase of 0.81 feet in 2019 following a 1.38-foot increase the year before. As with the Great Bend Prairie aquifer, water levels in the Equus Beds tend to recover more quickly than in western Kansas. GMD 2 covers portions of Reno, Sedgwick, Harvey and McPherson counties.

KGS measures approximately 570 wells in western Kansas each January, and DWR staff from field offices in Stockton, Garden City and Stafford measure about 220, 224 and 360 wells in western and central Kansas, respectively. Most of the wells, spread over 48 counties, are used for irrigation and have been measured for decades with landowners’ permission.

Measurements are taken primarily in January when water levels are least likely to fluctuate due to seasonal irrigation. The measurement results, available on the KGS Water Well Levels website, are provisional and subject to revision based on additional analysis.
The Kansas Geological Survey is a nonregulatory research and service division of the University of Kansas. KGS researchers study and provide information on the state's geologic resources and hazards, including groundwater, oil and natural gas, rocks and minerals, and earthquakes.