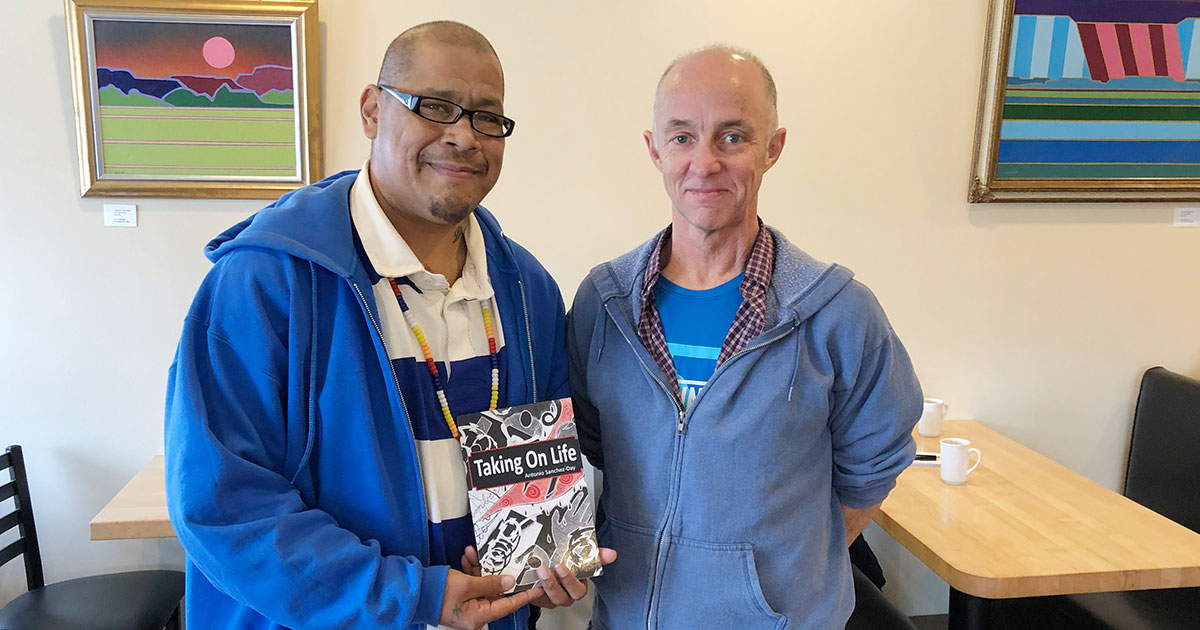 LAWRENCE – Brian Daldorph doesn’t necessarily believe one has to suffer to make great art, but he admits to a particular feeling for those who have and who do. His small press brought Vietnam infantryman-turned-poet John Musgrave to the attention of PBS documentarian Ken Burns, turning him into the voice of a generation.

Now the University of Kansas Department of English lecturer has edited and published “Taking On Life” by Antonio Sanchez-Day (Coal City Press, 2019), the first book of poetry by a single author from the jailhouse writing group Daldorph has led for nearly two decades.

Coal City Press published the collection “Douglas County Blues” by writing group participants in 2010. But Daldorph said Sanchez-Day, a former gang member who grew up in Lawrence, is different than all the other writers.

“There is just something special about Antonio's writing, and everybody knows it when he reads in class,” Daldorph said in a recent interview, sitting next to Sanchez. “Obviously, he's got a really important story to tell. But just the way that he can tell it, the words that he can find, the sincerity of it ...

“I realized there was going to be a body of work there. It wasn't just going to be three or four really good poems. With his commitment to writing and the way the poems kept coming in, I realized that there could be 50-plus poems and it could be a book. One of the things I like in working with authors on books is if there is a theme to it — a sort of organic unit. With the story that Antonio is telling and the way he has organized it — chronologically about his incarceration and then getting out — I began to get an idea in my mind about how we could do this.”

Sanchez-Day had been in and out of jail and state prison for most of his adult life, including a 10-year sentence for aggravated assault, until he was paroled in 2005. He said he finally used his time behind bars to shed his criminal mindset, get in touch with his Native American spiritual heritage, and to write about the mental illness and addictions that led to his incarceration.

Sanchez-Day said Daldorph is an inspirational teacher. He has benefited in particular from the list of writing prompts Daldorph provides for the class every week.

“I always say to the guys the hardest thing in writing is just to have something to begin with,” Daldorph said, “like ‘the best day I ever had’ or something like that. It just gets you thinking about something, and then you can go from there. I say to them, ‘Use something on this list if you just can't think of anything to write. But if you have an idea already, then just go for that.’ And I always emphasize that you can do it any way that works for you. So we have storytellers. We have guys who do more traditional poetry. We have a lot of rappers. We have guys who do fantasy things. Everyone is just like, ‘How am I going to tell my story? How am I going to say the things that are important to me? What form am I going to use to do it?’ And that's the way it's worked for us over the years.”

Sanchez-Day recalled “a battle rap about wizards” in one class.

“The mutual respect out of that class is such that nobody laughs at nobody,” he said. “If anything, they console each other. You see a grown man hand another man a Kleenex and say, ‘Here, man, wipe the tears. It's all good. Let it out.’ It's just amazing.”

It's even more so, Sanchez-Day said, considering the macho code of prisoners.

“That’s exactly what it is,” he said. “They feel safe there. They can let their emotions, their dreams out — be it a sci-fi writer or a rapper or whatever, you know, it's the same place. I like that.”

Now that he’s out and a published author, Sanchez-Day tries to give back and pay it forward, serving as a mentor and friend to the current inmates at the county jail, much like Daldorph. He listens and tries to calm disruptive inmates, then steers them into writing, if possible, as an outlet for their frustrations.

It’s a healing thing, he said.

So he tries to be that friendly ear.

“I say write it down, man. If you don't want it, throw it away, but at least you got it out of your head. You got it off your chest instead of acting out toward the guard. Consider that an alternative. And nine times out of 10, they go with the writing. They'll be like ‘OK, all right.’ Some of the guys come in with packets and packets of stuff they've been working on. They gotta sort through it all: ‘Oh, I have one in here.’”

Daldorph said he’s glad to aid in that process for writers like Musgrave and Sanchez-Day.

“I'm drawn to people who have a story to tell and who have found ways to tell it,” he said. “John knows Antonio, and they understand that, in some ways, they've dealt with similar issues — in very different ways on the surface, perhaps, but they've been right down there and they've found ways of dealing with it and telling their story. And so there is a connection now, I'm sure.”