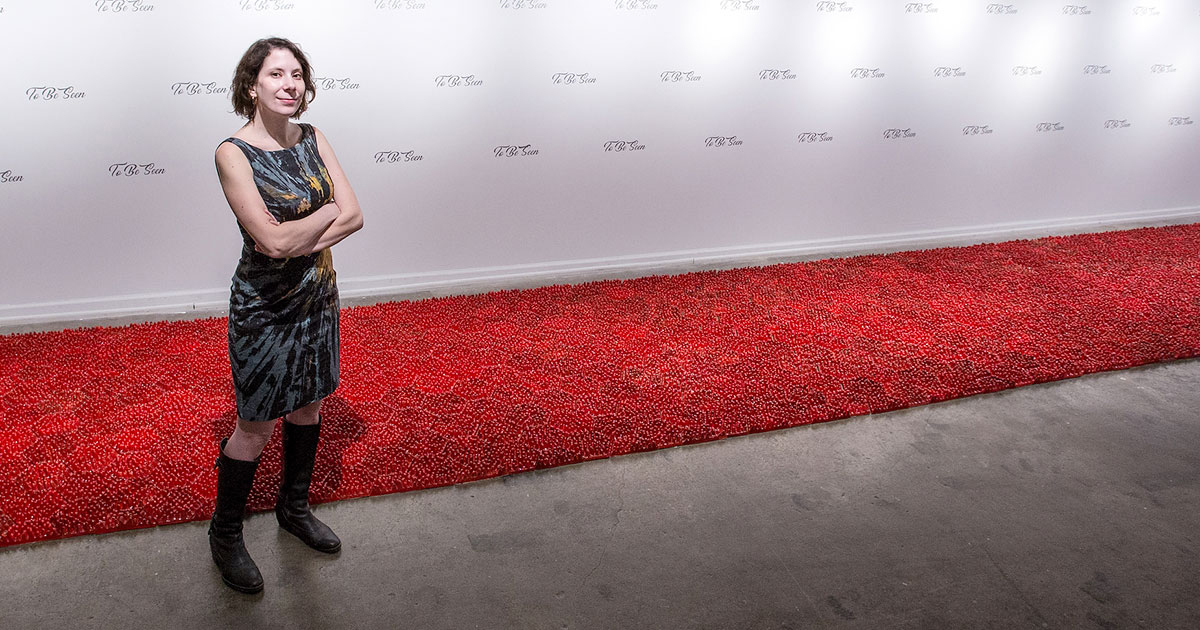 LAWRENCE — “A lot of my recent work is about facades and screens and things we put up to protect ourselves, or to project an image of ourselves,” said Sarah Gross, University of Kansas assistant professor of visual art.

Gross traces this fascination back to her childhood in New York City.

“I grew up in Manhattan,” she said, “commuting to school on the subway with everybody jammed up against each other. So your body was pressed up against strangers, but you couldn’t talk to them or make eye contact. I’m interested in the idea of a social contract in densely populated places, and that you basically cannot acknowledge these awkward encounters. You learn to leave as much personal space and privacy for people as you can.

“As a kid, I was curious about people. But I was unable to ask them questions directly, so it forced me to imagine. I would stare at people by only looking at their shoes and try to figure out where they were going and what they were doing. It revealed a desire I had to know about people but discomfort over the lack of access.”

Likewise, her fascination with ceramics traces back to the same time period, when her parents took her to visit a living-history village, and young Sarah was smitten by the work of the potter. She immediately signed up for a pottery class at her neighborhood YWHA and has been a ceramist ever since. And while she uses a variety of techniques, Gross doesn’t make pots or use the wheel much anymore.

Her latest show, “Trappings,” is up through March 6 in the Caestecker Gallery at Ripon College in Wisconsin. It consists of eight large pieces, including installations or groups of individual pieces, that lay on the floor or hang on the walls.

The central piece is a 36-foot-long carpet of red-glazed ceramic tiles titled “Consumption.”

“It resembles a red carpet when seen from a distance,” Gross said. “But when you get closer, you realize it is not a textile but ceramic tiles – about 700 of them. And when you get even closer, you see the texture on each one created by a little cast of my own finger – the nail, the cuticle. So you are seduced by this iconic object – the red carpet – but then you feel repulsed, or at least uncomfortable, as you get close. Maybe it’s bloody, or you feel the vulnerability of the fragile ceramics and the fingers on them that could be crushed if you step on them.”

Other pieces were inspired, Gross said, by recent university grant-funded research trips to Italy, Spain and Morocco, particularly the intricate patterns of Islamic art in the latter two places.

“Fall in Line” is one example, she said.

“It is about 60 identical ceramic casts of bathtub faucets, and each one has a bright yellow tassel appearing to drip out of the spout,” Gross said.

“Climbers” resembles a door-sized frame with an empty center, Gross said, “which allows the viewer to place themselves inside.”

It was inspired by the notion that people no longer go to museums to contemplate the art there, Gross said, but instead “take selfies in the museum next to a work of art. It’s a kind of social capital to say, ‘I am the kind of person who goes to a museum, who sees or has this collection of experiences you want to disseminate.’”

Whether her surfaces are matte or glossy, Gross wants viewers to look beneath them.

“The show is titled ‘Trappings,’ and it’s talking about outward appearances and how we can project an image that is successful or glamorous,” Gross said, “but this is often a façade. I don’t like to spell out anything for viewers. I am interested in leaving spaces for more broad interpretation.”