LAWRENCE — The 2019 recipients of the Fred Ellsworth Medallion for extraordinary service to the University of Kansas are Dr. Don Brada of Lawrence and Jeff Kennedy of Wichita. The KU Alumni Association will honor them Sept. 5 before the fall meeting of the association’s national board of directors. Since 1975, the medallions have recognized KU volunteers who have continued the tradition of service established by Ellsworth, a 1922 KU graduate who was the association’s chief executive for 39 years, retiring in 1963. 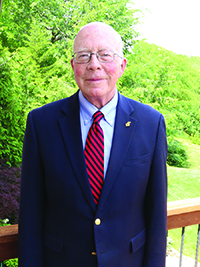 Brada, who grew up in Hutchinson, was the first in his family to attend college. He was involved in student activities, including Beta Theta Pi fraternity and Rock Chalk Revue, and earned a bachelor’s degree from the College of Liberal Arts & Sciences in 1961, followed by a doctorate in medicine in 1965. He has remained devoted to KU for more than 50 years. He currently leads the KU School of Medicine Alumni Association as chair, and he is a member of the Jayhawks for Higher Education Steering Committee. He served on the KU Alumni Association’s national Board of Directors from 2012 to 2017.

“The long list of Don’s volunteer roles for KU doesn’t begin to capture his lifetime of service, both as a student and alumnus,” said Heath Peterson, Alumni Association president. “Don is a thoughtful, dedicated and action-oriented Jayhawk. He takes great pride in KU and the many people who have served as stewards of our great institution.”

Brada began his alumni involvement in Puerto Rico as a young physician in the Air Force, hosting an event for Caribbean Jayhawks with his wife, Kay, who also graduated from the College in 1961. He continued to volunteer when he returned to his hometown and established his practice as a psychiatrist. He assisted the Kansas Honors Program (now the Kansas Honor Scholars Program) and student recruitment, and he urged KU’s participation in the Kansas State Fair in Hutchinson through the years.

The Bradas continued their local alumni network service after they moved to Wichita, receiving the 1990 Mildred Clodfelter Alumni Award for their years as volunteers. Kay Brada received the Fred Ellsworth Medallion in 2015. The Bradas are Alumni Association Life Members and Presidents Club donors.

Don Brada also dedicated much of his career to the School of Medicine-Wichita as a longtime volunteer faculty member; he later became a clinical associate professor and associate dean, retiring in 2016. He strongly advocated for the expansion of the Wichita campus medical curriculum from two years to four, and he continues to volunteer as professor emeritus and a mentor to students.

Since the Bradas’ move to Lawrence in 2010, the breadth of their service has expanded. They both served on the KU Campus Master Plan Steering Committee, and Don Brada has advised and supported the Biodiversity Institute, the Hall Center for the Humanities, the Lied Center, the Williams Education Fund for Kansas Athletics and the Dole Institute of Politics, where he co-founded the Elizabeth Dole Lecture Series.

For KU Endowment, Don Brada is a Chancellors Club Life Member. The Bradas’ philanthropy has benefited numerous areas of KU and the Alumni Association.

“Don is such an integral part of the University; KU simply would not be the same without him,” said Dale Seuferling, KU Endowment president. 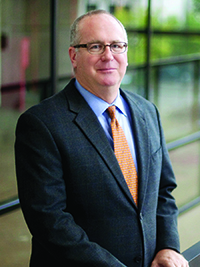 Kennedy, a Pratt native, also is a first-generation college graduate. He followed up his 1981 KU journalism degree (including work for the University Daily Kansan and KJHK radio) with a law degree from Washburn University. He began his KU alumni service in Wichita, where he joined the law firm of Martin, Pringle, Oliver, Wallace & Bauer in 1986. He served as the firm’s managing partner from 2002 to 2014.

A stalwart volunteer for the Wichita Network, Kennedy received the Mildred Clodfelter Alumni Award in 2007 for his local service. He guided the local alumni group as president and served for many years on the board. He also has contributed to the Kansas Honor Scholars Program, recruited prospective students and participates every year in the Jayhawk Roundup, a Wichita tradition since 2003. He and his wife, Patti Gorham, chaired the roundup in 2013.

Kennedy, an Alumni Association Life Member and Presidents Club donor, was elected to the association’s national board of directors in 2008. He chaired the Strategic Communications, Technology and Records Committee as well as the Executive and the Nominating committees during his term, and he led the organization as national alumni chair from 2013 to ’14.

An ardent advocate for state funding of higher education, Kennedy is a longtime member of Jayhawks for Higher Education and, since 2014, he has chaired the JHE Steering Committee, working closely with association staff and the KU Office of Public Affairs to coordinate alumni communications with legislators.

“Jeff is a proven and committed volunteer who cares deeply about all of KU,” Peterson said. “He is passionate about the vital importance of KU and higher education to the future of Kansas, and he has tirelessly and effectively spoken out about the urgent need to restore state support for our universities.”

Kennedy also helped lead the effort to expand the School of Medicine in Wichita to a four-year curriculum as chair of the first 4-Wichita Advancement Board, and he continues to serve on the board’s executive committee.

For KU Endowment, Kennedy is a Chancellors Club and Elizabeth Watkins Society member, supporting many areas of KU, including the Alumni Association, Kansas Athletics and the Spencer Museum of Art.

“Jeff has volunteered for KU for more than 30 years,” Seuferling said. “His leadership helped move the School of Medicine-Wichita forward through his effective advocacy and vital connections in the local business community.”

Since 1975, 158 KU alumni and friends have received the Fred Ellsworth Medallion.