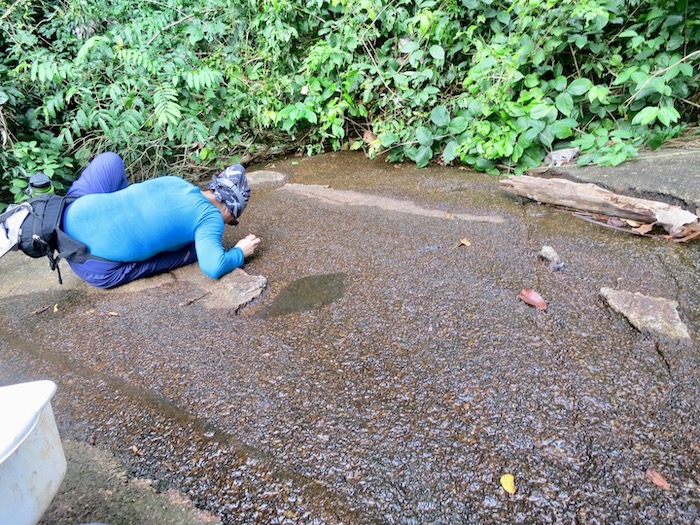 LAWRENCE — Researchers from the University of Kansas have described three genera and 17 new species of water scavenger beetles from the Guiana and Brazilian Shield regions of South America, areas seen as treasure houses of biodiversity. The beetles from the countries of French Guiana, Suriname, Brazil, Guyana and Venezuela were discovered through fieldwork and by combing through entomological collections at the Smithsonian Institution and KU.

The beetles are described in a new paper in ZooKeys, a peer-reviewed journal. 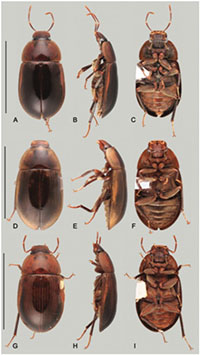 Lead author Jennifer Girón, a KU doctoral student in ecology & evolutionary biology and the Division of Entomology at KU’s Biodiversity Institute, said the new species hint at vast biodiversity left to be described in regions where resource-extraction operations today are destroying huge swaths of natural habitat.

“The regions we've been working on, like Venezuela and Brazil, are being degraded by logging and mining,” she said. “Eventually, they’re going to be destroyed, and whatever lives there is not going to be able to survive. At this point, we don't even know what’s there — there are so many different kinds of habitats and so many different resources. The more we go there, and the more we keep finding new species, the more we realize that we know next to nothing about what’s there.”

According to Girón and co-author Andrew Short, associate professor of ecology & evolutionary biology at KU, fieldwork and taxonomic work on Acidocerinae (a subfamily of the family Hydrophilidae of aquatic beetles) during the past 20 years have exposed “an eye-opening diversity of lineages and forms resulting in the description of seven of the 11 presently recorded genera since 1999.”

The KU researchers said the three new genera they’ve now added to Acidocerinae possibly have remained obscure until now because many of the species inhabit seepages — areas where groundwater rises to the surface through mud or flow over rocks near rivers or streams.

Girón and Short discovered some of the new species during a field trip to Suriname. 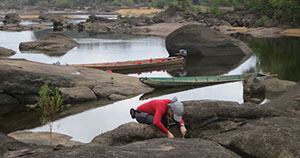 “I have only been to one of the expeditions there,” Girón said. “Before that, I had no experience collecting aquatics. But Andrew (Short) has been to those places many times. It’s very remote, in the heart of the jungle. We went four hours in a bus and then four more hours in a boat up the river. There is a field station for researchers to go and stay for a few days there. We looked for the beetles along the river, forest streams and also in seepages.”

During their fieldwork, Girón and Short, along with a group of KU students, sought the seepages that were rich hunting grounds for acidocerine aquatic beetles. 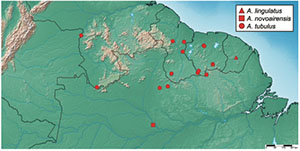 “If you’re along a big river, you're not as likely to find them,” Girón said. “You have to find places where there’s a thin layer of running water or small pools on rocks. They’re more common around places with exposed rock, like a rock outcrop or a cascade. These habitats have been traditionally overlooked because when you think of collecting aquatic beetles or aquatic insects in general, you think of rivers or streams or ponds or things like that — you usually don't think about seepages as places where you would find beetles. So usually you don't go there. It’s not that these aquatic beetles are especially rare or hard to find. It's more like people usually don’t collect in these habitats.”

Girón said the descriptions of the new aquatic beetles also underscore the usefulness of museum collections to ongoing scientific research in biodiversity.

“It's important to highlight the value of collections,” she said. “Without specimens housed in collections, it would be impossible to do this kind of work. Nowadays, there has been some controversy about whether it is necessary to collect specimens and deposit them in collections in order to describe new species. Every person that has ever worked with collections will say, ‘Yes, we definitely need to maintain specimens accessible in collections.’ But there are recent publications where authors essentially just add a picture of one individual to their description without actual specimens deposited in collections, and that can be enough for them to publish a description. The problem with that is there would be no reference specimens for detailed comparisons in the future. For people who do taxonomic work and need to compare many specimens to define the limits of different species, one photo is not going to be enough.”

To differentiate and classify the new species, Girón and Short focused on molecular data as well as a close examination of morphology, or the bodies of the aquatic beetles.

“This particular paper is part of a bigger research effort that aims to explain how these beetles have shifted habitats across the history of the group,” Girón said. “It seems like habitat has caused some morphological differences. Many aquatic beetles that live in the same habitats appear very similar to each other — but they’re not necessarily closely related. We’ve been using molecular techniques to figure out relationships among species and genera in the group.”

Girón, who grew up in Colombia and earned her master’s degree in Puerto Rico, said she hoped to graduate with her KU doctorate in the coming academic year. After that, she will continue her appointments as research associate and acting collections manager at the Natural Science Research Laboratory of the Museum of Texas Tech University.