UPDATE: In August 2020, "Indigenous Food Sovereignty in the United States" was awarded the Daniel F. Austin Award for an edited volume by the Society for Economic Botany.

UPDATE: In December 2019, “Indigenous Food Sovereignty in the United States” won named No. 1 in the univeristy press category by Gourmand International. The book has also been named on best-of lists by High Country News, Literary Hub and EcoWatch.

These are familiar concepts to Americans who are hoping to improve their eating habits.

But the term that indigenous food activists are also adopting is “food sovereignty,” which refers to healthy and culturally appropriate food generated by a community that oversees the entire process, from production to trade to sustainability. 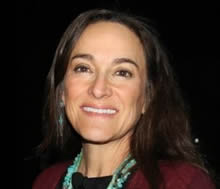 For Devon Mihesuah, a member of the Choctaw Nation, food sovereignty has taken on an even more personal meaning.

“Tribes are not sovereign and probably never will be. But we still like this term because that is our great goal: to have complete control over production of our food, our environment and our politics,” she said.

Mihesuah, the Cora Lee Beers Price Teaching Professor in International Cultural Understanding at the University of Kansas, has put together a new book titled “Indigenous Food Sovereignty in the United States: Restoring Cultural Knowledge, Protecting Environments, and Regaining Health” (University of Oklahoma Press, 2019). She describes it as “the first comprehensive volume to address the social, political, economic, religious and environmental concerns associated with indigenous food and health.” 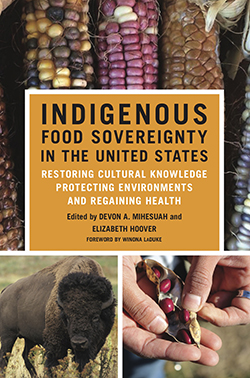 “All of the contributors are food and environmental activists, and most of them are not in academia,” she said of the book, which incorporates a multitude of tribal viewpoints from across the country, including Alaska and Hawaii.

Mihesuah hopes the 390-page effort will illuminate and clarify a number of issues involving indigenous food sovereignty, not the least of which is specifying what is actual indigenous food.

“The topic that goes through many of these essays is what does traditionalism mean? What is traditional food?” she said. “And for a lot of native people, that’s fry bread. So we talked about the meaning of true, traditional, pre-contact food and how that is a connection to one’s culture.”

She admits it’s easier to explain what pre-contact food isn’t than what it is.

While many assume native foods to be things such as okra, black-eyed peas and watermelon, those are all actually African imports that accompanied the slave trade. Pawpaws, persimmons and black walnuts that can be foraged in Kansas represent some of the actual fare.

“The importance of protecting our natural resources was one of the big themes of this book. And that includes the plants we forage for,” she said.

But she also notes “indigenous” should not be confused with vegan or vegetarian.

“Gardening and farming are very important, but not every tribe has an agricultural tradition,” she said. “Comanches, for example — my husband’s tribe — did not farm. They don’t have memories of seeds. They’re not going to thunder across the plains after bison anymore. So what should they do? What foods do they return to?”

Mihesuah herself has always been health-conscious, having grown up consuming these foods.

“In fact, the first novel I wrote (2000’s “Roads of My Relations”) is based on family stories where the garden was meaningful, even before we (the Choctaw) were removed in the 1830s. So I have kept this same garden going, trying to emulate the one my grandparents had in Muskogee, Oklahoma. And now my kids have learned how,” she said.

Part of the challenge has been getting her own community to adopt such practices, especially following decades of poor eating habits.

“I’ve become a real activist against fry bread, which makes a lot of people angry,” she said. “To me, that’s a symbol of everything that is wrong with the colonized diet tribes have adopted. Obesity, high blood pressure and diabetes have taken over. It’s like a tidal wave. And if you decide you’re going to eat fry bread every day, that’s really symbolic of the problem.”

Mihesuah earned her doctorate in American history from Texas Christian University. She’s written 19 books, including five fictional novels, and served as editor of the American Indian Quarterly for nine years.

Currently, she is also revising and expanding her first cuisine-related book, “Recovering Our Ancestors’ Gardens: Indigenous Recipes and Guide to Diet and Fitness.” This won a special jury award at the Gourmand World Cookbook Awards in 2005.

“We want young native people and older native people to really try to revisit their traditional ways of eating and their food ways, and to engage with those within their tribe who are knowledgeable about it,” Mihesuah said.