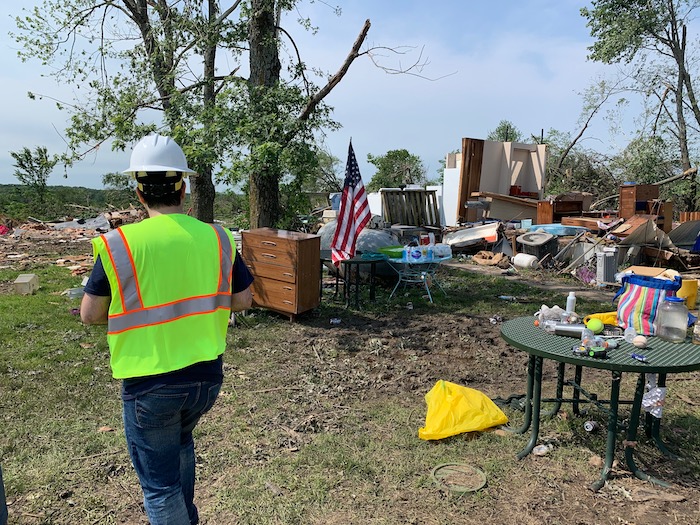 The tornado that developed in southwestern Douglas County on May 28 strengthened into an EF4 with peak winds of 170 mph as it skirted the city of Lawrence — home of the University of Kansas. Next, the rain-shrouded twister plowed northeast, wreaking havoc through southern Leavenworth County, notably in the community of Linwood.

Within three days, a team of structural engineers organized at KU and funded by the National Science Foundation’s Structural Extreme Events Reconnaissance Network (StEER) conducted a door-to-door damage assessment that gives new insight into the tornado’s destructiveness and could help inform future building codes in Kansas and beyond.

Their preliminary report has just been published online. 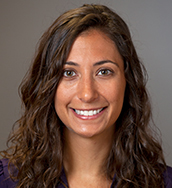 “They reached out to me and asked if I’d be willing to do what they call their fast-response structural engineering assessment,” said Elaina Sutley, assistant professor of civil, environmental & architectural engineering at KU. “I said ‘yes’ because I really wanted to do this work for my community. I sent out an email to the structural engineering faculty in my department and asked, ‘Are you interested, around and available — and what about your students?’ We assembled a group of 16, including a colleague at the University of Missouri-Kansas City and an aerospace engineering professor at KU, and designed this study. The tornado was Tuesday evening, and we went out on Friday. We worked for around 12 hours and split into seven different teams out in the field — four door-to-door and three drone teams — and completed 271 door-to-door damage assessments.”

Sutley, who previously has researched community responses to disasters like Hurricane Michael, said the extent of damage along the twister’s path in northeastern Kansas was easier to define than more widespread flood and hurricane damage she’d documented in places like North Carolina and Florida.

“Similar to other wind events, we saw exploded mobile homes,” she said. “That’s pretty common and devastates me that we don’t build and provide safer affordable housing. 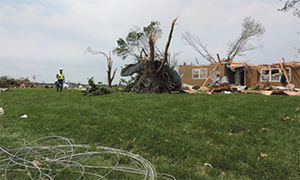 “The debris missiles are always really interesting and strange with tornadoes,” she said. “For example, you see structural lumber stabbed into the ground and into walls. If we get the chance to talk with an occupant, they can often identify where the debris came from, including from a neighbor’s property from reasonable distances away. One person had a 20-pound dumbbell dislodged into another room, around walls, which is really interesting when you think about the aerodynamics of a 20-pound hand weight. There were lots of debris missiles like these and including cars flipped and moved significantly, a mattress wrapped around a tree. We observed many sucked-in garage doors. I saw the barns or the garage structures that people had on their properties — they’re not built to withstand much — but basically all of those along the tornado’s path had completely collapsed, which means these structures then collapsed onto people’s vehicles and often became debris missiles as the tornado continued to pass by.”

To avoid bias, the team conducted damage assessment on every third residence in dense neighborhoods regardless of the amount of destruction and surveyed every structure in the less dense areas along the tornado’s path. 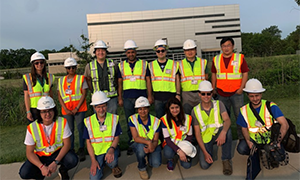 “You don’t want to say, ‘Oh, this was damaged, let me survey it. That one’s not — let me skip it,’” Sutley said. “We want unbiased sampling in clusters because the clusters allow you to see a true representation of what happened as opposed to spot-checking or biasing the data. When we approached a sample, we first knocked on the door to ask permission to survey and take pictures of the outside of the home. No one turned us down, but had they, we would have respected their wishes and moved to the next structure. There is so much movement immediately after disasters that people can definitely feel that their privacy has been invaded, and we never want to be a source for that.”

The team found people along the way who showed resilience in the face of loss.

“People were in surprisingly good spirits,” Sutley said. “When I’ve surveyed damaged structures after flood and hurricane disasters, the people I’ve spoken with are emotional and devastated. When I went in after Hurricane Michael, people were having a hard time forming complete sentences; they were still trying to understand and interpret what had happened to them. Going in three days after the tornado is the quickest I’ve ever gone into the field. In the past, it has been several weeks later. I don’t know if the timing component could be a difference, but my instinct says it isn’t in this case.”

The KU researcher pointed out that homeowner’s insurance covers wind damage from a tornado but does not cover water damage from flooding, which perhaps is another reason her team encountered optimism along the Kansas tornado’s track.

“We observed damage that was due to how a lot of the houses were constructed,” Sutley said. “My specialty in structural engineering is wood-frame design. That’s what places me really well for these types of residential damage assessments. In structural engineering, the fundamental principle is designing for a continuous-load path. That means a load on the roof gets transferred down into the foundation by passing through the walls. All buildings are designed with this gravity load path.  What we’re not seeing in practice in residential buildings, especially with older homes, is the path to transfer lateral and uplift loads. In Kansas, it’s not legally articulated in the building codes that this is required, although it is mandated or heavily encouraged and advertised in places like Tulsa, Oklahoma, and in Florida. Tornadoes present large uplift and lateral forces, so buildings that lack proper connections between the roof and walls, or lack wall sheathing, or lack anchorage result in catastrophic failures when exposed to tornadoes. I saw walls glued to the concrete foundation. You don’t have to be a structural engineer to know that walls only connected to the foundation through an adhesive are not going to do much when the wind blows.”

Despite the tornado causing no deaths, and optimism among many affected by the storm, Sutley said surveying damage up close still takes an emotional toll on team members, and she noted how tough it can be on emergency relief workers.

“It’s always surreal to be on the ground after a disaster — it is a forever frozen moment in your memory when you’re standing outside and everything you see around you is complete destruction, and especially when you understand the societal implications of what you’re witnessing,” she said. “I told my team at the end of the day to make sure that they take some time to reflect and cope with what they witnessed and experienced all day. Because it can really charge your emotions, and especially when it’s your community. I had a personal experience that largely motivated me to go into disaster research in grad school, when an EF4 tornado ripped through the middle of my home community in Tuscaloosa, Alabama. It is when I realized for the first time that we structural engineers didn’t know and weren’t doing anything about tornadoes. I was devastated and completely dumbfounded because I had been taking shelter my whole life from tornadoes and one had just destroyed Tuscaloosa; how could this be a load we don’t even consider?”

Sutley herself was in Seoul, Korea, when the recent tornado blew through Lawrence. When asked about what it was like to learn of the tornado while being so far away, she had to take a deep breath before responding.

“I learned that there was a tornado coming through when a friend living in Kansas City who I know from Tuscaloosa text-messaged me to take cover,” she said. “I was actually really upset and trying to fight tears back while a close colleague was giving a really special keynote lecture. I had my iPhone headphones in listening to news reports saying that a very large tornado was headed to Lawrence. At the time, that was the only information available on the internet. I immediately tried to get in touch with my husband and many local friends to see if they were OK. It was probably only seconds before I heard back, but it was long enough for me to remember the horrible feelings of the unknown and potential dangers that I felt and witnessed back in 2011. Thankfully, information started flooding my phone and the internet, and I learned that my family, friends, students and colleagues were OK.”