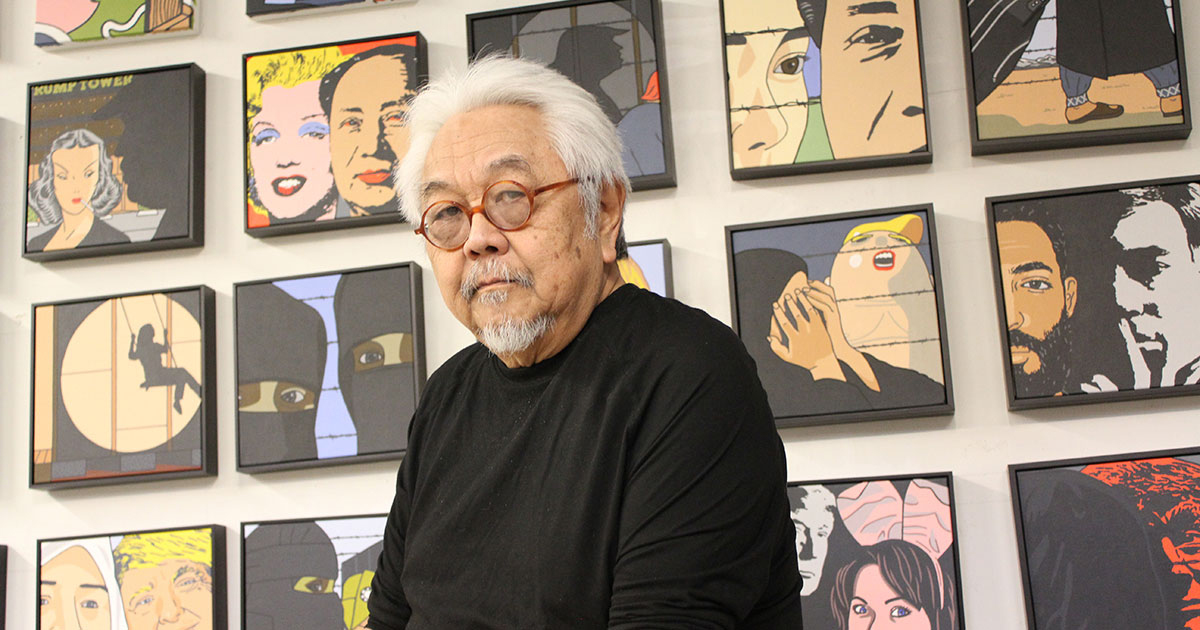 LAWRENCE – On the cusp of 80, Roger Shimomura is taking Dylan Thomas to heart, raging against the dying of the light with "American Muse," one of his largest and most politically pointed shows ever. The show opens April 5 at Sherry Leedy Contemporary Art in Kansas City, Missouri.

After nearly 150 solo shows, this event is the last one on his calendar, he said. And while his Seattle dealer could announce something any day, the University of Kansas professor emeritus has stopped accepting the visiting-artist gigs he did regularly during his 35 years (1969-2004) teaching at KU, and he has mostly stopped accepting interview requests.

He has donated his collection of artifacts relating to the mass incarceration of Japanese-Americans during World War II — a formative event he survived as a child – to the Smithsonian National Museum of American History. That includes 56 years’ worth of his immigrant grandmother’s diaries, which provided raw material for much of Shimomura’s previous pop-inspired, 2-D art work as well as his performance art.

What Shimomura has not stopped doing is painting and creating. Freed from the need to teach, to sell his work, to fit into some conceptual framework – self-imposed or otherwise – Shimomura feels free to follow his muse.

At the time of this interview, the Leedy show-to-be was partly stacked up on the floor and partly hung en masse on one wall of his studio space.

Some of the work has been shown elsewhere in the past few years, Shimomura said. But more than 50 1-foot-square paintings that are specifically a response to the Trump administration’s treatment of immigrants and racial and religious minorities will be seen for the first time.

Shimomura said the KC show will be divided into three parts.

The first is 50-plus examples from a series he calls the “Great American Muse,” after Tom Wesselmann’s “Great American Nude” series. As in the work of pop artists such as Wesselmann and Andy Warhol, consumer-product brand names figure here prominently.

The second is a series of about 40 paintings titled “Minidoka and Beyond,” which were directly inspired by his experiences as a child imprisoned in that southern Idaho concentration camp. He has returned to this theme again and again over the past 50 years.

The third part of the show, Shimomura said, is a series of small paintings inspired by then-newly inaugurated President Donald Trump’s travel ban on people from a group of mostly Muslim nations. He’s tentatively calling it “Muslims and More.”

“It started with the idea that what was happening to Muslims is similar to what happened to Japanese-Americans,” Shimomura said. “There was talk about, well, we could put them in camps, and, as they prove themselves loyal, we will let them out. That idea sent shock waves through the whole Japanese American community.

“And so that's when I started doing these paintings that treated Muslim people a lot like Japanese-Americans and putting them behind barbed wire, since Trump said that he would probably be willing to do the same thing to Muslims they did to the Japanese-Americans.”

That, Shimomura said, led him to make “more specific paintings of Trump.”

But whereas Shimomura’s paintings are colorful and humorous – even cartoon-inspired – he’s no cartoonist. He said he tried hard not to make Trump a caricature.

“Paintings like that become very short-lived,” the artist said. “They're consumed and just sort of spit out, and it's over. ... It's a lesson in subtlety. You step back in a far more conservative kind of way, and you end up with some ambiguity to the work; to the images, so they're not quite in your face.”

The humor in his work serves to soften the serious issues he raises, Shimomura said.

“When people laugh, they open their mouth,” he said, “and that's when you can shove things in.”

The show opens with a public reception from 7 to 9 p.m. on First Friday, April 5, and runs through May 25. The gallery is open 11 a.m. to 5 p.m. Tuesday through Saturday and by appointment.