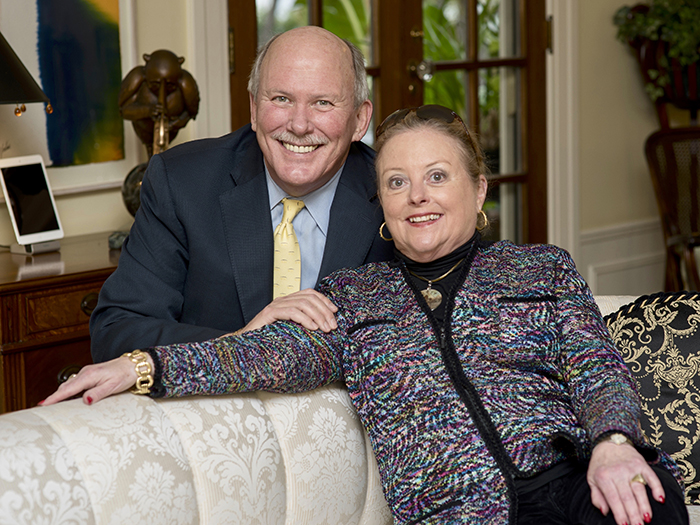 LAWRENCE — A gift of $3.5 million from University of Kansas alumnus Craig Martin and his wife, Diane, of Pasadena, California, establishes a center for construction safety at the School of Engineering.

The Craig & Diane Martin National Center for Construction Safety, based in the civil engineering department, advances safety management, research and development with the goal of directly improving safety outcomes and productivity in the construction industry.

Craig Martin retired from Jacobs Engineering Group in 2015, where he worked for nearly a decade as its CEO. Jacobs is a major engineering, architecture and construction firm now based in Dallas. A civil engineer by education, Martin has devoted his life to the construction and engineering industry. His passion for safety inspired his and Diane’s decision to create the center.

“Craig believes in keeping people safe at work and at home,” Diane Martin said, describing his tendency to stop on neighborhood streets and talk to people about their safety. “We are very happy to find a way to put this passion into action.”

“The idea of the center came as we began thinking about what was important to us,” Craig Martin said. “We want to be involved in creating and sustaining something that truly makes a difference.”

Martin said the two key elements of the center are that it takes a multidisciplinary approach — incorporating not just engineering but also areas of study such as psychology and sociology — and that it focuses on “reduction to practice,” which is what can be practically accomplished in the field or office.

The center will focus on several areas of safety, including:

“I would like to thank the Martins for their generosity and ingenuity in creating a center that will put KU in the national spotlight for innovation in construction safety leadership,” said KU Chancellor Douglas A. Girod.

Martin was born in Dodge City and earned a bachelor of science degree in civil engineering from KU in 1972; he went on to earn an MBA at the University of Denver 10 years later. It was while working on a construction site near Topeka that he met Diane, a native of Salina, who earned both a bachelor’s degree in political science and a law degree at Washburn University.

Interim Dean of Engineering Arvin Agah thanked the Martins for their generosity and vision for KU’s future.

“Craig and Diane have been steadfast supporters of the university and School of Engineering over the years,” Agah said. “We are grateful for their continued commitment. This gift positions KU to become the leader in construction safety ideas and innovation.”

David Darwin, the Deane E. Ackers Distinguished Professor and Chair of Civil, Environmental & Architectural Engineering at KU, said, “The center provides new opportunities to explore best practices for safety in design and construction, a critical area. I am excited about the cross-disciplinary approach of the center and the department’s role in leading the effort.”