LAWRENCE — Stay-at-home dads might find their spirit animal in the smooth guardian frog of Borneo. A new pair of research papers authored by an investigator at the University of Kansas shows the male of the smooth guardian frog species (Limnonectes palavanensis) is a kind of amphibian “Mr. Mom” — an exemplar of male parental care in the animal kingdom. 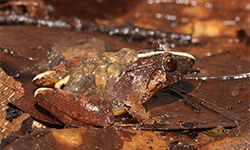 “Sex-role reversal is basically when a male takes the role that you usually see with females in other species,” said Johana Goyes Vallejos, a postdoctoral research associate with the Herpetology Division at KU’s Biodiversity Institute, who led both studies. “The male provides care for the offspring. The females do the displaying part — like a peacock that has beautiful feathers — the female has those ornaments or behaviors you usually see with males.”

The papers reflect three years’ worth of fieldwork in Borneo, a vast island in the southwestern Pacific Ocean split among the nations of Malaysia, Brunei and Indonesia. Goyes Vallejos observed the frogs both in the wild and in outdoor enclosures at a field station. 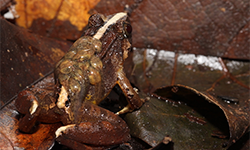 In one of the papers, published in the Journal of Natural History, Goyes Vallejos offers new details about the prolonged parental duties of the male smooth guardian frog, behavior that had been studied very little until now.

“In frogs, male parenting is more common,” said Goyes Vallejos. “But in other frog species, males take care of eggs and offspring, but they continue to call to attract other females — they aren’t missing opportunities to mate with females just because they have a clutch of eggs. So, sometimes they have two or three clutches of eggs from different females. But in the case of the smooth guardian frog, they only take care of one clutch and they don’t call at that time — they aren’t interested in attracting other females; they’re very faithful fathers. That’s unusual. Clearly, other frog species can do it, so why don’t they? There’s some reversal in the sex roles where the father becomes a very devoted parent while the female can go on to mate multiple times.” 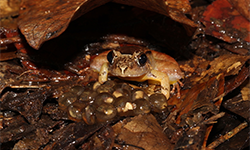 According to the KU researcher, the smooth guardian frogs are primarily terrestrial, living in the leaf litter on the floor of the tropical rainforest where they’re most active at night, feeding on insects and other arthropods.

“Males produce advertisement calls to attract females to their location,” said Goyes Vallejos. “When females approach, if they like each other, they have a mating ritual. The female lays 15 to 20 eggs on the ground, then the male is the one that stays with the clutch of eggs and the female takes off — possibly to mate with other males. The males stay with the eggs for 11 days on average, and when they hatch the tadpoles scramble on the back of the male. The male takes them throughout the forest to find small pools to be deposited where they can finish their development.”

In the second paper, published in the journal Ethology, Goyes Vallejos wanted to know more about the kinds of strategies males used for depositing the tadpoles in these pools.

“They can be small puddles left by the rain, a fallen log or a tree stump filled with water — really any small body of water,” she said. “We don’t know for sure, but it generally takes between three to four weeks for tadpoles to become frogs.”

For the first half of the study, Goyes Vallejos observed male frogs in the study area as they searched for naturally available pools where their piggybacking tadpoles could develop into fully fledged frogs.

“I found they were very sparse and they couldn’t find places where they could deposit tadpoles,” she said. “This told me these tadpole pools are very rare and the frogs had to travel a long time. They can’t put them anywhere — it needs to have a lot of food; they feed on the little algae that grow on the fallen leaves in the bottom of the water. And it must be permanent enough so the tadpoles have time to develop. These places are scarce. The males are on a mission — they need to find these pools.”

For the second half of the study, the KU researcher created artificial pools in the forest floor that each was a few inches deep and about the diameter of a dinner plate — perfect nurseries for tadpoles. She wanted to see if, given identical pools, other factors might influence the male guardian frogs’ pool-selection process.

“I measured different variables like how much leaf litter was around, how steep was the terrain, and how much coverage from the forest did it have?” said Goyes Vallejos. “I found it was more probable for a male to deposit his tadpoles on flatter rather than steep terrain. My explanation was that possibly males were looking for places that would hold water — you wouldn’t go places where pools empty out because the terrain is too steep and the tadpoles would be washed out under heavy rains, which are very common in the rainforest. Instead, they looked for places permanent enough for tadpoles to develop to completion.”

Using the artificial pools for choice experiments, the KU researcher sought to find out if the presence of other organisms —predators or competitors — affected frogs’ selection of tadpole pools.

“In most of the literature on frogs, you find that parents avoid competitors, and especially predators, at all costs, so that was my prediction,” Goyes Vallejos said. “In my case, the predator was dragonfly larvae — quintessential tadpole predators. The experiment consisted of having two artificial pools, one next to the other. One had predators, and one didn’t. I looked to see if the male would avoid predators, and I expected males would deposit tadpoles in the empty pools without the predator. I was very surprised when I found they actually split the number of tadpoles between two pools. Say he had 14 tadpoles — then he would put seven in one and seven in the other. That was the most common strategy. In 12 deposition events I recorded, five out of 12 times they deposited the tadpoles split the number of tadpoles in both pools.”

In the other experiment, Goyes Vallejos wanted to see if tadpoles of the same species already in one pool would affect deposition of new tadpoles.

“Maybe they’d see them as competitors or maybe see them as a sign they were safe there,” she said. “In this case as well, the males split the tadpoles in the two pools — it didn’t matter if there were tadpoles of same species or predators present in the pool— they split them between the pools.

Goyes Vallejos said the experiments showed “the splitting behavior is the same as not putting all your tadpoles in one basket.”

“If these pools aren’t very common, and if you find them, you need to take advantage of this resource,” she said. “Presumably, the males divide the number of tadpoles in different pools and hope that at least one pool will be permanent enough for the tadpoles to develop into frogs. It doesn’t matter if a predator is in there — try to avoid it. It’s better to have someplace for your tadpoles than no place at all. Tadpoles don’t move a lot, so maybe they’re relying on that behavior not to be affected by predators. The alternative is the males weren’t aware there was a predator, but typically, frogs are good at detecting predators in the water. Those are a matter for further study, but in general, they’re trying to find as many places as possible to deposit tadpoles.”

Goyes Vallejos, who grew up in the mountains of southwest Colombia, became interested in frog research after earning her undergraduate degree in her home country when she had an opportunity to study frog signaling at the Smithsonian Tropical Research Institute in Panama.

“I fell in love with them,” she said. “I was blown away by the diversity of frogs, how they vocalize and all the different strategies they have to find each other and mate. One thing led to another, I moved to Connecticut to earn my Ph.D. at the University of Connecticut, and during that time I spent several years in the jungles of Borneo looking for frogs.”