LAWRENCE — Artists Ulrick Jean-Pierre, Adrian Stimson and Tina Takemoto will visit the Spencer Museum of Art Oct. 17–18 to give public performances and talks examining aspects of Haitian, Native American and queer social histories. All three artists are visiting as part of a Social Histories Series presented by the Spencer’s Integrated Arts Research Initiative (IARI). This series investigates how art can uncover the social histories of everyday people to provoke greater understanding of the less obvious figures who have played key roles in history. 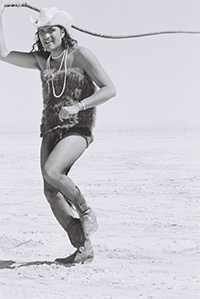 Many of the museum’s current exhibitions also explore the concept of social histories. Since August, IARI has displayed “Passage” by Mohau Modisakeng — a three-channel video installation that meditates on slavery’s dismemberment of African identity and its erasure of personal histories. “Larry Schwarm: Kansas Farmers,” an exhibition of 50 photographs, documents the unique realities of farm life in Kansas. Social histories are at the forefront of “The Ties that Bind: Haiti, the United States, and the Art of Ulrick Jean-Pierre in Comparative Perspective,” an exhibition that gives prominence to events and figures from Haitian history that have often been overlooked.

“Social histories reveal the stories of people who have often been misrepresented in or left out of historical accounts,” said Joey Orr, the Spencer Museum’s Andrew W. Mellon curator for research. “Through the Spencer’s exhibitions and visits by Ulrick Jean-Pierre, Adrian Stimson and Tina Takemoto, we seek to understand how art practices can be methods of doing the work of social history alongside historians and scholars from various fields.”

Jean-Pierre, a Haitian painter based in New Orleans, created this year’s KU Common Work of Art, which is included in “The Ties that Bind.” Jean-Pierre will give a talk about artmaking as social history on Wednesday, Oct. 17, at the Spencer Museum.

“For me, creating a historical painting consists of months of extensive research prior to the physical creative process,” Jean-Pierre said. “I have to feel a sense of unity with my subject matter before I approach my canvas to start the act of creation.”

Stimson, a member of the Siksika (Blackfoot) Nation, is an interdisciplinary artist whose work addresses identity construction, specifically the hybridization of the Indian, the cowboy, the shaman and Two Spirit being. Stimson will give a performance that addresses the history of residential schools on Wednesday, Oct. 17, at Haskell Indian Nations University.

“Haskell welcomes Adrian Stimson and Buffalo Boy to our land and our stage,” said Carrie Cornelius, supervisory librarian at Haskell. “Canada and the United States slaughtered the buffalo as an act of genocide to the Blackfoot people and other Plains tribes. Adrian Stimson’s performance art and personalities summon these massive spirits.”

Takemoto, professor of visual culture at California College of the Arts, explores the hidden dimensions of same-sex intimacy and queer sexuality for Japanese Americans incarcerated by the U.S. government during World War II. Takemoto will deliver a performative lecture and present an experimental video work about how artists and scholars approach queer social history Thursday, Oct. 18, at the Spencer Museum.

In addition to their separate programs, Jean-Pierre, Stimson and Takemoto will all participate in a public roundtable discussion about how different disciplines contribute to the work of social history Thursday, Oct. 18, at the Spencer Museum.

All events are free and open to the public. Visitors can further explore social histories throughout the Spencer Museum’s galleries with a self-guided tour on the museum’s app, available for free download on Android and iOS devices.

New Orleans-based Haitian artist Ulrick Jean-Pierre is joined by co-curators of “The Ties that Bind,” Cassandra Mesick Braun and Cécile Accilien, for a discussion that addresses artmaking as social history.

Interdisciplinary artist Adrian Stimson gives a performance addressing the history of residential schools through his performance persona Buffalo Boy. The auditorium at Haskell is located on E. Indian Avenue between Haskell Memorial Stadium and Hiawatha Hall. Free parking is available nearby at the Haskell Cultural Center and Museum.

Visual cultural professor and artist Tina Takemoto delivers a performative lecture and presents experimental video works about how artists and scholars approach queer social histories through the lens of the wartime incarceration of Japanese Americans.

Discussion: The Work of Social History

This is a public roundtable discussion of how different disciplines contribute to the work of social history. Participants include IARI visiting artists and scholars Ulrick Jean-Pierre, Adrian Stimson and Tina Takemoto, as well as Spencer Museum staff and KU scholars.