LAWRENCE – The new, all-digital Spanish language-learning program Contraseña (Password) co-created by Amy Rossomondo, University of Kansas associate professor of Spanish & Portuguese, is deeply informed by research in applied linguistics and the ethos of the open-access movement.

And while it isn’t free, Contraseña is consciously low-cost. Students will pay no more than $75 per semester. 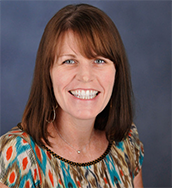 What’s more, with the innovative methods employed, Rossomondo says, Contraseña users will achieve twice the learning and, not coincidentally, have twice the fun for half the cost of a traditional textbook.

That value proposition, along with first-mover advantage, has Rossomondo, startup publisher LingroLearning and the students who are using Contraseña for the first time this semester in several major U.S. universities, including KU, Marquette, Cincinnati and Western Kentucky, excited.

Oh, and did we mention there are no tests?

Those are just some of the innovative features of the program that Rossomondo and co-creator Gillian Lord, professor and chair of the Department of Spanish and Portuguese Studies at the University of Florida, have been working on for the past six years.

In fact, just about everything about Contraseña is different.

“We flip the classroom,” Rossomondo said. “The instruction takes place outside the classroom, and then we use the classroom for interaction – actually using the language. When they come to class, they do conversational activities based on their preparation.”

This gets to the program’s extensive use of video — both instructional videos of native speakers produced by LingroLearning as well as videos that students produce using their own camera/phone/computer devices to demonstrate their comprehension and conversational abilities.

Rather than using tests, “We set a goal at the end of each week for the students to demonstrate what they are learning by creating their own project based on the text with which they started the week out,” Rossomondo said.

Already, in the first month of using Contraseña in a first-semester Spanish class at KU, Rossomondo said, she is pleasantly surprised by the creativity this aspect of the program has unleashed among students. Responding to the assignment to conduct an interview in Spanish, one student produced a video with visual style and action inspired by “Reservoir Dogs,” while another used a “Dating Game” theme. Such Hollywood trappings are hardly necessary, Rossomondo said, but can add to the fun of learning.

Then there is the social-networking aspect of Contraseña. The students post their projects in an online portfolio where classmates can see them and react. As with Facebook “likes” or Fitbit reminders, the goal is to use positive reinforcement to the students’ advantage.

Rossomondo compares this to demonstrating mastery on a paper test, where students “get their test back, see their grade and shove it into their backpack, never to be seen again. Whereas with the projects and the feedback in Contraseña, it creates a sense of community.”

The lessons themselves are different, too, Rossomondo said, having been created through the process of “backward design.”

“We first identify the learning objectives and design the task and the text that go with those learning objects, and from there we work backward to figure out what language structures and what vocabulary and what cultural understanding a student would need in order to fulfill those objectives,” Lord said in a video produced by LingroLearning.

“You ask yourself where you want your students to end up,” Rossomondo said. “What do you want them to be able to do and know and feel about your subject matter? Then you decide, ‘How will I know if they are actually achieving these desired outcomes?’ And finally, you design learning interventions that will help students get there.”

A variety of texts and videos, produced commercially and recently in the Spanish-speaking world and addressing a broad range of topics, are used to demonstrate the language and cultural realities. This, Rossomondo said, is part of the creators’ philosophy of trying to bridge the gap between students’ “adult brains and baby language skills.”

And there are other aspects of Contraseña that are not possible with traditional text-based learning methods. For instance, Rossomondo said, certain exercises are set up “like a choose-your-own-adventure” game, with differing possible outcomes at every step down a decision tree. The program also facilitates virtual office hours, or online meetings, between students and teachers.

In order to implement and watch her “baby” in action, Rossomondo has returned to teach in a first-year Spanish classroom for the first time in 14 years, and she is loving it.

“I am optimistic,” she said. “I see it working right now. It solves a lot of problems and offers a lot of opportunities at a lower cost. I hope it will become the go-to materials for first-year Spanish and encourage students to go on to use the language and the cultural understandings they develop in their daily lives.”

Video: In September 2018, as part of an assignment in their Contraseña Spanish-language-learning curriculum, first-semester KU students Matthew Minelli and Brandon Keeling (with scene-setting help from Liam Chewning and camera work by Bryce Chmylak) made the video above to demonstrate their conversational skills.