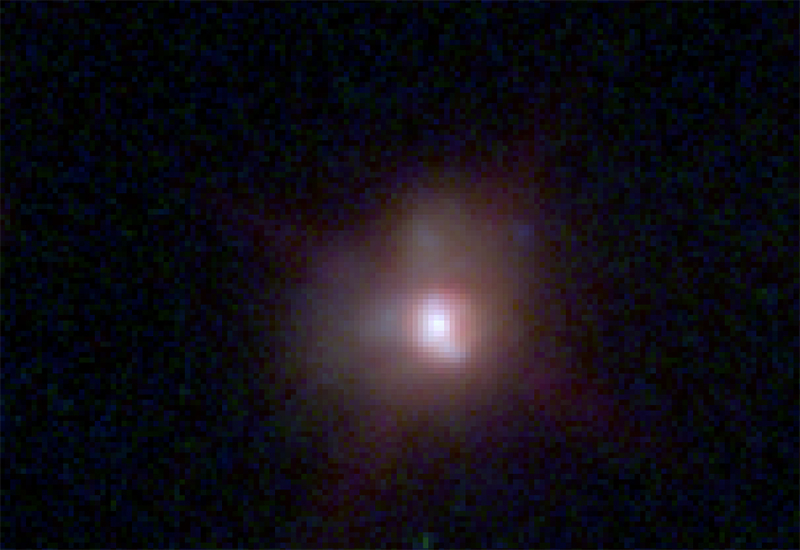 LAWRENCE — Galaxies like our own Milky Way are factories that use gravity to fashion new stars out of molecular hydrogen gas. 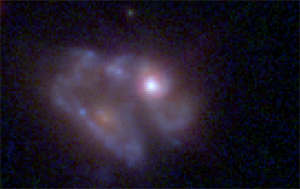 “The Milky Way is turning gas into stars at about an average of the mass of the sun every year,” said Gregory Rudnick, professor of physics & astronomy at the University of Kansas. “The galaxy is filled with gas, and we’re constantly getting new gas from outside the galaxy. This gas falls into the galaxy under the force of gravity, gets formed into stars — and some of the gas gets blown back out of the galaxy.”

But some galaxies have stopped this process of star formation, and astronomers have been hard-pressed to explain why.

“We see plenty of galaxies that don’t form stars,” Rudnick said. “For whatever reason, they don’t have much gas in them so they can’t make new stars. The big question is why. Why do some galaxies shut off? When they shut off, they’re left with the stars they already have, but they don’t make new ones.”

A key to solving this puzzle may be a strange new class of galaxies about 6 billion light years from Earth that are in the process of violently expelling their own gas. Now, Rudnick has teamed up with scientists from around the U.S. under a new grant from the National Science Foundation to study these galaxies as a means to find out why some galaxies no longer have the gas necessary to form new stars.

Part of the process is to question recent conventional ideas about the cessation of star formation.

“One of the ways people have come up with to shut off star formation in a galaxy is to explosively remove the gas through an active galactic nucleus,” Rudnick said. “Every galaxy, including our own, has a supermassive black hole at its center. As gas falls into the black hole, right before it hits the black hole, it gets super-hot, and the energy it gives off can actually blow out the rest of the gas from the galaxy. People like this idea because it’s a mechanism that’s energetic enough to do the job of expelling all the gas from the galaxy.”

However, in 2007 a team of astronomers discovered a set of “self-quenching” galaxies that have shut down star formation by some other mechanism. Rudnick subsequently joined this team, which has led a multiyear investigation of these objects.

“Our research has found this kind of galaxy that has gas being blown out of it at thousands of kilometers per second — that’s over 3,500 times faster than a jet plane — but there’s absolutely no evidence of any kind of gas falling into a black hole,” the KU researcher said. “So, there’s a question of whether or not that black-hole process is required or if there are other ways of doing it. You realize, ‘Wait a minute, the universe isn’t that simple.’ This could tell us really new and cool things about how galaxies evolve.”

With better images of the galaxies from the Hubble Space Telescope, Rudnick and his collaborators realized gas could be expelled from the galaxies purely by the concentrated light of the stars in the galaxies, with no need for any extra energy from gas falling onto the black hole.

“Using HST, these fuzzy dots we saw before from our telescopes on the ground now showed these features that looked like a collision of galaxies — they had lots of streams of stars around. Most surprisingly, they were incredibly compact,” Rudnick said. “The Milky Way has all its stars and gas spread out over 100,000 light years, meaning it takes light 100,000 years to get from one side to another. These galaxies, which are as massive as the Milky Way, look like they had most of their mass crammed into something like 1,000 light years. So, they’re massive, but they’re also super-concentrated. The idea we started developing is that maybe these galaxies are so compact that all the starlight from all the stars in these galaxies jammed into this small space is intense enough by itself to drive the gas out of the galaxies.”

Rudnick said the idea is that stars emit light particles that would bump into particles of gas and “give them a little push. The sum of many of these little pushes is enough to push all the gas out of the galaxy at incredible speeds.”

“When you condense an entire Milky Way into a small spot because of a merger of galaxies, it can cause hundreds of billions of stars to be in a very compact place,” he said. “When that happens, you can put enough light into a small enough space, and that can be enough to push all of the gas out of a galaxy, with no extra energy needed from gas falling into a supermassive black hole.”

The NSF grant work will enable further observation and study of this class of self-quenching galaxies. Rudnick said he and his colleagues will be studying the galaxies in as many ways as possible, using telescopes such as NASA’s CHANDRA X-ray Observatory, the Keck Observatories in Hawaii and the Atacama Large Millimeter Array (ALMA) in Chile.

Rudnick has just co-authored a paper appearing in Astrophysical Journal that used the ALMA telescope to look within a self-quenching galaxy at “the densest, coldest gas — the stuff that’s actually forming the stars.” In that paper, they ask, “What evidence do we have for that gas blowing out?”

The KU researcher and his co-authors found the galaxy to be the compact remains of a violent merger between two galaxies.  This “merger remnant” also hosts huge winds of dense molecular gas but without any trace of an active galactic nucleus. They wanted to determine how the fast the dense gas was gas being driven out of the galaxy.

“ALMA uses light with much a longer wavelength than visible light — with a wavelength of a tenth of a millimeter,” Rudnick said. “It turns out carbon monoxide molecules in this gas give off light you can see with a telescope from Earth. Most of the gas is actually hydrogen, but hydrogen is hard to see from Earth, so we pick a trace gas. It’s a lot like natural gas, you can’t smell it, so they put something in it to make it smell like rotten eggs. Carbon monoxide works like that, in that it tells us where the hard-to-see molecular hydrogen is. We use ALMA to detect carbon monoxide and use that to detect how much total molecular gas. We found this gas, which makes up much of what the galaxy has, is moving from the center of the galaxy at 1,000 kilometers per second. It’s really the stuff that forms stars that’s being blown out.”

Top and top right images: Color Hubble Space Telescope images of "self-quenching" galaxies 6 billion light years away. The bright dot in the center is the compact area, and some fuzz around the edges tells researchers it’s a merger remnant.

Bottom images: CO J(2 → 1) maps of the galaxy SDSS J1341−0321 averaged over 333 km s−1channels spanning ΔV = ± 1500 km s−1 (labels give channel centers) relative to the systemic redshift. The top row shows the naturally weighted images, and the bottom row shows the Briggs (R = 0) weighted images. Contours start at 2σ and are logarithmically spaced at 0.2 dex multiples of σ. Dashed contours are negative equivalents. The crosshair indicates the peak of the stellar emission in the HST/F814W imaging (Figure 1). Black ellipses show the fwhm of the synthesized beam."

All images courtesy of Gregory Rudnick.