LAWRENCE — At the end of every summer, football teams take to the field while temperatures still reach triple digits. And seemingly just as often, tragic stories about an athlete suffering from heatstroke and even dying make the news. Marching bands also return to action the same time every year, and many might not realize the musicians are prone to all the same injuries, dehydration, heat illnesses and risks as other athletes. A University of Kansas researcher is leading a study to examine the risks marching band members face and what can be done to treat and prevent problems so often associated with other sports. 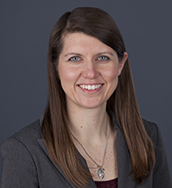 The importance of hydration in athletics is well-established. But few headlines are devoted to band members collapsing in the heat after marching in heavy wool uniforms, carrying instruments and expending massive amounts of energy. Dawn Emerson, assistant professor of health, sport & exercise science at KU, is leading a pilot study with Toni Torres-McGehee and Susan Yeargin of the University of South Carolina. They will take a battery of measurements from 10 members of each school’s marching band to see how well they hydrate, if they are at risk for heat illnesses, disordered eating and a host of other risks.

A former high school and college clarinet and bassoon player, Emerson saw the injuries band members suffered then and as an athletic training professor now.

“Having gone through that and knowing the intensity of band camp and knowing people often think, ‘They’re not athletes, why should we care?,’ I wanted to research this topic more,” Emerson said. “Just like with athletes in other sports, heavy uniforms and equipment reduce their ability to stay cool and hydrate.”

Emerson and graduate research assistants are taking measurements from 10 KU band volunteers over the course of several practices and two football game performances. The volunteers are wearing activity monitors around the clock that measure heart rate, amount of sleep, steps taken and other measures. They also take a pill six hours before activity that can send data from the individual’s small intestine to a handheld radio unit about core temperature. Researchers in South Carolina will also apply patches to volunteers’ skin to measure skin temperature during activity. And all volunteers are filling out surveys about their diet, amount of liquid they drink per day, type of liquids they drink, gastrointestinal issues, medications taken and more. The researchers are also collecting urine specimens from volunteers to measure how hydrated they are during band activity.

The pilot study will provide preliminary data on the rates at which band members are dehydrated, if they suffer heat illness, are at risk for disordered eating and other risks. The researchers hope that data will be able to inform further studies into the risks of band participation, especially in the heat. Many bands do not have a dedicated athletic trainer. South Carolina does, while KU does not, for example. The number of college bands with dedicated athletic trainers is growing, but thousands of participants still do not have them. Those who do not are forced to look elsewhere for care when needed, Emerson said, such as campus health services.

High school bands rarely have the personnel or funding to provide dedicated athletic trainers for band. Earlier this year, several high school band members in Oklahoma and Texas were hospitalized for severe dehydration, heat stroke and heat exhaustion after practicing in extreme temperatures.

Despite the lack of dedicated care, Emerson said band participants are at risk for many of the same injuries as athletes in other sports. Musicians commonly suffer concussions from being hit by flags, instruments or collisions with other members, lower back and extremity injuries or joint injuries from practicing on pavement. Practice surface can pose other risks as well, as asphalt, concrete and pavement can increase the temperature and reflect heat in addition to increasing risk of joint injuries. Researchers will be measuring temperatures volunteers participate in, measuring the “wet bulb globe temperature,” which includes radiated heat, giving an even more in-depth look at the true temperature bands participate in than heat index.

KU and South Carolina researchers will compare the data they collect and share their findings with the National Athletic Trainers' Association and other sports medicine professionals. If they are able to establish levels of risk and further research is needed, they plan to study the issue further and examine additional questions, including if playing certain instruments presents a greater risk and further delve into how an individual's physical characteristics can influence potential risk.

“Ideally we want to have the information to say, ‘This is what you should look for in this population, and here’s how you can manage these risks, and prevent them with policy,’” Emerson said. “I’m excited to do this work with a group of individuals I can relate to and to point out that they deserve the attention and care as well.”