LAWRENCE — The Spencer Museum of Art has selected a portrait of Marie Laveau painted by Ulrick Jean-Pierre as the KU Common Work of Art to accompany the 2018-2019 KU Common Book, “Create Dangerously: The Immigrant Artist at Work,” by Edwidge Danticat. 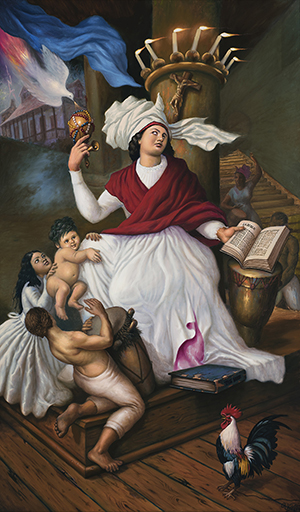 Marie Laveau was integral to the development of the voodoo religion in New Orleans and is an important figure in both Haitian and American history. Jean-Pierre, a Haitian-American artist based in New Orleans, created this portrait of Laveau specifically for the Spencer’s exhibition “The Ties that Bind: Haiti, the United States, and the Art of Ulrick Jean-Pierre in Comparative Perspective,” which opens Sept. 8 and remains on view through Jan. 6, 2019.

“Jean-Pierre’s work will nicely contextualize many of the historical events that Danticat references in her book,” said Spencer Curator Cassandra Mesick Braun. “Both Danticat’s writing and Jean-Pierre’s artwork will encourage students to address connections between current events and history in ways that feel pressing and important right now.”

“The Ties that Bind” will include 11 other paintings by Jean-Pierre in conversation with significant Haitian artworks from the museum’s collection. The exhibition explores themes of the Haitian Revolution and the fight for freedom, the role of women as leaders, the migration of people between Haiti and the United States, and the role of religious expression in the everyday lives of Haitians.

Cécile Accilien, associate professor and director of the Institute of Haitian Studies at KU, co-curated the exhibition with Mesick Braun. Accilien said an important aspect of Jean-Pierre’s work is how he centers women’s contributions in Haitian history, as is the case in his portrait of Laveau.

“Jean-Pierre is at once a griot or storyteller, a troubadour, social commentator and cultural marker. He is also an artist engagé, meaning that he uses his art as a medium to raise awareness while bringing forth social and political change,” Accilien said.

Until “The Ties that Bind” opens, the Common Work of Art will be on display in the museum’s Jack & Lavon Brosseau Center for Learning, along with works from the museum’s collection that expand on topics explored within Danticat’s narrative and Jean-Pierre’s work.

New Orleans–based Haitian-American artist Ulrick Jean-Pierre is joined by co-curators of “The Ties that Bind,” Cassandra Mesick Braun and Cécile Accilien, for a discussion that addresses artmaking as social history.

Haiti, New Orleans, and the Ties that Bind

Join Ulrick Jean-Pierre for a discussion of how his identity as a Haitian immigrant shapes his artistic practice.

The Ties that Bind

Delve into the ideas behind the exhibition “The Ties that Bind” with co-curators Cassandra Mesick Braun and Cécile Accilien.