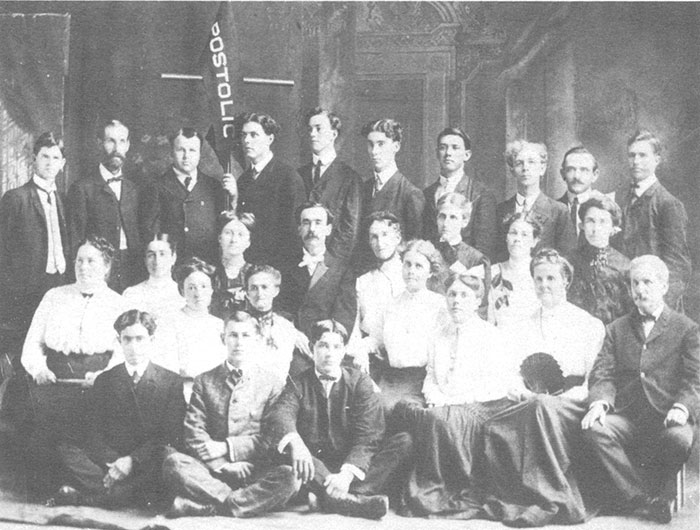 LAWRENCE — The modern Pentecostal religious movement began in Topeka in 1901 — though historians have often given Kansas less credit than a subsequent movement in 1906 in Los Angeles as it spread across the world.

Now a group of University of Kansas scholars will work to document the Kansas roots of the movement, thanks to a recent $5,000 Humanities Kansas grant. 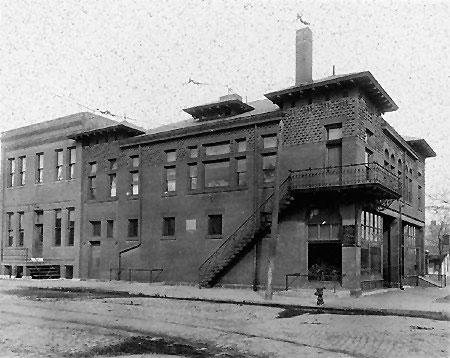 "Pentecostalism is now a very large denomination of 279 million people, but the fact that it got its start in Kansas is something that not a lot of people know," said Patricia Cecil, archivist associate at the Department of Religious Studies. "The Religion in Kansas Project endeavors to share the diversity of religious experience and the history of Kansas."

Cecil as the project director and Tim Miller, professor of religious studies, who will serve as a humanities consultant, will lead a team of graduate student interns beginning this fall to conduct research on the origins of the Pentecostal movement that began with the Rev. Charles Fox Parham in Topeka.

Miller, whose research portfolio includes new religious movements and intentional communities, started the Religion in Kansas Project in 2009 to allow KU scholars and students to conduct research on the broad range of religious groups and document their history in the state. The project places emphasis on making these resources free to the public and easily accessible online.

Within Protestant Christianity, Pentecostalism is a renewal movement that places special emphasis on direct and outwardly visible personal experience of God, including through "speaking in tongues," which is documented in the Bible in Acts among the original Christian apostles. It is also known for its revival-type enthusiasm during gatherings.

In Topeka around 1900, Parham, a Methodist originally from Baxter Springs, had come to Topeka seeking an innovation in faith that included potentially faith healing. He was able to gain the use of a building near Fourth and Jackson streets in Topeka known as the Bethel Healing Home.

The building still stands and is operated by a nondenominational church group with Pentecostal roots.

"Parham had been obsessed with the question, 'How can you externally and objectively prove you've been saved?'" Miller said. 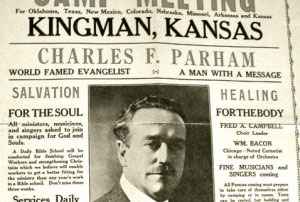 He gained a group of students and others from the town as followers. One woman on Jan. 1, 1901, began speaking in tongues in front of the group among others, on the date typically considered the Pentecostal movement's founding, Miller said.

However, the group somewhat fizzled out locally, and Parham traveled to other places across the country in following years. An African-American preacher, William Joseph Seymour, learned from Parham in Houston, and Seymour started the Azusa Street Revival later in Los Angeles in 1906, which is more commonly credited as the start of Pentecostalism, Miller said.

Researchers in Kansas hope to bring more attention to what originally happened in Topeka as Pentecostalism became a major worldwide religious movement.

"It is a very important historical movement, and we deserve the credit of our role in getting it started," Miller said. "Part of the appeal was people were searching for a biblically authentic Christianity."

As part of the project, the KU researchers hope to interview anyone who might have heard stories growing up with members of the original movement in Topeka. They also will seek records or documents that might still exist including from the Bethel Healing Home.

"This new faith movement in Kansas translated into a worldwide movement. It is really important for the history of our state and also for our shared collective history," Cecil said. "It might help Kansans better understand where we have been and where we are currently with religious experiences."

Miller said as part of the research, they would also like to visit descendants of Parham who still live in Baxter Springs in southeast Kansas and run a small Pentecostal school.

Middle photo: The Bethel Healing Home near Fourth and Jackson streets in Topeka, which is viewed as the site of the founding of the Pentecostal movement. Courtesy: Apostolic Archives International via KU Department of Religious Studies

Bottom photo: An advertisement in a Kingman, Kansas, publication for a meeting with Charles Fox Parham, recognized as the founder of the Pentecostal movement. Courtesy: Kansas Historical Society