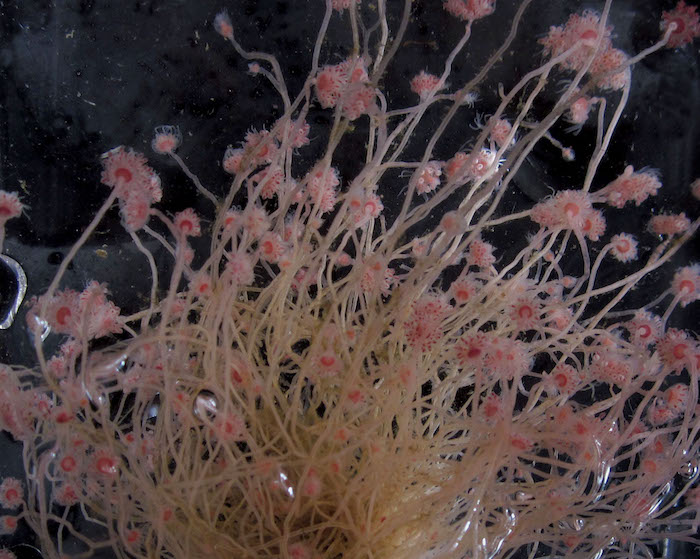 LAWRENCE — We humans will put up with a lot from our relatives. Yet most of us are less charitable with people outside of our family circle.

Not so with a particular shallow water coastal creature. University of Kansas scientists discovered that polyps have no qualms about treating a nonrelated individual like part of the family.

This goes way beyond sharing meals or even a roof. Polyps of the marine hydrozoan Ectopleura larynx allow nonrelated individuals to fuse their bodies to the familial colony and share what is essentially skin and a stomach. 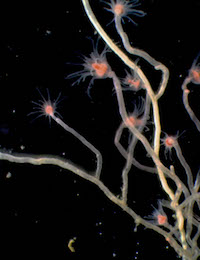 In previous research, Cartwright found that unlike their loner relatives, Ectopleura larynx form colonies of “baby” polyps that fuse to the “mother” and share a gastrovascular cavity — basically, a stomach.

“We just got our minds wrapped around the idea that moms and offspring are fusing and sharing resources and that they’re related, but this was very surprising,” Cartwright said of seeing nonrelated individuals as part of one, big happy family. “And they don’t seem to have a problem with it.”

The polyps are plankton-eating Hydrozoa — relatives to jellyfish and sea anemones — that live in shallow waters, sharing precious space and scarce resources in a spot of the ocean that’s teeming with life, from barnacles and clams to other hydrozoans. Each individual polyp is about a centimeter long and bright pink. A colony fits in two cupped hands.

“I collect them in Maine, and everybody knows what they are when you explain them,” Cartwright said. “They’re colorful, and they grow on docks. They’re very conspicuous.”

These particular polyp colonies are different from others in that they are not simply composed of a mother cloning itself. Rather, they reproduce sexually, and the offspring fuse to the parent.

“For over 100 years, people saw them and thought they were budding, because that’s what hydrozoans do,” Cartwright said. “We brought them in the lab, and I never once observed budding.”

The KU scientists set out to examine the genetic relationships between the polyps of the colony and expected to find individuals that were genetically identical or at least as similar to one another as siblings or as similar as parents to children.

What the team didn’t expect to find was that in addition to close relatives, there were genetically unrelated polyps that fused onto the colony.

“This is super unusual given that in a colony they end up sharing everything from a continuous outer epithelia to an entire digestive system,” Chang said.

Before you think the polyps are all kindness to allow a nonrelative to join the colony, consider the survival advantages of merging so intimately with strangers when you live in a cramped, competitive corner of the ocean.

“In the ecological context that they’re in, it appears that there’s a tradeoff,” Cartwright said. “You could be a tiny little thing with one mouth, or you could fuse with mostly relatives and once in a while a stranger and be a big individual with lots of mouths.”

What makes the discovery so intriguing, Chang said, is that it’s being done by polyps that seem to have lost the ability to form nice, big colonies by simply cloning.

Or to borrow from computer programming lingo, Chang said, it might be a “kluge” for the creatures.

“All of evolution is kind of like that,” Orive said. “You don’t see the perfect solution. You see the solution that the organism had available to it.”

This research was supported by the National Science Foundation and Mount Desert Island Biological Laboratory.

Left: A close-up of a colony shows how the polyps are physically connected and continuous.

Search options »
Subscribe to KU Today
KU in the news
The New York Times — Thu, 09/23/2021
Here is who voted on which booster shot policies the CDC should adopt
The Washington Post — Wed, 09/22/2021
U.S. tariffs on Chinese goods didn’t bring companies back to the U.S., new research finds
There’s nothing inherently wrong with being a competitor, says @KUSOEHS associate professor Jordan Bass, author of… https://t.co/nHGvBUARvz
«»
Follow us on Twitter »
Why KU
Apply »
One of 34 U.S. public institutions in the prestigious Association of American Universities
44 nationally ranked graduate programs.
—U.S. News & World Report
Top 50 nationwide for size of library collection.
—ALA
5th nationwide for service to veterans —"Best for Vets: Colleges," Military Times