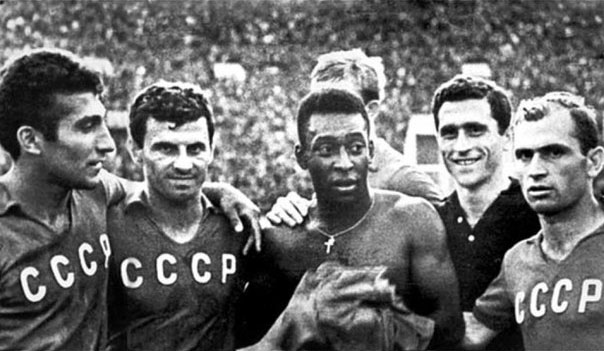 LAWRENCE — This summer's World Cup hosted by Russia and the unexpected success of the Russian national team has shined a spotlight on the region's history with the popular worldwide sport.

A University of Kansas historian has researched how Soviet state leaders promoted soccer during the Cold War as a point of national unity, though major contributors included Georgian footballers who typified ethnic diversity on the Soviet national team. 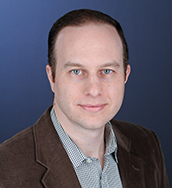 "Only Georgians seemed to offer a visibly ethnic alternative to the style of play present throughout the Soviet Union," said Erik Scott, associate professor of history. "The techniques of Georgian football and the mythology surrounding them emerged from the encounter between a centralizing Soviet state and assertive Georgian republic."

Scott has written a forthcoming book chapter, "Georgian Footballers and Multiethnic Soviet Soccer in the Cold War," for the Stanford University Press volume The Global History of Sport in the Cold War, edited by Robert Edelman and C.J. Young.

Georgian soccer players during the Cold War-era with their more flamboyant style tended to mirror more how South American teams acted on the pitch than the more conservative style favored by other Soviet players, Scott said.

The Georgian fans and athletic promoters often consciously appealed to its association with its national style of dance that included qualities of beauty, ingenuity and agility. Central authorities in Moscow would also invite Georgian dancers to the Kremlin to showcase the state's commitment to multiethnic diversity, he said, and they invited players of Georgia's top club team Dinamo Tbilisi to join the all-Soviet team, known as the sbornaya.

"Georgian and Russian commentators alike saw it as emotional instead of calculating, dominated by dribbling rather than physical defense, and defined by artistic improvisation instead of brute force," Scott said. "Yet it was still held that Georgian players could form a complementary part of the all-Soviet team, which drew heavily on the republics and was meant to showcase the multiethnic diversity of the Soviet Union."

Due to their involvement with the national team, Georgian players gained a prominent place on the world stage by taking part in a type of soccer diplomacy that was a crucial component of the Soviet Union's outreach to the post-colonial world, similar to how the United States sought to demonstrate it had surmounted its racial problems by sending hundreds of African-American athletes on international goodwill tours, Scott said.

There seemed to be unintended consequences for both the central-Soviet promoters and the sport's backers in Georgia, he added.

"The successes of Dinamo Tbilisi, a club originally founded under the auspices of the Soviet Union's secret police, came to be seen as a series of national triumphs, rather than achievements of the broader Soviet Union," he said.

In fact, Georgian Dinamo Tbilisi supporters would become irked at international press accounts that described the team as "the Russians" and "the Soviets," as if the terms were equivalent, Scott said.

"In the end, Georgian supporters blamed the lack of foreign recognition on the inability of their team — and, by extension, their country — to truly stand alone on the world stage," he said.

In 1990 Dinamo Tbilisi withdrew from the Football Federation of the USSR and changed its name to Iberia Tbilisi, which referenced the ancient kingdom of eastern Georgia. Though freed from Soviet-era constraints, the club has yet to match its past successes.

The Georgian civil war from 1991 to 1993 and the collapse of the nation's economy made it difficult to keep soccer talent at home. Georgians have played abroad for some of the world's top clubs and become popular celebrities at home — the current mayor of the Georgian capital first became famous as a starter for AC Milan. But the Georgian national soccer team has not yet been able to qualify for the FIFA World Cup.

In the post-Cold War era, it has become even more difficult to see soccer as representative of a clear-cut national character, both in Russia and elsewhere, Scott said, with the ownership and rosters of club teams reflecting a rise in globalization and soccer tactics widely imitated across borders.

Yet Scott believes that Soviet-era discussions about diversity on the pitch anticipated current debates surrounding the European teams remaining in the 2018 World Cup.

"Most of these teams feature the descendants of migrants from former European colonies and factor prominently into discussions about the scope of European national identities," he said.

As for this year's Russian team, Scott pointed out that its top scorer was a Russian raised in Spain. Its right back was born in Brazil. Several starters are of Ukrainian heritage, and its head coach hails from North Ossetia, a region neighboring Georgia in the Caucasus where soccer is exceptionally popular.

"While the team's unexpected success in the tournament might be seen as a win for Russian politicians proclaiming national unity, it also reveals Russia's connections to a changing world and the complex legacy of diversity within the Soviet Union," he said.

Photo: Brazilian soccer star Pelé in this historical image met with Georgia members of the Soviet national team after a 1965 match in Moscow. Credit: RIA Novosti, successor to the Soviet news agency.