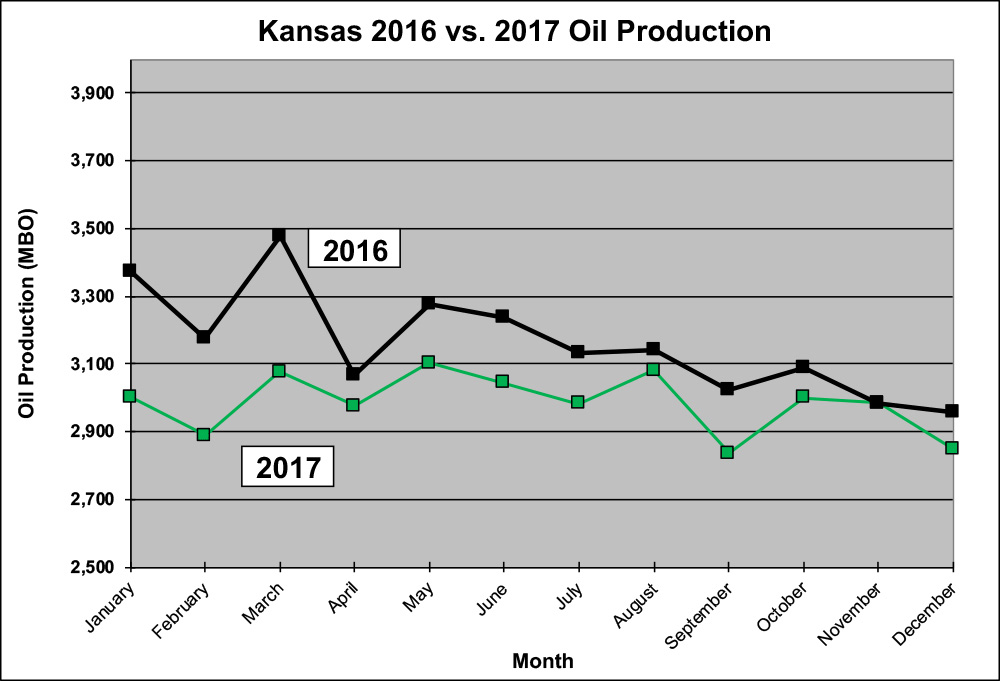 LAWRENCE — Kansas oil production decreased in 2017 even as oil prices increased, according to estimates from the Kansas Geological Survey (KGS) at the University of Kansas. Natural gas production fell as gas prices remained low and output in the state’s largest gas area continued to taper off.

“Oil prices rose fairly steadily in the first half of 2017 from the low $40s per barrel to the low $60s,” said KGS geologist David Newell. “Since then, the price has bounced between $60 and $65 a barrel, but the rate of drilling in Kansas hasn't picked up appreciably.”

Oil companies may not be confident that prices will be sustained in the future, or they may think the risk inherent in drilling isn’t worth taking unless prices rise further, Newell said. Prices peaked at about $100 per barrel in 2014 then fell to under $30 a barrel by early 2016 before rising again.

During the horizontal-drilling boom in south-central Kansas between 2012 and 2015, more than 700 wells were drilled in a tier of counties, including Harper, just north of the Oklahoma state line. Both oil and natural gas production in the area escalated rapidly. Due to the geologic characteristics of the producing zone, however, production rates started strong, then dropped drastically.

In 2015, Harper County soared from the middle of the pack to be the state’s top oil-producing county, but by 2017 it had slipped to ninth. Output in the area fell significantly in 2016 and continued to decline in 2017, with little new drilling.

Ellis County in western Kansas continued to be the top producing county in 2017 after regaining the lead in 2016. It has led for most of the past 50 years.

“In 2015, 2016, and 2017 Haskell County has had somewhat of a mini drilling boom after several new Mississippian and Pennsylvanian fields were discovered,” Newell said.

Harper and Barber counties experienced the greatest declines, with production dropping 52 and 17 percent, respectively. Most of the oil in those counties comes from the Mississippian play that ignited the horizontal-drilling boom.

“There are small pockets of relatively untapped gas in the Hugoton Field, but overall and despite any effect of price fluctuations, the field is depleting,” Newell said. “It will continue its long venerable decline in pressure and production rates pretty much unaffected by price.”

Natural gas production in all of the top-10 gas-producing counties was down, with the largest decline in Harper County at 26 percent.

Stevens County, which produced about 26 billion cubic feet, was the top producer. It was followed, in order, by Grant, Harper, Kearny, Barber, Haskell, Morton, Finney, Stanton and Seward counties. All are in the Hugoton natural gas area except Harper and Barber counties, where production was mainly from the Mississippian play.

Current and historical production data for the entire state, as well as by county, field, lease and operator, are available online.