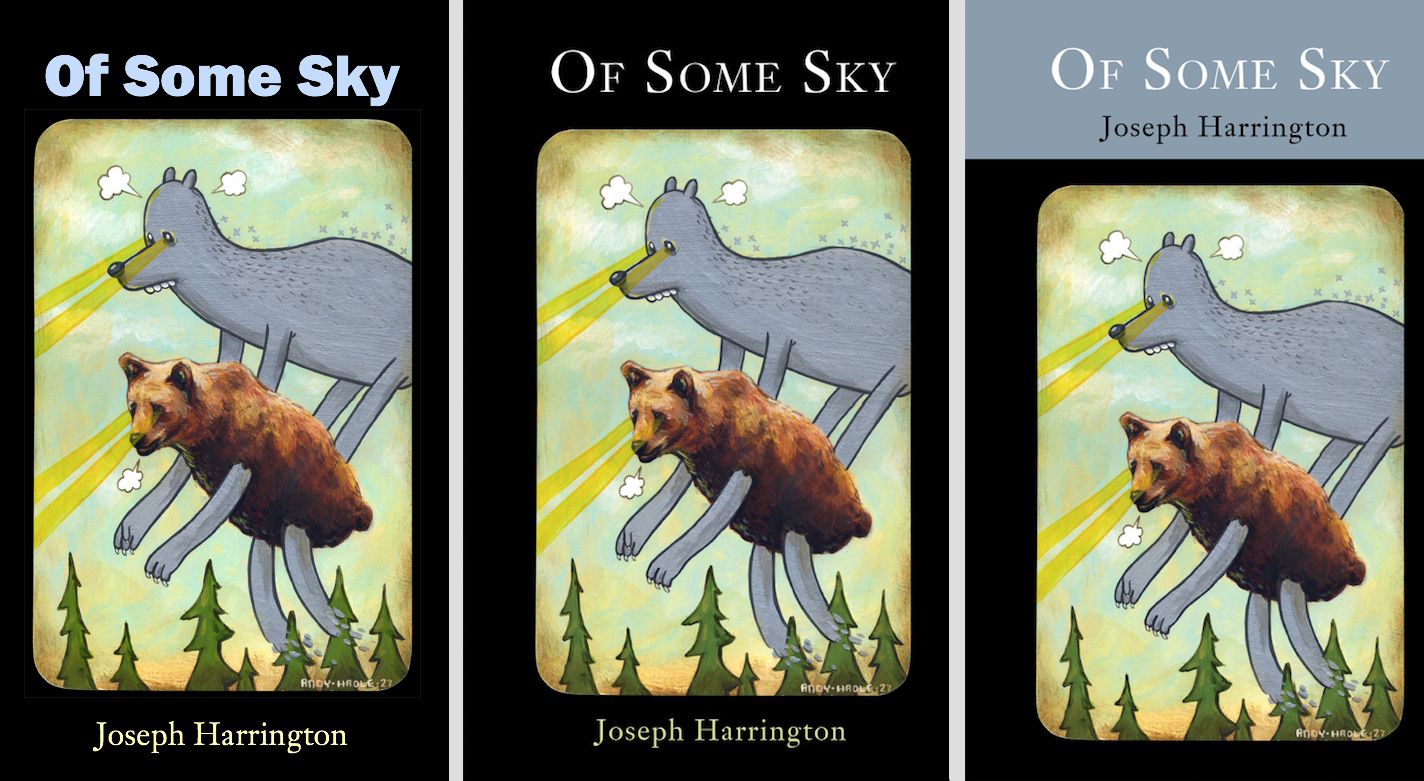 “The painting is titled ‘Wendigo,’ which is a cannibalistic monster in Algonquin traditions,” Harrington said. “In his version, this evil spirit is shown as a goofy cartoon bear, and I thought that combination summed up what I am trying to get at in the book.”

The juxtaposition of whimsy and menace — specifically, the dread of environmental disaster — runs through the collection by the University of Kansas professor of English, who has concentrated on experimental forms throughout his career. It’s his first collection of poetry as such.

The poem “TEX AVERY, Environmentalist” is central to “Of Some Sky.”

In it, Harrington writes, in part:

here Tex’s gaze would hover at the horizon, where sun-dogs whited out the landscape in multiple mirages, as he powered his 98 Regency Brougham (leather, AC, power everything, rotting hoses, the works) across the fragile tundra. “I’m gonna feel really bad about this someday.”

The author writes an acknowledgment that the titular character “bears no relation to the actual Tex Avery (1908-1980). However, the style and tone of the poem – and of this book – owes much to the work of that great animation pioneer.”

Avery was, if not sole creator, a guiding creative force in the classic American cartoon characters Bugs Bunny, Daffy Duck and Porky Pig, among others.

“Tex Avery came up with all these cartoons of animals doing violent, nasty things to one another,” Harrington said. “I went to a Tex Avery film festival one time, and I came out thinking it was funny, but it was creepy. So funny/creepy is kind of what I am going for here. That’s the way I see the trend of things.”

Harrington said he tried in the book to explore the notion that “our idea of the natural world is a cartoon,” ala Tex Avery. And conversely, “Even our environmentalism is based on irrationality and projection,” he said.

“Claudia Rankine, in her 2004 book, ‘Don’t Let Me Be Lonely,’ talks about ‘the American fantasy that we will survive, no matter what.’ It sums up the mindset that I am trying to explore in the book,” Harrington said. “Just because you’re not a climate change denier doesn’t mean you’re not in denial about climate change.”

Harrington took the book’s title from a line in the poem “To Elsie” by William Carlos Williams:

“as if the Earth beneath our feet

the excrement of some sky.”

“That’s a big theme in the book,” Harrington said; “this unconscious notion that the physical world isn’t really real; that the action is somewhere else. It might be heaven. It might be making American great again. It might be some idealized future. But it’s this sense that the Earth, the body, they’re either not really real or not worthwhile.  And a lot of religious fundamentalists will embrace that idea quite consciously, but I think all of us have that notion to some extent stuck in our psyche.”

Harrington said some poems in the book were written in the past year or two, and some were much older but seemed to fit with the theme of the book. Harrington keeps a notebook in his shirt pocket to write down scraps of conversation, advertising pitches, etc., that he hears and wishes to file away for future poetic reference.

Harrington said that, rather than approach poetry as a form of self-expression – something inside that has to come out – he tried particularly in these verses to respond to “the outside.”

“The poet Jack Spicer said it comes from outside – maybe the unconscious, maybe the muse,” Harrington said. “He said maybe it’s the Martians. But you allow these ideas to come into your head, and if they strike a chord and maybe they scare you a little, then you are probably on to something.”

Harrington will read from “Of Some Sky” at 4:30 p.m. Tuesday, April 10, in the Jayhawk Ink Lounge of the KU Bookstore in the Kansas Union. The event is free and open to the public.