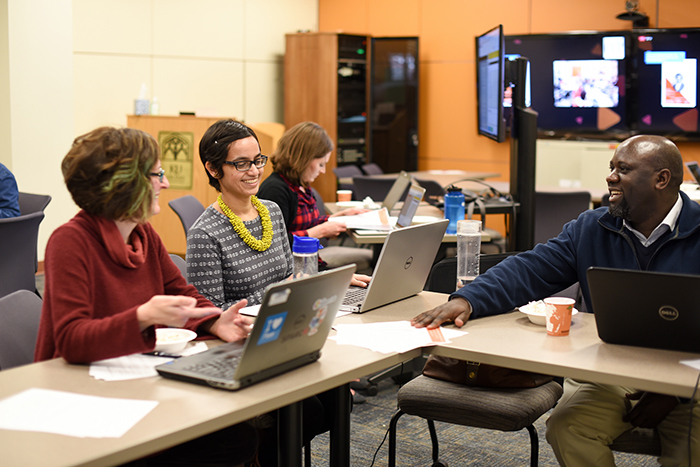 LAWRENCE — Hashtags have guided the conversation on everything from lighthearted discussions between friends to international movements such as the Arab Spring. But if one were to study them, where would one start, and how would they find, store and analyze them? Those are a few of the questions Dhanashree Thorat is addressing in her new role as a digital humanities specialist with the University of Kansas Libraries’ Institute for Digital Research in the Humanities.

Thorat, a post-doctoral researcher in digital humanities, is conducting research, teaching and building communities through her work in the libraries. In doing so, she’s working at the intersection of technology and humanities to make new forms of scholarship possible while building knowledge and creating collaborations among faculty, students, researchers and others outside the university.

Her research focuses on “hashtag activism,” or specifically, how Muslims in America have used the practice as a means of resistance and countering narratives that broadly portray them as terrorists, criminals, anti-American or in other negative stereotypes.

“I was interested in how Muslims resisted misrepresentations in American culture and literature,” Thorat said. “So I’m looking at how they use hashtags to reclaim citizenship, challenge anti-Muslim narratives, articulate their own racial identities and other such topics in a digital landscape. There are a lot of conversations happening in mainstream media about Muslims that don’t involve Muslim voices, so I’m looking to see how Muslims insert themselves into these conversations through social media.”

As one might imagine, it could be extremely tedious to wade through thousands of tweets and social media posts to analyze such a topic. That is where she turns to digital tools to aid her work. Instead of gathering 50 or so tweets, she can gather thousands and perform data mining and analysis on how they address race, religion, nationality, identity and more. While ephemeral by nature, hashtags and online conversations provide insight into our times and movements that are valuable to scholars now and will continue to be for future generations.

“Academic libraries don’t yet collect hashtags, Facebook posts, tweets or YouTube comments, but if people want to study this in the future, how do we collect them while addressing issues around privacy, consent and ethics?” Thorat said.

While she plans to publish results of her research in traditional academic channels such as scholarly journals, she also intends to follow the direction of the digital humanities field and make the findings available in an open access format to anyone interested in learning about the topic.

The methods she uses to perform the analysis are also at the heart of her teaching and service to university scholars. She is teaching a digital humanities methods course, instructing undergraduate and graduate students on practices including data visualization, mapping, data mining, algorithms and archiving. The course takes a theoretical and hands-on approach to addressing questions such as biases in software algorithms and understanding technologies like Google Maps and geographic information systems, or GIS.

“You have to be a critical thinker and user of technology,” Thorat said. “I think students are aware of current news about the internet, and it’s important to give them the theoretical terms to enter and connect with the conversations that are happening in digital humanities. I view that as a big part of my role.”

Connection is also key in the community building aspect of the role. She is consulting with organizations both in and adjacent to the university such as the Spencer Museum of Art, Haskell Indian Nations University and Lawrence Public Library to foster a culture of digital humanities in their respective spaces and between the groups. Thorat is in the process of developing a Social Media Toolkit that will be housed at KU and designed to help scholars conduct their own social media data mining. It will feature tools to get started, how to gather data, perform data mining and provide resources such as model cases, questions and answers about ethics of mining data and more. While the toolkit will enable scholars to conduct social media data mining, Thorat has already started making connections among scholars to do similar collaborative projects. One example is scholars from indigenous studies, film & media studies and the Institute for Digital Research in the Humanities who have begun working together on building an indigenous media lab.

Thorat is also playing a role in digital pedagogy, helping instructors of all disciplines build digital components such as digital mapping, data mining or digital exhibits into their classes. The DH Studio will soon host workshops on topics such as Wikipedia editing, GIS and digital classrooms for projects, and it also provides a physical space for DH events collaboration.

“It’s intended to bring very different people together,” Thorat said of the DH Studio. “For example, we want literary scholars to talk with computer scientists. When you put people with a different focus in room, the question becomes, ‘What can you build from their different experiences?’ It’s not about prioritizing the digital side of things or saying ‘you need to learn to code’; it’s also about bringing out the importance of humanities and giving those scholars the chance to critique digital conversations. It’s very interdisciplinary.”