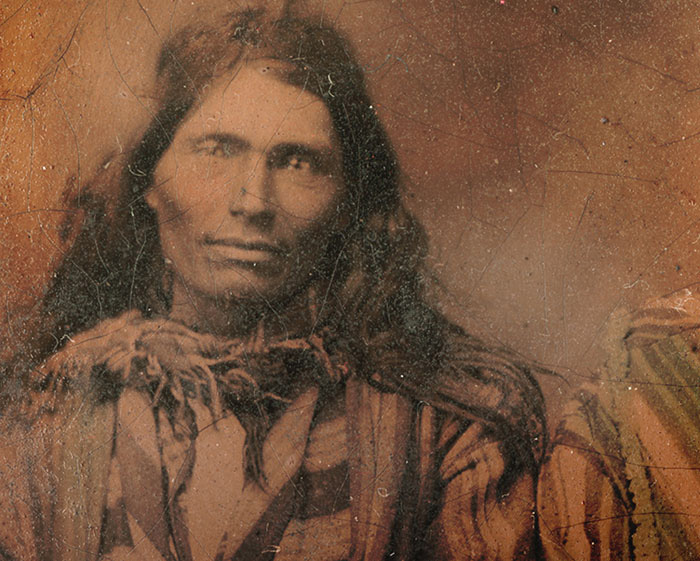 UPDATE: "Ned Christie: The Creation of an Outlaw and Cherokee Hero" was named a finalist in the nonfiction category of the 2019 Oklahoma Book Awards.

LAWRENCE —  Cherokee statesman Nede Wade Christie, also known as Ned Christie, died in present-day Oklahoma in 1892 at the hands of a posse seeking to avenge the 1887 killing of U.S Marshal Dan Maples.

Historians on both sides for more than a century have speculated over the controversial episode of life in the Old West regarding whether Christie actually did kill Maples. According to a new book by a University of Kansas researcher that summarizes her exhaustive research on the case, it's unlikely Christie did it. The case itself tells an important story of justice, the American West, how Native Americans were treated and myth making.

"Americans need heroes, and the image of the wild frontier is the crucial backdrop for the feel-good scenarios of U.S. marshals killing the bad guys," said Devon Mihesuah, the Cora Lee Beers Price Teaching Professor in International Cultural Understanding in the KU Humanities Program. "The case of Christie is a fascinating example of myth making. Writers portray Christie as savage, unrepentant and thoroughly evil, and as someone who needed to be dispatched, not only to protect the innocent public but also to make the lawmen who exterminated him appear more valiant and noble."

In her new book, "Ned Christie: The Creation of an Outlaw and Cherokee Hero," published by University of Oklahoma Press, Mihesuah seeks to place her research on Christie's story within the context of Cherokee governance and 1800s American political and social conditions.

As part of her detailed research on Christie's case, she examined hundreds of newspaper articles, court documents, testimonies, family stories, Indian Commissioner reports and photographs, and she compared the provable timelines and events to Wild West literature. Historically, people have had three different views of Christie.

"One is that he was a thief, a killer and unquestionably guilty of shooting Maples," she said. "Another view is that the real killer of Maples, Bub Trainer, framed Christie, and a posse exacted revenge on him without adequate proof of Christie having murdered Maples."

People who subscribe to the framing theory typically believe a witness with the last name Humphrey watched Trainer kill Maples in Tahlequah, the capital of the Cherokee Nation in present-day Oklahoma.

Several criminals were in the vicinity of Maples that night, Mihesuah said. Another man, John Parris — who in some accounts accused Christie of being the shooter — likely killed Maples, and the Humphrey story was a fabrication, she said.

"My view is that Christie did not kill Maples, but he did have the potential for violence," said Mihesuah, who is a member of Choctaw Nation of Oklahoma and a Chickasaw descendant.

Still, the authorities with the federal court in Fort Smith, Arkansas, focused solely on Christie instead of other suspects.

"The convoluted criminal jurisdiction in Indian Territory is related to politics, and the hot-button political issues likely put Christie into his predicament," Mihesuah said, adding that Christie fought against impending statehood, allotment and railroads, all of which made him a controversial figure.

After not being afforded efforts to seek to evidence to defend himself, Christie evaded capture for five years before the posse eventually blew up his home with dynamite and shot him. They later took his body to Fort Smith and put it on display for three days for photographers and gawkers.

"Christie and his immediate family did not leave behind any letters, documents or interviews. Newspapers did not print any speeches he may have given, and none are recorded in Cherokee tribal documents," she said. "Until more information comes to light, the best we have is intensive research combined with the few family stories that have been passed down, plus overarching common sense."

But she is hopeful extensive research like hers into these cases and others in Native American history can shed more light and avoid similar myth-making examples, especially stories that include components for good storytelling, with each aspect exaggerated and crafted to form larger-than-life tales of an outlaw-infested wilderness.

"That renders a fairer recounting of his and his family's lives besides what we have seen," Mihesuah said. "The Christies deserve that, at least."