LAWRENCE — As an amateur linguist growing up among the Kiowa people a century ago, Parker McKenzie devised a method of writing his native language using English letters. Now his great-grandson, University of Kansas Assistant Professor of Linguistics Andrew McKenzie, is completing a book that will go further than ever before in outlining the grammar of Kiowa. 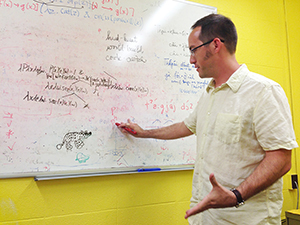 Andrew McKenzie’s work is urgent, he said, because most of the remaining fluent Kiowa speakers (a few dozen) are quite elderly. In fact, several of those he has interviewed have subsequently passed away.

“It’s an urgent task to document the language while it’s still preservable,” Andrew McKenzie said recently. “Teachers of the language will need to know this going into the future.”

As a member of the tribe in Oklahoma, Andrew McKenzie said, “I grew up knowing bits of it. My great-grandfather wouldn’t let us visit without a Kiowa lesson.”

When Andrew McKenzie attended the University of Oklahoma, he found they offered courses in native languages, and, in particular, Kiowa. “After that, I just stuck with it,” he said. 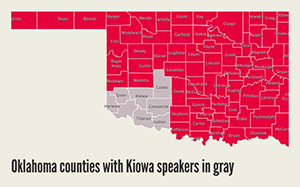 “Like most American languages, its structures are very different from European languages. Words contain many roots strung together, so what takes a whole sentence in English can be expressed in one word; just a verb, for instance. The information in a verb tells you enough about who’s doing what … In Kiowa, the form of conjunctions will switch, so it tells you whether it’s referring to the same person or not.

Andrew McKenzie recently won a three-year grant from the Documenting Endangered Languages program of the National Science Foundation and National Endowment for the Humanities to fill in a gap on Kiowa.

For one thing, there’s no consensus on how to write it using English letters. Parker McKenzie’s method is still taught, as are a handful of others, but Andrew McKenzie says there has never been a tribal vote on the matter.

Using his ancestor’s system, Andrew McKenzie is working on a “semantic grammar” of the language.

After a dictionary, “Most languages have a reference grammar,” he said, “a book that informs linguists about the structure of the language: the sounds, how they interact, forms of words, syntax and the way sentences get built.

“With most American languages, you can do so much with verbs. There is very little about syntax,” he said.

Andrew McKenzie said he is working to document “not just what the pieces mean, but how does the meaning of a sentence get built?”

Modern linguists refer to this as “formal semantics,” Andrew McKenzie said. “With all the different aspects of semantics we’ve found in the last 30 years, no one has documented a whole language’s semantics in a textual way. The idea is it will serve as an example for other linguists, especially those not trained in formal semantics.”

During the grant period, Andrew McKenzie said, he will work on a book, associated scholarly articles and teaching materials including booklets, games and flash cards.

Images: University of Kansas Assistant Professor Andrew McKenzie has received a grant to write a “semantic grammar” of the Kiowa language. Below, a map of where Kiowa speakers live. Images courtesy of Rick Hellman.