LAWRENCE — In a season of scary-clown mania – as in every other season for the past four decades – Stephen King gets all the attention as America’s greatest writer of horror-fantasy.

But the author of a new book on one of King’s collaborators says Peter Straub is actually the better writer, and, in fact, rightful heir to the great American tradition of ghost stories established by Nathaniel Hawthorne, Henry James and H.P. Lovecraft. 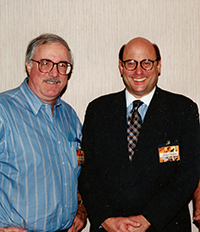 In his new book, “The Gothic Worlds of Peter Straub,” (McFarland, September 2016) University of Kansas Associate Professor of Film Studies John Tibbetts presents the first serious study of Straub, author of “Ghost Story,” “The Talisman” (with King) and “Floating Dragon,” among others. Tibbetts links Straub to a tradition of eerie fiction that goes back beyond Grimm’s Fairy Tales to the Old-World Gothic tradition of the late 18th century, which was then transplanted to the New World and transformed into a uniquely American Gothic. In fact, the Brothers Grimm even show up as characters in Straub’s novel “Shadowland.”

“Straub is a more painstaking writer than King,” Tibbetts said. “He’s a literary horror writer. He’s an intellectual; a man of letters – although he wears that lightly upon his sleeve. He has an academic background, so his stories are shot through with allusions to books, to poetry, to music. He provides the spooks with the best of them, but there is a very intelligent mind that shows through in his work. Many of his protagonists are writers.”

Tibbetts is hardly the only writer who recognizes Straub’s greatness, as Straub’s novels have won the Bram Stoker Award five times, the World Fantasy Award and the International Horror Guild Award, among other prizes.

King recognized Straub as a peer early on, Tibbetts says, and they began collaborating on “The Talisman” early in the word processor/personal computer era, “in an experiment akin to teletype,” sharing their work with each other, modifying and making suggestions until what Straub calls “a third voice – the voice of the book” emerged. 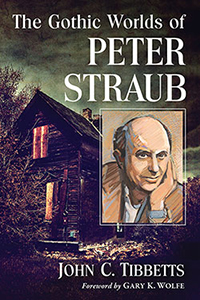 “Each refuses to talk about who did what,” Tibbetts said, “and as time has passed, they claim they’ve forgotten, although I speculate in my book about who wrote certain passages.”

In addition to “Talisman” and “Black House,” Tibbetts said, Straub and King are currently working on a third book together.

King granted Tibbetts a rare interview for his book, Tibbetts believes, because King has such respect for Straub. Tibbetts conducted several interviews with Straub and was the first scholar to make extensive use of Straub’s personal archives, which have been donated to New York University’s Fales Collection.

Tibbetts’s previous books include “Peter Weir: Interviews” (University Press of Mississippi, 2014), “Those Who Made It: Speaking with the Legends of Hollywood” (Palgrave Macmillan, 2015), “The Gothic Imagination: Conversations on Fantasy, Horror and Science Fiction in the Media” (Palgrave Macmillan, 2011), “Schumann: A Chorus of Voices” (Amadeus Press, 2010), “His Majesty The American: The Films of Douglas Fairbanks, Sr.“ (A.S. Barnes, 1977),  “The American Theatrical Film” (Popular Press, 1985), “The Encyclopedia of Novels into Film” (Facts on File, 1998), and “The Cinema of Tony Richardson” (SUNY Press, 1999).