LAWRENCE – The same anxiety that drove the Y2K computer bug panic at the turn of the millennium can be found in “Anna Karenina,” the Russian novel that Leo Tolstoy wrote more than a century earlier, a KU professor argues. 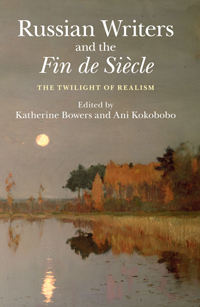 Just as it did in 2000, the turn of the 19th century brought feelings of overwhelming pessimism, anxiety and an apocalyptic sense of an ending. The French dubbed the years between 1890 and 1900 as fin de siècle, a time that the noted French writer Max Nordau described in his 1892 book “Degeneration” as the tension between the feeling of death and the desire for life.

In “Russian Writers and the Fin de Siècle: The Twilight of Realism,” scholars argue that the fin de siècle mood was most pronounced and prolonged in Russia. Themes of foreboding, decline, degeneration, decay and ending influenced Russian realism and some of the greatest Russian writers of the 19th century.

“This anxiety can be found throughout Europe, but in Russia it starts earlier and continues later,” said Ani Kokobobo, an assistant professor of Slavic languages and literatures, who co-edited the book with Katherine Bowers of the University of British Columbia.

The gloominess attributed to the fin de siècle mood dates as far back as Ivan Turgenev’s 1859 novella “A Nest of the Gentry” and continues until the 1917 Russian Revolution.

The book includes 15 essays from established and emerging scholars. Along with Tolstoy and Turgenev, the essays examine the work of other noted 19th century writers such as Mikhail Saltykov-Shchedrin, Fyodor Dostoyevsky, Anton Chekhov and Nikolai Gogol.

“What we are really interested in is what happens to the style that produced ‘Anna Karenina’ and ‘Crime and Punishment.’ At the turn of the century, there is this pessimistic mood, but there is also a lot of artistic experimentation and people playing with different styles. It’s a very productive depression,” Kokobobo said. “It’s clichéd to say, but unhappiness makes for great writing.”

“This anxiety tends to be associated with the boom in technology, and the railroad in particular, and how it was destroying the traditional way of life as they knew it,” Kokobobo said. “Russians glorified their Middle Ages, and groups from both sides of the political spectrum believed that Russia used to be better before Peter the Great tried to make it more European.”

In some ways, Kokobobo said, by rebelling against empirical rationalism, stripping life to the bare bones, using emotionalism and putting characters in positions of crisis and moral dilemma, Russian fin-de-siècle literature reflects the national psyche. While in Europe, there was a belief in the stability of civilization and the middle class, in Russia capitalism, secularism and the modern state weren’t well-developed at that time.

“Instead you have a sense of terrible foreboding and disaster. And in some ways, Russians embrace this,” Kokobobo said.