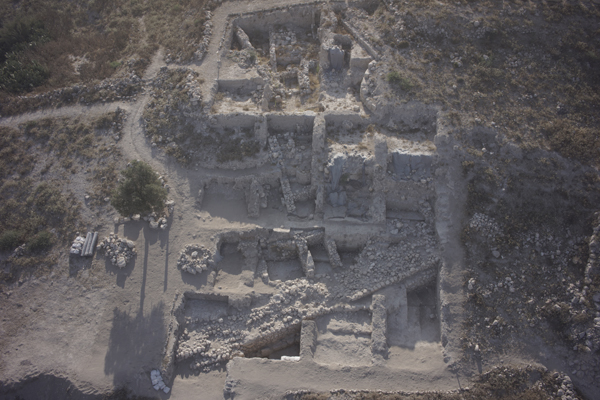 LAWRENCE – A visiting University of Kansas professor is part of an archaeological excavation that discovered the entrance gate and fortification wall to the ancient biblical city of Gath. 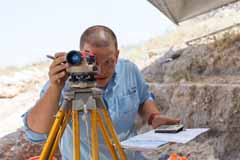 This summer Eric Welch, a visiting assistant professor of Jewish studies, and three KU students were part of a team working on the Ackerman Family Bar-Ilan University Expedition to Gath. Known today by its Arabic name, Tell es-Safi, Gath, which is in central Israel, it was first settled in the Early Bronze Age in about 3500 B.C. From the 12th through ninth centuries B.C., it was occupied by Philistines and is referenced in the Bible as the home to the giant Goliath and later to where David fled to escape King Saul.

In July, the expedition uncovered a fortified wall with towers and what may be one of the largest gate complexes ever found in Israel. Nearby, archeologists unearthed an altar and artifacts linked to textile and metalwork.

“One of the reasons we are so excited, gates are places of administration,” Welch said. “If you look in the Bible, important things happen at city gates. That is where transactions and judgments are made. It is a major portal of the city’s comings and goings. So it is not surprising to find market, religious and industrial activity there.” 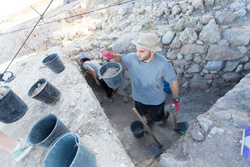 Welch has been part of the expedition since 2006. He is currently overseeing the excavation of an upper section of the site where the city’s elite lived. For four weeks this summer, junior Darra Stuart, Iowa City, Iowa; and graduates William Hershkowitz, Hopkins, Minnesota, and Tyler Engler, Minnetonka, Minnesota, joined Welch.

Artifacts suggest sudden and massive damage to Gath around 830 B.C., when Hazael, king of Aram Damascus, besieged and destroyed the city. A siege trench, one of the earliest ever found, has been dated to that era. Welch described uncovering a room with collapsed walls where dozens of pots remained, a grinding stone was still sitting on top of a grinder, and a jar for wheat was next to one for flour.

“You feel like you are walking into someone’s kitchen,” Welch said. “It was absolute and total devastation, which was horrible for them but really great for archeologists because it gives us a snapshot of life at that moment.”

Little is known about the Philistines, who were often cast as villains in the Old Testament. The uncovering of the gate and the potential to find written inscriptions on or near it could provide more clues to the Philistines’ language, religion and origin.

“We know they were the bad guys in the Bible, but we don’t know exactly why,” Welch said. “We are trying to better understand their culture.”

After 830 B.C., the archeological record indicates the Philistines never returned to Gath. Later Judeans, Romans and Muslims lived on the site. During the Medieval Crusades, a fort and castle were built there.

Next year, Welch would like to bring more KU students to dig at Tell es-Safi. Plans are for Welch to direct work on a new section near the gate entrance.

Each summer, volunteers are welcome to come to the site and dig.

Middle image: Eric Welch, who has been working at Gath since 2006, takes measurements.

Bottom image: William Hershkowitz, who graduated this year, was among the three KU students who were part of the team this summer.