LAWRENCE — The University of Kansas School of Engineering steel bridge team earned a spot at the national competition thanks to a strong showing at the American Society of Civil Engineers Mid-Continent Conference regional conference April 4-6.  The Jayhawks placed third overall in the 12-team field to earn their spot in the national competition May 31-June 1 at the University of Washington in Seattle. 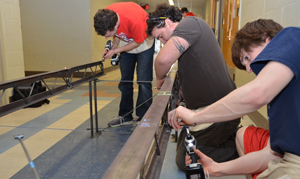 Key to the team’s outstanding performance was its success in the economy portion of the competition, which takes into account construction time and the number of team members active during construction.

“We used only three team members to construct the bridge. No other team used less than five,” said KU steel bridge team captain Zach Olson, a junior in civil engineering from Ellsworth. “Our bridge was also very light … one of the lightest at the competition, with a weight of only 162 pounds.”

Teams were challenged to construct a bridge at least 19 inches high that supported a total of 2,500 pounds – 1,500 on its main span and an additional 1,000 pounds on a section known as a cantilever that extends without direct support at least 3 ½ feet over an area designated as a body of water.

KU finished second in economy, third in lightness and third overall. From now until the national competition, Olson said the team plans to work on improving the overall construction process to make it cleaner and faster.

“We will change our approach just a little to ensure that we avoid any penalties. We are also going to experiment with different numbers and approaches to see if we can drastically improve construction time,” Olson said.

The KU Concrete Canoe team also had a strong showing at the ASCE Mid-Continent Regional Competition, placing second overall and just missing a spot at nationals.  KU took first place in final product and oral presentation and third place in the co-ed race.

“I am extremely happy with the team's accomplishments this year,” said Concrete Canoe co-captain Jeremy Boger, of Asheville, N.C. “We have already been making plans to improve on every aspect of the competition … including trying to find a winter facility to have paddling practice for next year. I am confident that we will be asking the civil engineering department for the money to travel to nationals next year.”