LAWRENCE — A team of University of Kansas law students earned the opportunity to compete in the international rounds of the Philip C. Jessup International Law Moot Court Competition after qualifying recently as finalists at the regional level. 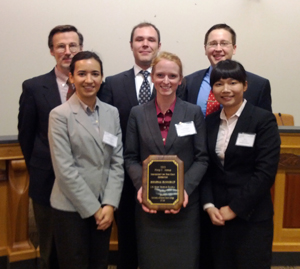 The Jessup competition is a simulation of a fictional dispute between countries before the International Court of Justice, the judicial body of the United Nations. This year’s competition required students to argue both sides of a fictional case involving the consequences of climate change on statehood, migration and sovereign lending. Now in its 54th year, the Jessup is the world’s largest moot court competition, with participants from over 550 law schools in more than 80 countries.

“Since September, we’ve taught ourselves international finance, human rights law, environmental law, and what it means to be a State,” said Pearce, a third-year law student. “Our commitment and preparation paid off during oral argument. We were ready for everything the judges threw at us.”

Barton expressed pride in the team’s extensive preparation for the competition and gratitude to the KU law faculty members who helped ready him and his teammates for arguments. He joked about his fifth-place oralist finish behind Pearce, who earned her bachelor’s degree at KU.

“As a former Wildcat, I guess it’s only appropriate that I finished just behind an incredibly talented lifelong Jayhawk, and happily so,” said Barton, who went to Kansas State University before law school.

The KU School of Law boasts a history of success in the Jessup competition, advancing to the international rounds five times in the past 25 years. The competition is part of an extensive moot court program at the law school, which includes an in-house competition for second-year students and many opportunities to face off against other law schools in national and international competitions. The KU School of Law’s moot court program ranked 26th in the nation in the University of Houston Law Center’s 2011-12 rankings.