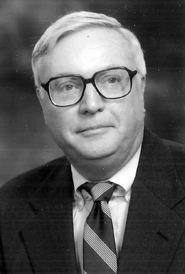 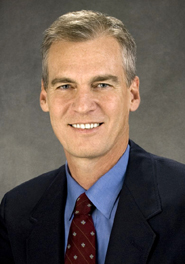 LAWRENCE – The former governor of Kansas and an accomplished leader in the banking and insurance industries will receive the highest honor given by the University of Kansas School of Law.

Mark Parkinson, Class of 1984, and Charles Hostetler, Class of 1963, will receive the Distinguished Alumni Award during a ceremony May 5 in Lawrence. The award is presented annually to graduates who have distinguished themselves through exemplary service to the legal profession, their communities, KU and the state or nation.

“Mark Parkinson illustrates how far a KU Law degree can take a person,” said Stephen Mazza, dean and professor of law. “His notoriety and success reflect well on the law school. It’s an honor to claim him as a KU Law grad.”

“Charlie Hostetler is one of our most loyal and supportive alumni,” Mazza said. “When you combine that with all his success and his stature within the business community in central Kansas, the choice was an easy one.”

Also recognized at the ceremony will be new recipients of the James Woods Green Medallion, named in honor of the law school’s first dean. The school presents medallions to its major financial contributors. This year’s honorees are Roger Johnson, Class of 1967, on behalf of the Arne L. Johnson Family Trust; Kelley Sears, Class of 1974; Shannon L. Spangler, Class of 1987, and Michael Spangler; and Marie Woodbury, Class of 1979.

A Kansas native, Mark Parkinson graduated summa cum laude from Wichita State University. He continued his strong academic performance in law school, graduating first in his class from the KU School of Law in 1984. During law school, he served on the Kansas Law Review and argued with the team that won the National Moot Court Competition in New York. After a few years of solo practice, Parkinson was elected to the Kansas House of Representatives and, two years later, the Kansas Senate. From 1996 to 2006, he focused on enhancing seniors’ quality of life by opening 10 facilities in Kansas and Missouri. He became lieutenant governor to Kathleen Sebelius in 2006, and he was sworn in as the 45th governor of Kansas when Sebelius was appointed U.S. Secretary of Health and Human Services. Currently, he is president and chief executive officer of the American Health Care Association and National Center for Assisted Living, which represents more than 11,000 for- and not-for-profit nursing homes, assisted living residences, and facilities for the care of people with mental retardation and developmental disabilities.

Charles Hostetler earned a bachelor’s degree from Kansas State University in 1960 before venturing into Jayhawk territory, receiving his Bachelor of Laws from the University of Kansas School of Law in 1963. During law school, he participated in moot court and was a member of the Kansas Law Review. Following graduation from KU Law in 1963, he returned to Manhattan and began a very long and successful career in the banking and insurance industry. He was the former chairman of the First Savings Bank of Manhattan and currently serves as president of Charlson & Wilson Insurance Agency Inc. Hostetler taught business law and insurance for several years at Kansas State University, his undergraduate alma mater. He served on the Kansas Board of Regents from 1989 to 1992 and is a past member of KU law school’s Board of Governors. Each spring, he hosts an alumni/admissions recruiting event for prospective law students from K-State and the surrounding area.