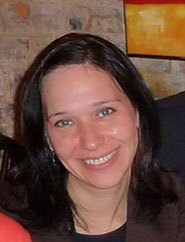 LAWRENCE — A University of Kansas expert on counterterrorism and human rights in Central Asia says democracy got lost in translation in this part of the world.

Democracy failed not only because of the region’s Soviet legacy and hardships of transition but also due to a lack of cultural competence among international agencies promoting democracy, says Mariya Y. Omelicheva, associate director of KU’s Center for Russian, East European and Eurasian Studies.

Omelicheva is completing a new book examining the failure of U.S. and European Union efforts to establish democratic governments in Central Asian states in the past 20 years. The new manuscript grew out of her research for her 2011 book, “Counterterrorism Policies in Central Asia.”

“I began to question the lack of progress in promoting human rights and democracy despite all the efforts, the money and human resources invested by the United States and other Western countries,” Omelicheva said.

Her new book, “‘Democracy’ for Central Asia? Perspectives and Strategies Promoted from Within and Without,” will provide the first comprehensive comparative study of the understanding of democracy within and outside of Central Asia.

Omelicheva has found that a combination of a lack of knowledge of the languages and traditions and a superficial understanding of cultures and attitudes within Central Asian states led U.S. and E.U. agencies to overestimate their ability to transpose Western political ideas.

“At the same time, the Western community has underrated the ability of the governments of Central Asian states to discredit Western institutions and promote their own ‘unique and indigenous’ models of development and democratization,” Omelicheva said.

Once part of the Silk Road cartography, Central Asia has long been valued as a bridge between Europe and Asia. Today the vast region is also valued for its reserves of oil and gas as well as its proximity to Pakistan and Afghanistan on the southern borders, Iran to the west, Russia to the north and China to the east. Although the region’s history is ancient, the independent states of Central Asia were carved out during the 1991 breakup of the Soviet Union.

“Knowledge of English exposes people to more sources of information – and to greater understanding. It increases opportunities for studying and traveling abroad. It is also by studying the concepts, such as democracy, in the language of political culture that gave them their meanings that these concepts can be better understood.”

To understand Central Asian views of democracy and Western efforts to promote it, Omelicheva conducted surveys and focus groups in three Central Asian states: Kazakhstan, Kyrgyzstan and Uzbekistan — interviewing people ranging from government officials to farmers and shopkeepers. Within those countries she found the need for economic development has priority over democracy.

In the turbulent transition from communism, all Central Asian governments chose economic development over political liberalization, Omelicheva explained. Many argue that security and order must be met before democracy can be established.

Her surveys revealed that “the people and governments view democracy as inappropriate and dangerous at this stage of development. In Kazakhstan and Uzbekistan, for example, they see the promotion of democracy almost tantamount to meddling in domestic politics by the United States.

“Democracy is a concept and just because someone knows the concept or word, it doesn’t mean it is understood in the same way in other contexts.”

U.S. leaders, for example, tend to view democracy as good for America therefore good for others. Russia’s government tends to view democracy as having the independence to be an equal world power and domestically free of outside interference. China regards economic growth and stability as the first order of business. Both Russia and China view relative economic prosperity as an important source of popular legitimacy. Both advocate for economic liberalization without relinquishing state control.

“Promoting democracy is a long process and it requires immersion into the societies and cultures,” that can be contrary to the U.S. approach, Omelicheva said.

“The U.S. focus is on expediency and producing measurable results such as holding an election or creating a multi-party system. There is almost a sense of superiority that by virtue of experience, the U.S. knows best. It can result in conflicts of purposes such as maintaining military bases or gaining access to energy resources in Central Asia rather than letting democracy theory work.”

U.S. foreign service policy can further hobble cultural immersion with limited term assignments in a country and a tendency in unstable countries by foreign service staff to avoid venturing outside diplomatic quarters.