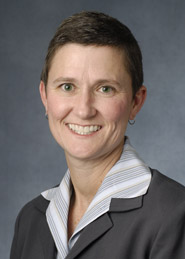 LAWRENCE — Most Americans are called for jury duty sometime in their lives. When they do, most citizens likely wouldn’t realize they have fewer rights than an accused criminal or “snitch witness,” testifying to get a lighter punishment.

Melanie Wilson, professor and associate dean for academic affairs at the University of Kansas School of Law, has authored and presented an article contending that potential jurors are so regularly exposed to privacy-invading, personal questions during voir dire — jury selection — that many are driven to lie or withhold information. She has also suggested a change to the way juries are selected to both take pressure off of citizens while maintaining the Sixth Amendment right to a fair trial by impartial jury, one of the mostly highly revered of constitutional rights.

“I think scholars agree at this point that we’re abusing jurors,” Wilson said. “We’re getting more and more jurors that aren’t disclosing information or withholding it. If we put enough pressure on these ordinary folks, they’re almost bound to lie.”

During voir dire, both prosecuting and defense attorneys question potential jurors, with the defendant present, to assemble a qualified jury each feels will be favorable for their cause. Depending on the nature of the case, jurors are often questioned about whether they have been victims of crimes such as rape or violence, their sexual orientation, their own criminal history and what television shows they watch. Potential jurors often don’t understand the relevance of such questions and have to divulge potentially embarrassing information in a public setting, often only to be struck from the jury anyway.

Jurors are rarely informed of their rights before being questioned. It is possible to answer questions in a “private setting” with only the judge, lawyers and defendant present. However, the Supreme Court has ruled that voir dire is part of the trial and therefore records must be made available to the public and media.

“It’s ironic that most people have fewer rights when they’re in the courtroom than they had before they went inside,” Wilson said, citing the example of a citizen’s right to not answer questions posed by police.

Juror dishonesty is difficult to quantify, but evidence of it happening is growing. Such dishonesty has the opposite result of the intention of voir dire. Litigants ask questions to uncover biases, but when potential jurors are led to withhold information, biased jurors are actually more likely to survive voir dire.

If a juror does lie and it is revealed during a trial, it can lead to declaration of a mistrial, and possibly to charges of perjury against the juror.

Wilson suggests changing voir dire by both informing potential jurors of their rights and offering them a chance to strike themselves. Under her suggested system, jurors would be able to recuse themselves from certain cases if they have a legitimate reason, such as not being part of a rape trial if they or a family member had been a victim of sexual assault. They would be returned to the jury pool and could be called for future cases without having to face aggressive, personal questions. The system would take pressure off jurors without completely relieving them of jury duty and result in more qualified juries, as litigants would be free to ask probing questions.

The system could be implemented a number of ways, Wilson said, either by legislation at the state level or simply instated by judges on the local level. Judges are the “king or queen of voir dire” and would be able to enact the practice in their courtrooms, Wilson said.

“You’re in a strange world where you don’t know your rights,” Wilson said of most jurors. “We should let them know what their rights are in advance. I want to change the incentive so at least they don’t feel like they have to lie.”

Wilson’s article on the subject, “Juror Privacy in the Sixth Amendment Balance,” will appear in the Utah Law Review later this year.