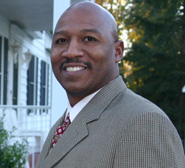 LAWRENCE — A journalist’s job is to tell the stories and document the history of a community as it happens. Jerry Crawford II, assistant professor of journalism at the University of Kansas, is working to determine how historically black colleges and universities continue to educate future journalists while facing the challenges that all higher education must endure, in addition to several unique problems that threaten the schools’ very existence.

Crawford has been presenting his research into how historically black colleges and universities, commonly referred to as HBCUs, achieve or seek accreditation in light of the unique challenges they face. Declining state and federal funding, high teaching loads, pressures from state governments, lack of tenure and high turnover are among the challenges he found.

“When we talk about HBCUs, we’re not just talking about schools, we’re talking about cultures, and it’s important we not lose them,” Crawford said.

Crawford, who earned his doctorate at Howard University, an HBCU in Washington, D.C., became interested in accreditation as a student. Finding very little scholarship on HBCUs, he began researching accreditation while a student and made regular trips to the Accrediting Council on Education in Journalism and Mass Communication, the organization that grants accreditation to schools of journalism, located at the University of Kansas. Last year he took a “research road trip” to HBCUs, starting in Delaware and traveling through Maryland, the District of Columbia, the Carolinas, Florida, Georgia, Alabama, Mississippi and Louisiana.

His purpose was to determine how HBCUs with journalism schools or programs operated their programs, not to criticize their quality of education, but to see how they provided equal opportunities for their students. There are just over 100 HBCUs in the United States, 55 of which have some sort of journalism program. There are 106 accredited journalism programs in the country, and nine of them are housed at HBCUs.

“I wanted to take a look at what accredited schools are doing to help determine best practices,” Crawford said. “And among the HBCUs, I wanted to ask, ‘How are these schools doing it?’”

Crawford made in person visits and conducted an online survey of more than 20 journalism administrators at HBCUs. He found many administrators and faculty members had large teaching loads, often as many as five courses per semester. Such heavy teaching loads kept many from raising funds for their departments or performing research.

“One of the main criteria for accreditation is the expertise of your faculty,” Crawford said. “When you’re teaching this much, there’s no time for any other scholarly activity.”

That finding was confirmed by 95 percent of respondents who indicated teaching is their primary duty. A majority of administrators were appointed to their positions, and more than 61 percent have held the job for five years or fewer. In addition to teaching, 57 percent indicated that they are both responsible for their unit’s budget as well as hiring faculty.

Crawford said the findings confirm the commitment of HBCUs to providing quality education in spite of their challenges. In some states, programs or schools have been closed due to proximity to larger institutions offering similar programs, and their necessity has been called into question in other areas now that race is not the barrier it once was to college enrollment. HBCUs still educate about 80 percent of African-American journalists working in America today, Crawford said.

“Historically black colleges and universities are facing challenges to their continued existence on several fronts,” he wrote. “It is an important question to face. If we lose these voices that aren’t anywhere else, we lose cultures.”