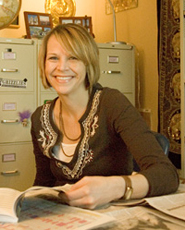 For two decades, the Cherokee Nation of Oklahoma has sought expertise to revitalize its language. Surveys count nearly 300,000 Cherokee citizens, but few under age 40 have conversational use of the language.

The language revitalization efforts have included creating a searchable Cherokee Electronic Dictionary of more than 10,000 entries and establishing a Cherokee Nation Immersion School in Tahlequah, Okla.

In the next two years language specialists will be working to enable anyone using the Cherokee Electronic Dictionary to hear words and phrases spoken accurately and authentically. The work is funded with three grants totaling just under $200,000 from the Documenting Endangered Languages program offered through the National Endowment for the Humanities and the National Science Foundation.

• Lizette Peter, a specialist in second language acquisition in KU’s School of Education who has worked with the staff of the Cherokee Nation Immersion School since it was established in 2001;

• Durbin Feeling, a Cherokee citizen and trained linguist who with William Pulte helped compile a Cherokee grammar and a Cherokee-English dictionary that has guided much of the revitalization work;

• and Dylan Herrick, a linguist at OU.

The goal is to improve Cherokee language proficiency and increase our linguistic understanding of tonal languages, Peter said.

“Cherokee is a tonal language, and a shift in tone or the length of a vowel, or both, can change the meaning of a word,” Peter said. Expressions for the term meaning “food or groceries” or “time to eat,” for example, differ only in the initial tone on the first and last vowels, for example.

“A unique component of our project,” Peter noted, “is that we pair fluent, native speakers with highly proficient second language learners to do the documentation work. This builds internal capacity for knowledge of the language.

“A related component is the creation of a ‘Cherokee linguistics,’ that is, a way of doing linguistic documentation work through the Cherokee language rather than English.”

In the first year of the Documenting Cherokee Tone project, Peter, Feeling and Herrick, along with colleagues in KU’s Applied English Center, Marcellino Berardo and Tracy Hirata-Edds, will focus on the recording and transcribing of audio for each entry in the online Cherokee dictionary.

In the second year, Peter and Hirata-Edds will develop materials and methods to teach second-language learners to hear and pronounce the distinctions of vowel length and tones. Hirata-Edds and Peter have worked to develop curriculum materials from preschool to sixth grade for the Cherokee Nation Immersion School. The school will be one site for the project’s teaching component.

The immersion school enrolls about 100 children, all learning Cherokee as a second language. Few of their parents learned Cherokee at home — due, in part, to U.S. government assimilation policies of the 19th and 20th centuries. Enforcement of those policies included punishing children for using their heritage language. Those children became the grandparents and great-grandparents of many of the youngsters attending the immersion school.

“For some parents it was a leap of faith to put their children in a school where all the content was taught in Cherokee,” Peter said. Many parents questioned how their children could expect to succeed in an English-speaking society if they learned their academic content in Cherokee.

The answer will become more apparent in 2012 when the current sixth-graders graduate to junior high school.

What Peter and her colleagues know is that being bilingual affords more advantages than disadvantages. They also know that all those involved in the language revitalization effort — parents, elders, linguists, tribal leaders — are committed to seeing the immersion school be successful.

Today’s efforts by the Cherokee Nation expand on work begun nearly 200 years ago by Sequoyah, the Cherokee silversmith and self-made linguist who wanted to be able to read and write his language as European settlers did with their languages. By 1821, Sequoyah had created a syllabary — more than 80 graphic symbols — representing the sounds of the language. Cherokee literacy flourished. At the time that they were removed to Indian Territory (Oklahoma), Cherokees were more literate than many of the European settlers.