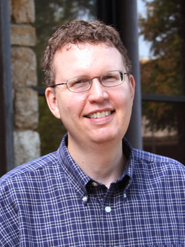 The award is named after Gene Budig, KU’s 14th chancellor. Budig and other donors established the teaching professorship to honor excellence in teaching writing. The schools of Journalism and Education share the award.

“Writing is critical to everything we do, not just in journalism but in society,” Ward said. “Writing reflects our thinking. If we’re not thinking clearly, that has huge ramifications.”

Journalism professor Susanne Shaw nominated Ward for the professorship. She says he spends hours meeting with students individually and works to make sure they are aware of the best internship and job opportunities possible.

“Any student who has been in either of his two editing classes raves about his teaching,” Shaw said. “Students say that their writing skills are much improved after taking one of Doug’s classes.”

“Doug Ward is a wonderful teacher who brings his love of words into the classroom every day,” said Ann Brill, dean of the journalism school. “His knowledge of the language rivals that of the famous editing teacher John Bremner.”

Ward received his bachelor’s degree from Kansas State University and worked at the Parsons Sun and Hutchinson News before joining KU as a graduate teaching assistant in 1989 while he earned his master’s degree. After his graduation from KU, he left to pursue his doctorate at the University of Maryland. While completing his degree, Ward worked as a freelance copy editor at the Philadelphia Daily News and Philadelphia Inquirer.

After receiving his doctorate in 1996, Ward worked as a staff editor for The New York Times. Ward says he felt his time as an editor helped him transition well into teaching because he tries to use the same method of working with his students as he did his writers.

“A lot of being an editor is not just being simply a teacher but a presence. It helps to be that one person who can be calm, because that instills confidence,” Ward said.

Ward returned to KU in 2004 to teach multimedia editing as well as research and writing. Ward’s colleagues say not only is he a talented editor, he is an excellent teacher dedicated to students.

Emily Ryan, who received her master’s degree from KU in 2007, was one of his students. She says he engages students using humor to invigorate the class, and is able to get them to look at their writing in a different way and help them gain a deeper understanding of the English language.

“He created a classroom setting that welcomed participation and established a venue for open dialogue about tricky concepts,” Ryan said. “His was a classroom in which an incorrect answer didn’t seem like a ‘mistake’ but rather a platform from which to launch discourse on the matter at hand.”

During Budig’s 13-year tenure as chancellor at KU, more than 180 faculty positions were established. Budig Hall is named in his honor. He left the university to become president of baseball’s American League and now is senior adviser to Major League Baseball. He also is the senior presidential adviser for the College Board and recently authored a book on the nine most interesting public people with whom he's worked. He and his wife, Gretchen, live in Isle of Palms, S.C.

Ward will give a lecture in spring 2012 on the importance of writing. The time and date for Ward’s lecture will be announced at a later date.