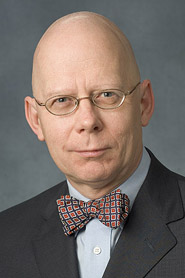 LAWRENCE – Robert C. Rowland, a communication professor at the University of Kansas, has been named the winner of the 2011 Douglas W. Ehninger Distinguished Rhetorical Scholar Award by the National Communication Association.

The Ehninger Distinguished Rhetorical Scholar Award is the NCA’s top research award in rhetorical studies and is designed to honor an outstanding scholar who has done research in rhetorical theory, rhetorical criticism or public address studies. The award is given to a scholar who demonstrates intellectual creativity, perseverance and impact on academic communities.

Rowland will be presented his award during NCA’s annual convention, which will be Nov.17-20 in New Orleans.

“The Ehninger award is very meaningful to me because it reflects nearly 30 years of my research on how rhetoric functions in human society,” said Rowland, who serves as director of graduate studies for KU’s Department of Communication Studies. “From Franklin Roosevelt to Ronald Reagan and now Barack Obama, we know that rhetoric matters a great deal in politics and throughout society. We turn to rhetoric for inspiration and meaning. But rhetoric is also quite dangerous, as the influence of Hitler and, more recently, Osama bin Laden, tragically demonstrates. Given the importance and power, but also the dangers associated with rhetoric, it is crucial that we understand how it works. That is the question that all of my research confronts.”

Rowland is no stranger to NCA awards. In 2006, he was presented the Donald H. Ecroyd Award for Outstanding Teaching in Higher Education — the NCA’s top teaching award — making him the second scholar to win the organization’s foremost awards for both research and teaching. The only other person to win both awards is former KU professor Karlyn Kohrs Campbell, who served as Rowland’s adviser and mentor when he was a graduate student at KU in the early 1980s.

“A review of Robert Rowland’s vita reveals a scholar-colleague who has resisted the temptations of selfishness, scholarly agendas that are narrow, if not narcissistic, and has served his university and the field with great generosity,” said David A. Frank, professor of rhetoric and dean of the Robert D. Clark Honors College at the University of Oregon, who nominated Rowland. “The roles Robert Rowland have played as department chair and in a number of other leadership positions and the awards he has received for his teaching and service place him among the very few in the academy excelling in scholarship, teaching and service.”

Rowland's major teaching and research interests are in rhetorical criticism, argumentation and the public sphere. At KU, he has received the Louise Byrd Award for Graduate Teaching (2000), the William T. Kemper Teaching Fellowship and the Bernard Fink Award for outstanding teaching, and he is a two-time HOPE Award finalist. He has received an Outstanding Service Award from the Kansas Bar Association based on his work in continuing legal education on legal advocacy. In November 2006, he was honored by the NCA with the Donald H. Ecroyd Award for Outstanding Teaching in Higher Education. In 2002, he and David Frank of the University of Oregon published “Shared Land/Conflicting Identity,” a book on Israeli-Palestinian rhetoric that was honored in 2003 with the Kohrs-Campbell prize in rhetorical criticism. A recent survey of journals ranked him among the 50 most published scholars in the discipline.

Rowland received his bachelor’s degree in 1977 from KU, where he was a member of the 1976 national debate championship team. He received his master’s degree from Northwestern University in 1978 and earned his doctorate from KU in 1983.

The National Communication Association advances communication as the discipline that studies all forms, modes, media and consequences of communication through humanistic, social scientific and aesthetic inquiry. A nonprofit organization, NCA has more than 8,000 educators, practitioners and students who work and reside in every state and more than 20 countries.