LAWRENCE — The University of Kansas Dance Company will present its Spring Concert online, highlighting the many stimuli people experience as they move physically and virtually through the world. Six KU Department of Theatre & Dance faculty members will present original choreography in contemporary, ballet and hip-hop dance styles. 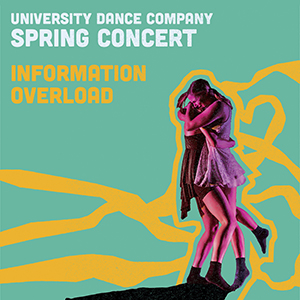 The free concert will debut online at 7:30 p.m. April 9 and remain available for viewing until 10 p.m. April 11. The link is available on the dance department's website, dance.ku.edu.

The UDC Spring Concert will also pay tribute to Patrick Suzeau, professor of dance, who closes a 31-year career at KU with his retirement in summer 2021. He will present “Be Still… And Feel,” a mixture of choreography and videography that explores isolation, from descent into darkness to ecstasy, and reflects the realities of the pandemic.

Michelle Heffner Hayes’ choreographed work, “Currents,” is inspired by concepts from traditional Chinese medicine and the dance professor's personal experience with the practice of qi gong. The title refers to the movement of water as well as electronic media current events. This screendance features scenography by Kelly Vogel, resident artist/academic associate, who is also credited for scenography on “Be Still… And Feel.”

James Moreno, associate professor of dance, also choreographed “Cubic,” which explores the relationship between humans and objects; more specifically, the objectification of humans and the merging of people and the technologies they use. Scenic and costume design for this piece is by Rana Esfandiary, assistant professor of scenography, and lighting design by Devan Ryan, BFA student in scenography from Lawrence.

Lecturer Ashley Brittingham will present her ballet “Fragmented,” inspired by the complicated emotions during an unprecedented era. Dancers represent piano and orchestra competing against each other by using angry broken chords in combination with lamenting melodies — but there is brightness. “Fragmented” features costume design by Vogel and lighting design by Ryan, who are similarly credited on “When, Where Does It End?”

Waeli Wang, visiting assistant professor, created “When, Where Does It End?,” a contemporary/modern work diving into the information superhighways of cyberspace. This original piece highlights the need to be always informed and the desire to always have one’s eyes “glued to the screen.”

Lecturer Maya Tillman-Rayton presents an up-tempo, three-section ensemble work titled “Messaging.” It is a commentary of current events, referencing the constant signaling of media figures and the effect it has on Americans by using 2000’s hip-hop culture. Rachel Bundstein, a senior in strategic communications from St. Louis, and Ryan are featured as costume and lighting designer, respectively.

All UDC Spring Concert videography is by Bryce Heesacker and Gary Lange.

The University of Kansas Dance Company’s Spring Concert is supported in part by KU Student Senate. The University Dance Company is a production wing of KU’s Department of Theatre & Dance. Information about its performances and auditions can be found at dance.ku.edu.