LAWRENCE — Two researchers from the University of Kansas Department of Urban Planning have just completed a study on the locations of assisted housing units and assisted households across the nation. It examines one of the key issues that drives the design of federal low-income housing programs, which is how well federal rental assistance helps people move out of impoverished neighborhoods into safer places with access to better schools and jobs. The study updates a similar one done in the late 1990s. 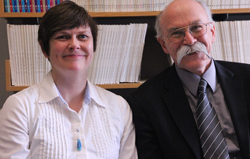 “Housing programs to help the poor have changed,” Professor Kirk McClure said. “For a very long time we measured our success by whether we provided families with affordable shelter. But we concentrated poverty in public housing projects and created many serious problems that also spilled over into adjacent areas. In the 1960s, we became very much more concerned about neighborhood quality.”

Today, large public housing projects are disappearing. Instead, people with extremely low income are using Housing Choice Vouchers to move into private rental housing. Under this program they pay 30 percent of their income toward rent and the program pays the difference. They may move anywhere they can find approved housing.

As another alternative to public housing, the federal government is subsidizing the development of privately owned housing complexes built under the Low-Income Housing Tax Credit (LIHTC) program. It gives tax credits to developers that offset the costs they incur to build housing that can only be rented to low-income tenants. The developer is responsible for finding sites, getting all of the approvals and permits, and the cost of constrction.

McClure and co-investigator Bonnie Johnson, associate professor of urban planning, attempted to determine which programs are doing the best job of helping low-income households to locate into high-quality neighborhoods.

“Our research turned up some surprises,” McClure said. “The theory had always been that if you hand someone a voucher they will follow their hopes and dreams and move out of an impoverished neighborhood. We found that the people with vouchers don’t move very far and don’t really improve their neighborhoods.

“However, we were distrustful of the LIHTC-based programs, where developers picked the location, because we thought they would locate in poorer neighborhoods and replicate the evils of the old public housing projects.”

Instead, the study found developers are building new low-income housing in the suburbs.

“Suburbs such as Olathe are often thought of as being the homes of not-in-my-back-yard, or NIMBY, residents that stop unwanted development," Johnson said. “So it was surprising to see developers successfully building low-income housing there. We speculate that a businessperson — a developer, for example — advocating for low-income housing from an economic development and profitability standpoint is perhaps more convincing than a fair-housing advocate arguing from an equity standpoint. Local political energy often follows the money.”

Housing Choice Voucher and Low-Income Housing Tax Credit programs have grown in importance since the 1990s and have improved their performance by moving more households into low-poverty, less distressed areas.

“Importantly, these active programs for assisted housing are beginning to find ways to overcome the barriers preventing entry into the suburbs. Still, much more needs to be done to help low-income people move into better neighborhoods and break the cycles of poverty,” McClure said.

The research was published in the journal Housing Policy Debate, the nation’s premier journal of housing policy and housing programs.