LAWRENCE – A team of University of Kansas law students captured the Best Draft Award at the national championship rounds of the 2017 Transactional LawMeet. 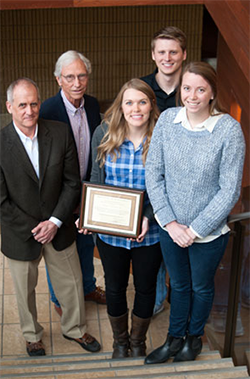 Aspiring transactional lawyers Jake Ediger of Topeka, Justine Koehle of Woodland, California, and Alison Kryzer of Wichita competed at nationals March 31 in New York City after winning a regional finalist title in Kansas City, Missouri. Their purchase agreement for the buyer’s side of the competition’s mock business transaction was deemed best in the nation.

“I am proud of our team for our hard work and dedication, and taking home the prize for best draft was a nice reward for the countless hours spent,” Ediger said. “Transactional LawMeet is perhaps one of the most practical and useful experiences I’ve had at KU Law. The skills gained from the contract drafting and negotiations will be directly applicable in my legal career.”

Transactional LawMeet teams represented either the buyers or sellers of a business. Over the course of two months, they drafted a purchase agreement, interviewed their clients and marked up opposing teams’ drafts. In February, 84 teams met at seven regional sites to negotiate a resolution. Two teams from each region were selected to compete in the national rounds. In New York, KU competed with teams from 11 other law schools, including UCLA, Georgia, Notre Dame and San Diego.

Competition judges included partners from leading law firms, corporate general counsels and other senior practitioners. They chose finalists after evaluating which teams most adeptly combined their lawyering skills, drafting, marking-up and negotiating techniques with their knowledge of corporate and other facets of business law and business sense to develop innovative solutions to negotiate a draft agreement.

“The national rounds were a great opportunity to gain feedback from experienced practitioners,” Kryzer said. “Each judge saw something new or different, so it helped to understand the nuances of the problem.”

Adjunct law professor Ken Lynn, Class of 1981, coached the team in preparation for the competition.

“I feel very lucky that KU Law is dedicated to supporting students interested in business and transactional law,” Koehle said. “I know we wouldn’t have achieved the same success without our faculty advisers and coaches.”