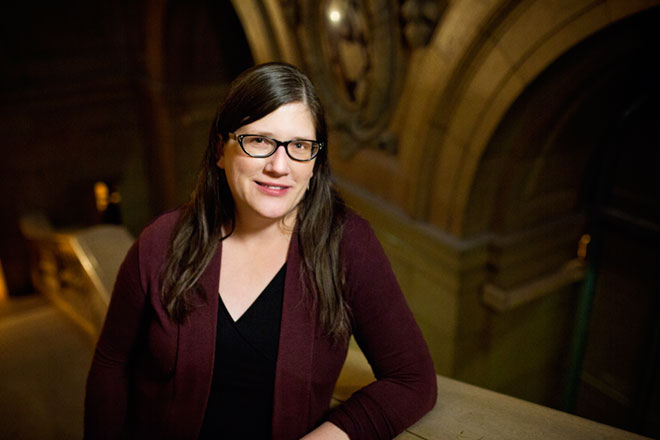 LAWRENCE – A MacArthur Fellow nationally recognized for her expertise on sexual violence in Indian country will offer legal strategies to improve outcomes for Native American women during a lecture at the University of Kansas.

Sarah Deer, the Fall 2016 Langston Hughes Visiting Professor at KU, will deliver “Gendering Federal Indian Law” at 3:30 p.m. Nov. 2 in the Kansas Union Ballroom. The lecture is free and open to the public. A reception will follow.

“Native women suffer from the highest rates of violence in the United States,” Deer said. “I have been studying this phenomenon for the last two decades and have ultimately concluded that a broken legal system is to blame. Under current law, tribal nations are not able to take appropriate action when violent crime occurs. I plan to explain how a feminist approach to these legal problems will yield more positive results.”

Deer is a graduate of both KU, 1995, and KU Law, 1999. She is currently a professor at Mitchell Hamline School of Law. This fall, Deer is co-teaching the Sex Crimes course and the Tribal Judicial Support Clinic at KU Law. She is also teaching a class on Feminist Jurisprudence.

“The Langston Hughes Visiting Professor program has done an outstanding job of bringing top minds to the University of Kansas,” Provost Neeli Bendapudi said. “Sarah Deer is bringing the full force of her expertise and reputation to the entire KU campus and leading challenging, timely and enlightening conversations.”

A citizen of the Muscogee (Creek) Nation, Deer has documented in her scholarship a history of inadequate protection for victims of physical and sexual abuse in Indian country. She has simultaneously worked with grassroots and national organizations to reform federal policies that hinder the ability of tribes to prosecute offenders. Her efforts were instrumental in the passage of the Tribal Law and Order Act of 2010 and the 2013 reauthorization of the Violence Against Women Act. In 2014, she was named a MacArthur Fellow by the MacArthur Foundation.

Deer recently published a book, “The Beginning and End of Rape: Confronting Sexual Violence in Native America,” and she participated in a conference hosted by the White House Council on Women and Girls.

“Since receiving the MacArthur fellowship in 2014, I have been focused on scholarship and activism that amplifies the voices of Native women – particularly those affected by violence and abuse,” she said. “During the last year, I co-authored two Supreme Court amicus briefs on behalf of Native women’s organizations.”

Deer’s next book project will feature the writings of young Native women who are working on social justice issues. Down the road, she plans to publish a book on indigenous feminist legal theory in American law.

“Having the opportunity to co-teach Sex Crimes and teach Feminist Jurisprudence at KU will provide even more foundation for that project,” Deer said.

The Langston Hughes Visiting Professorship was established at KU in 1977 in honor of the African-American poet, playwright and fiction writer who lived in Lawrence from 1903 to 1916. The professorship attracts prominent or emerging ethnic minority scholars to KU. This is the first Langston Hughes appointment for the law school.