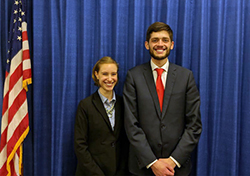 “Competing in the NNALSA Moot Court Competition has been such a rewarding experience,” Drouhard said. “I’ve learned so much from our coaches and other team members. Chris and I have worked as a team for three semesters. It was exciting to see all our hard work and growth rewarded with a win."

This is the fourth time in the past five years that KU Law has advanced to the final round of the NNALSA competition. KU Law teams brought home the national championship in 2016 and second-place finishes in 2015 and 2017.

KU Law brought four moot court teams to the competition, and all four teams competed in the Sweet 16 round.

“I am extremely proud of all of the KU teams that competed in this year’s competition,” said Professor Elizabeth Kronk Warner, team co-coach and director of KU’s Tribal Law & Government Center. “The fact that all four teams advanced to the Sweet 16 of the competition, beating out law schools from around the country, is unprecedented.”

In addition to Carey and Drouhard’s first-place finish, third-year law students Dan Kopp, of Belvidere, Illinois, and Nancy Musick, of Topeka, finished third overall in the competition and received an award for the second best brief.

“It was great to see all the hard work the team put in pay off,” Kopp said. “Professor Kronk Warner really prepared us well. The whole team worked extremely hard drafting the briefs and practicing daily until the competition.”

Two additional KU teams competed at the event, including Austyn Caisse, of Santa Cruz, California, and Lindsie Ford of Edmond, Oklahoma, as well as Brodie Herrman, of Manhattan, and Adam Lauridsen, of Lawrence.

The final rounds were judged by a panel of esteemed Indian law scholars and practitioners, including a circuit court judge for the U.S. Court of Appeals for the Ninth Circuit.

“The students’ success at the competition speaks volumes to their intelligence and dedication as well as to the commitment of KU Law faculty and staff to prepare students for this level of competition,” Kronk Warner said.

KU in the news
The Washington Post — Mon, 02/03/2020
Vladimir Putin follows a long Russian tradition of enlightened autocrats
National Public Radio — Sun, 02/02/2020
Making Super Bowl guacamole? Be careful to avoid the pits of an avocado hand injury
Research does indicate that pivotal response treatment benefits learners with autism. What is not clear, say… https://t.co/aNyRMVCjEW
«»
Follow us on Twitter »